A Revolution of Capital

Institutional philanthropy, whose self-appointed roles include providing risk capital for society, leading transformational change and addressing society’s greatest challenges, has not kept up and adjusted to the times. If we want philanthropy to stay relevant in today’s 21st century world let alone rise to the level of its soaring rhetoric, we must revolutionise our 19th century business model, operating precepts and conceptual frameworks to be fit for purpose. For owners and investors of significant stores of capital, the changes needed will involve a revolution of capital.

What will it take to change?

Becoming fit for purpose will require that we transcend our current practices and beloved assumptions. For example, the notion that non-profit organisations, using resources from government and philanthropy, can address today’s wicked problems is, on its face, absurd. The institutional and ideological frameworks that have driven social sector practices for years confine us to a ‘too little, too late’ world. Marginal fixes are doomed to fail. While grants can be powerful, they have never been adequate by themselves and are even less so today.

The very nature of the negative effects of 21st century technological change stymies conventional fixes. In mature economies, for example, dominant business models and methods now routinely shed human labour, cut out intermediaries such as retail shops, and consume small-scale businesses, bypassing a means for shared social prosperity and stability. Yet to cite one example, the US anti-poverty strategies that for generations relied on ensuring access to the economy falter when the reality of a contingent, unreliable and low-labour employment future looms on the other side of ‘access’. And beyond growing uncertainty about livelihoods in mature economies, multi-faceted problems such as climate change, wealth inequality and violent authoritarianism are rising globally, sometimes accentuated and enabled by technological innovation.

A few of us in private foundations are exploring new methods and models for our work but for the most part, and despite some tinkering around the edges, we are continuing to work in exactly the way pioneered by the Rockefeller Foundation in 1913 – a way possibly effective in mitigating some of the ill effects of the late 19th century US economy, but not those of the early 21st century global economy.

In our 1913 model, using our endowments is off limits as a means to advance our missions, and making grants is our primary tool. Tax compliance drives our decision-making. The larger economy outside our walls is a separate world, off limits for our work (except to the investors of our assets). In our world, for-profits are not a potential force for good – or anything, really, except pumping out financial returns that we foundations use to make grants and pay operating expenses. Inside our protective bubble, we take little responsibility for our asset owner’s role and have no accountability for our mission performance.

To be sure, our time-worn operating model, impact assumptions and opaque endowments are comfortable. They help us stay calm in today’s choppy seas, regardless of apparent dangers. In our tidy world, problems can be isolated, blame dispensed, and solutions doled out within the safety of tight logic models, confident theories of change and blizzards of bespoke metrics. We focus on known variables and declare success through self-determined measurement schemes. Grants are exhaustively vetted, highly competitive and scarce. We invest our assets for maximum financial return, regardless of mission risk, cost or benefit. Processes are elaborate. A bit like the upstairs world of Downton Abbey, routines endure, disturbances are swiftly muted, and order prevails within, despite the continuous fraying of the curtain that hides the changing, roiling world beyond.

In my view, we in institutional philanthropy – particularly in private foundations – need to connect and be connected fully within and beyond our walls, assets and operations. We are positioned to take an active and leading role in a revolution against traditional practice. 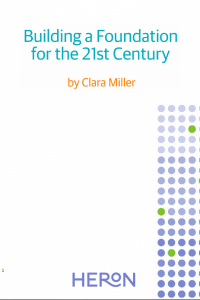 Perhaps in another era, a revolution of capital – of the system against itself – would have been unnecessary. As I noted in my essay, Building a Foundation for the 21st Century:

‘Possibly the current operating model of the private foundation was logical in an era where economies were subject to the “pull of place,” when business owners lived near their workers and were visible in the community; where shared “enlightened self-interest” was manifest and actionable; and where problems seemed bounded by geography (such as transshipment points), political sub-divisions and mid-20th century technology.’ 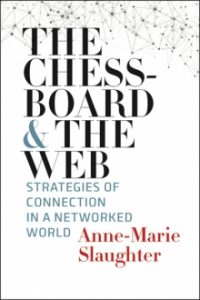 But that model can neither prevail nor take a serious run at today’s wicked, systemic, non-sequential problems. The world it was built to serve has changed, the place-based businesses at its centre are often unrecognisable when compared to their modern versions. The institutions that then seemed permanent are rapidly dissolving and reconstituting themselves. What was once an us-versus-them world of dyadic relationships, linear logic and sequential cause and effect problem-solving still exists, but it is rapidly giving way to the interactive world of ‘complex interdependence’, a multi-party, non-sequential and continually interactive and networked world. Anne-Marie Slaughter writes in her recent book, The Chessboard and the Web:

‘Think of a standard map of the world…showing the borders and capitals of all the countries. That is a chessboard view. Now think of a map of the world at night, with the lit-up bursts of cities and … the dark swaths of rural areas and wilderness…that is a web view. It is a map not of separation, marking off boundaries of sovereign power, but of connection, of the density and intensity of ties across boundaries… [the latter] is the world of many of the most pressing twenty-first-century global threats. That ever-changing map is the frontier of our age.’ 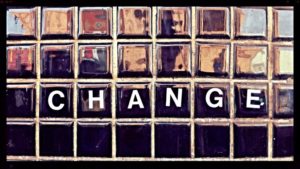 ‘Change the nature of our own model and practice, radically’ Photo: MSAG (CC BY-NC 2.0)

In my view, we in institutional philanthropy – particularly in private foundations – need to connect and be connected fully within and beyond our walls, assets and operations. We are positioned to take an active and leading role in a revolution against traditional practice. We come from wealth and are connected to power, but we are legally and morally bound to serve public missions. We are dependent on a business model focused largely on investing, yet are active among mission-oriented non-profits, social enterprises and other allies who may be less directly connected to businesses and the markets. And we are uniquely suited to simultaneously take on mission with commerce in mind and undertake commerce through the lens of mission. We can connect those dots in an era of state capitalism on the one hand (China) and government as ‘client state’ on the other (US), where solutions lie in the mobilisation of widespread, complex networks, not in primarily transactional and siloed operations where us versus them could be a winning strategy. In the words of Walt Kelly’s Pogo, ‘we have met the enemy, and he is us.’

So how can philanthropy be the change it seeks? First, we must conceive of our theatre of operations differently, with a larger cast and more expanded stage on which we are one of many actors. We must think of every enterprise – government, non-profit, for-profit, cooperative and more – as a potential ally. We must model a fundamental rather than a marginal philanthropy.

Poverty, climate change, violence and similar ills are systemic, geographically unbounded and multi-sector. We lack the time or the resources to work only transactionally. Urgency dictates that we use ALL our capital, we pull everyone into the game – big public companies, small businesses, non-profits, government, individuals and more – and that we operate as agents of connection through financial, social, reputational, moral and more forms of capital in a world in flux.

Philanthropy is a way of life, it’s not an afterthought or something apart, to be done tomorrow, outside of work or business, with a grant or a gift. We know that at its heart, philanthropy is not really about grantmaking. It’s about the way we live our lives, invest our capital, manage and do business. If we can make our institutions of philanthropy fit for a networked world, we will be truly revolutionary. 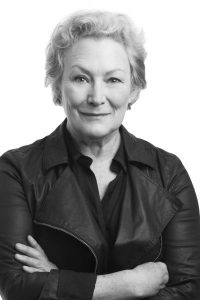 Clara Miller is President Emerita of the Heron Foundation, which helps people and communities help themselves out of poverty. Prior to this, Clara founded and served as President and CEO of Nonprofit Finance Fund.

Clara serves on the boards of the Sustainability Accounting Standards Board, Family Independence Initiative, and StoneCastle Financial Corp. She is a board member of the U.S. Impact Investing Alliance and is a BridgeSpan Fellow. She was named to Nonprofit Times “Power and Influence Top 50,” several times and Inside Philanthropy’s 50 Most Powerful Women in U.S. Philanthropy twice. In 2017 she was named Social Innovator of the Year by the University of New Hampshire.

In 1996, Clara was appointed by President Clinton to the U.S. Treasury’s first Community Development Advisory Board. She also chaired the Opportunity Finance Network board and was a member of the Community Advisory Committee of the Federal Reserve Bank of New York for eight years. She was a member of the inaugural Nonprofit Accounting Advisory Committee of the Financial Accounting Standards Board.

I came across this article through Andrea Levere, and the "Charting the Next Wave of Equitable Finance" convening. Very interesting. I like the boldness. And agree that we need to think "revolution" instead of (or at least as well as) evolution. Both at Kiva.org previously, and Wefunder.com currently, I've been working on trying to rearchitect our financial systems leveraging democracy. Happy to chat more about lessons we've learned, and directions we're heading in, if there's interest.

Brilliant article and so fitting in today’s growing world of “wicked” issues which sadly many don’t see coming, or loll across borders to know they’re here. Some are right at home. This article on Catalytic Philanthropy complements Clara’s good points. https://www.greenbiz.com/article/how-catalytic-philanthropy-could-solve-global-waste