Civil society more than the sum of CSOs

In trying to understand and grasp what civil society is and how it can be strengthened, those who seek to support the sector may have been looking in the wrong places. This is one of the startling conclusions suggested by the 2008-11 CIVICUS Civil Society Index (CSI) project. This conclusion is endorsed by the events of the so-called Arab Spring, which suggest that the real strength of civil society lies not in civil society organizations (CSOs) but in more informal groups and in the emerging forms of online activism.

Implemented jointly by CIVICUS: World Alliance for Citizen Participation and a range of national partners, the project saw a comprehensive civil society self-analysis carried out in 35 countries in Latin America, Europe, the Middle East and North Africa, Sub-Saharan Africa, and Central and East Asia. The CSI gathered perspectives on civil society from over 30,000 members of the public, more than 4,000 CSO representatives and over 1,000 experts on the sector.

What the findings of this mammoth exercise tell us is that CSOs face numerous challenges. These include volatile and changing conditions for their operations; limited and generally unsatisfactory relations with the state; difficult and often worsening financial and human resource bases; and low levels both of public trust and of public involvement in their activities.

Looking at the sector through CSO-tinted glasses

Yet the findings also reveal that while visible, organized civil society is in a parlous state in many countries, there is an active and healthy culture of participation that takes place outside familiar CSO activities. In almost every country surveyed, informal participation – whether community voluntary work, involvement in shared activities or individual acts of political activism – outstrips membership of formal CSOs.

Across all CSI countries, only 14 per cent of the public are actively involved in advocacy, human rights or humanitarian and charitable NGOs, along with trade unions – the types of CSO that receive most attention and most support from funders. Yet almost double this figure, 27 per cent, are active in cultural, sporting, recreational or religious associations, and almost half of all those surveyed, 47 per cent, associate and participate less formally, outside organizational structures.

This less formal participation often goes on at a village or community level, and the sources of its inspiration may sometimes be traditional and conservative, but still this overlooked, under-acknowledged participation is quietly generating social capital.

What this implies for those with an interest in the sector is that a rigid organizational lens may not be the best way to understand participation and activism, and that established views of what constitutes a CSO worthy of engaging with need to be broadened.

The growth of online activism

Alongside these less structured forms of participation, new types of online citizen activism have recently emerged, enabled by newly available technology and the rise of social networking. There is no question that technology has spread: according to World Bank development indicators, in the CSI countries mobile phone subscriptions stood at around 90 per cent by 2009, while internet access leapt from around 22 per cent to 30 per cent in just two years.

Online activism, often located in cities and involving young, educated people, has played a large part in the recent waves of protest in the Middle East and North Africa, enabling both rapid mobilization and reorganization of protest on the ground. It has also allowed unmediated international outreach, solidarity and recruitment of supporters abroad to exert pressure on their governments to curtail a tradition of quiet support for repressive regimes.

Both of these forms of association, relatively neglected by donors and others with an interest in the sector, have one thing in common: they largely bypass organizations as they are traditionally understood. They involve people making things happen on their own, without the impetus or support of CSOs. 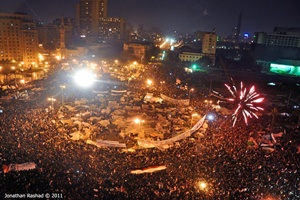 In the Middle East and North Africa (MENA), Egypt (pictured: protestors celebrating in  Tahrir Square, Cairo on 25 January) provides a good example: forms of protest rooted in traditional, religious spaces, such as the mosque and the forum offered by the Friday sermon, combined with online activism to mobilize people sufficiently to change government but largely sidelined established CSOs.

MENA was the CSI region with the lowest rates of membership in CSOs, with only 5 per cent of the public active in politically oriented CSOs and 6 per cent in socially oriented CSOs, compared to 27 per cent of people taking part in less formal associational activities. A focus purely on organized CSOs would suggest that what has just happened in several MENA countries shouldn’t have happened. In fact, the recent uprisings caught most agencies by surprise.

Preventing history from repeating itself

The worry of course is what happens next. Positions in Jordan, Syria and Yemen are polarizing and hardening, an armed struggle is under way in Libya, and failure to follow up revolution in Egypt and Tunisia is creating frustration. There is also a rush by donors to the region.

As the CSI reminds us, we have been here before. It draws from a number of countries that saw the last wave of civic revolution, in the former Soviet Union and former Yugoslavia. In the CSI, civil society in those countries reflected on the experience of sudden significant investment in the sector, and the legacy this has left. The reports from countries such as Bulgaria, Georgia and Kosovo all show a rapid and unsustainable burgeoning of the sector, a proliferation of opportunist CSOs which have folded as donor fashions changed, and the tendency of the sector to espouse projects that reflect donor interests. Formal participation in CSOs and public trust in civil society are now lower than global averages. Many saw civil society as an import, and it is questionable whether as a result it has taken strong root. Further, if the purpose of supporting civil society was to grow democracy and prevent a return to authoritarian rule, then in many countries, with repressive governments re-emerging, it has failed.

The challenge for donors

The fear in the case of MENA must be that these mistakes will be repeated. Egypt and Tunisia already show the risk that elites will simply rotate, and the growth of sectional violence. Donors need to look for effective and well-informed CSOs, with strong local legitimacy and the support of the activists who forged the revolution, but also with the ability to stand outside sectional interests and to play a crucial watchdog role over the new wielders of power.

Another challenge for donors is presented by the non-institutionalized forms of participation discussed above, which cannot be supported through traditional funding approaches. How can this new part of civil society best be supported without institutionalizing it and thereby damaging its special nature?

One conclusion the CSI suggests is the need to reinvent definitions and visions of civil society. Donors, governments and CSOs themselves must stop making CSOs a proxy for civil society. In doing so, not only are opportunities missed for joined-up activism, advocacy, policy shift and social change, but also people who are already engaging on their own terms are effectively disenfranchised.

A second conclusion the CSI points to is the need to invest in building broader coalitions between established organizations and less formal associations. The question for follow-up is how can broad-based coalitions of mutual support be built between people participating in traditional, community-oriented ways, new loose associations of interest on the internet, and established CSOs as brokers, convenors and shapers of activism?

CSOs need to address their remoteness from other parts of civil society and renew their relevance by positioning themselves as hub organizations at the centre of a broad, deep but diffuse web of participation and activism that disregards the fuzzy boundaries between civil society, families and individuals. Donors and funders need to support mutually respectful processes that allow these different constituencies to come together in ways they have not done before, and to develop new ways of working that draw from the strengths of each.

The prize at stake is the invention of a new, truer form of civil society that offers citizens who wish to associate at different levels multiple pathways for activism and participation. The danger of not addressing this is the sector’s potential slide into irrelevance.