Since 2012 more than 100 laws have been enacted by governments around the globe to restrict registration, operations and funding flows from and to non-profit organisations. Though the type and severity of restrictions vary, the ‘space for philanthropy’ has become a major and growing concern within the philanthropic community.

Earlier this year, Alliance partnered with the European Foundation Centre to learn more about the issues by inviting philanthropic actors and organizations to respond to a specially tailored survey. Our survey attracted 76 responses. Two thirds were from foundations while the remainder were philanthropic networks and associations, international NGOs and others.

Survey responses were analysed by Centris, a research and social policy organization with expertise in survey design and analysis. The results published today by Alliance and the European Foundation Centre provide illustrative snapshots of the key drivers of restrictions and the impact of these restrictions on institutional philanthropy. Barry Knight presents the main findings.

The survey attracted 76 responses covering 29 areas of the world. Given the response rate, we cannot claim comprehensiveness or suggest that results are representative of the wider sector. Results given here should be seen as illustrative of conditions in selected places, rather than giving a definitive account.

Notwithstanding this caution, the results describe the lived experience of many leading philanthropic actors and give examples of strategies that they have adopted to deal with the problems. While numbers are relatively small, they are sufficient to enable some advanced statistical analysis and to reveal some patterns in the behaviour. The findings described here may enable philanthropic actors to learn from the strategies of their peers and to prompt more detailed studies in specific countries and regions.

What restrictions do philanthropic actors face?

Two-thirds (51 of 76) said that they were experiencing external restrictions in pursuing their funding objectives or carrying out activities, while the remainder said there were no difficulties.

The survey probed into the kinds of difficulties that organisations were facing, asking those people who answered yes to the question about whether they were experiencing difficulties to give more detail on 17 different aspects of closing space. Respondents were asked to use a five-point scale with ‘extreme difficulties such that we cannot operate’ at one extreme to ‘no difficulties’ at the other. Intermediate points included: ‘very difficult but we can just about operate’, ‘some difficulties and we can function reasonably well’ and ‘slight difficulties but nothing that we cannot get around easily’.

The proportion of people who gave the ‘extremely’ or ‘very’ difficult responses for each of the items is in the following chart: 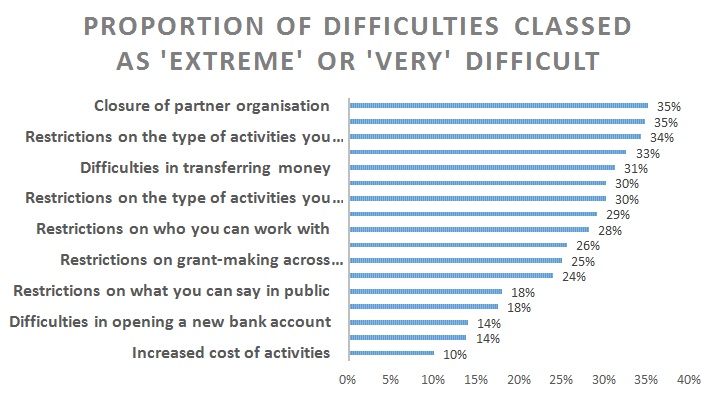 The survey shows that the problems identified in the table above are concentrated in certain places. According to respondents , countries such as Austria, Bulgaria, Colombia, Norway, Switzerland and the US appear to be relatively free from difficulty. Places such as Brazil, UK and India, attract mixed responses with some people saying that there are difficulties and others stating there are no real restrictions. Other countries, for example Russia, Egypt and China, are seen as uniformly difficult. Based on our statistical analysis, we were able to construct a scale of closing space as experienced by the respondents with Egypt, Pakistan, Ethiopia, Vietnam and India coming out as the top five countries affected.

What motivates these restrictions?

How are philanthropic actors responding?

For those experiencing difficulties, we asked ‘How are you responding to counter restrictive laws, measures, and practices?’ Respondents were asked to say whether they were ‘highly active’, ‘quite active’ or ‘not active. Almost four out of five organisations in affected areas said that they were either ‘highly active’ or ‘quite active’ on one or more actions aiming to counter closing space.

The types of actions and the level of activity is shown in the following chart:

Deeper analysis of the data reveals that there are three characteristic strategies philanthropic actors use to address closing space. The first involves supporting civil society actors to address the problem; the second is to take action with the authorities and agencies concerned; and the third is to withdraw and wind down. We will take each of these in turn and relate each approach to examples given by the Philanthropic actors in response to our final question, which was to ask: ‘Can you share a specific example of how you contributed to countering a restriction?’

Taking the indirect approach first, this was the most common way of approaching the issue. Tactics commonly involved an integrated capacity building strategy for civil society that comprises research, advocacy and dialogue. Examples of this approach include, in the words of respondents:

‘Funding an organization undertaking research on impact of restrictive CSO laws and developing examples of how to strengthen civil society work within the challenging context.’

‘We have not contributed directly in countering a restriction, but are disseminating information that foreign funders might find useful given the threat of legislation that would restrict funding flows.’

‘Capacity building to ensure organisations comply with all legal requirements.’

‘The capacity building we organised was aimed at briefing around twenty civil society organisations from across the country who have emerged as potential leaders on civic space issues. The convening was used to brief them on the national, regional and global context (including drivers) of the closing space, comparing proposed legislation to international standards, and to expose them to how civil society in Nigeria, Kenya and Uganda has responded to similar restrictions in their context. The convening culminated in activists developing common positions and agreeing strategies and next steps.’

‘Through continued engagement with our grantee-partners, that are working using rights-based framework.’

The second approach involved direct action with legislators, banks or other relevant organisations, as well as litigation and various forms of advocacy. Examples include:

‘We briefed Lords, signed a joint letter with other NGOs, wrote blogs and planted press stories to try and counter the Lobbying Act.’

‘Regarding the previous and the current tax reform proposal, we have been working close to the Government in order to draft a good proposal that allow the enhancement of the philanthropy under a transparent and accountable environment’

‘Advocating for a better regulatory environment for philanthropy, in particular regarding taxes.’

‘Lobbying the constitutional drafting committee to lift ban on establishment of endowments through a new article.’

The winding down option was different from the others because it did not take the form of active support to civil society or lobbying the government. Indeed, it was the obverse of this, involving a withdrawal strategy. Happily, this was the least common approach taken.

Reflections from the field

These illustrative findings provide growing evidence of concern about the phenomenon of closing space. Alliance Extra will publish responses from across the philanthropic world on 24 May and in our June issue. For more information around funders engagement in challenging the closing space, see the EFC/Ariadne/ IHRFG guide.

Oops: we made the non-profit impact revolution go wrong