To link or not to link – insights from corporate foundations

More than 80 representatives from corporate foundations and national foundation networks – the very first gathering of corporate foundations from across Europe – came together on 5 and 6 December at the INSEAD campus in Fontainebleau at the invitation of DAFNE, the Donors and Foundations Networks in Europe, and CFF, the Centre Français des Fonds et Fondations.

It was entitled ‘Corporate Foundations Knowledge Exchange’ and it lived up to its name. Links were forged, a common identity began to take shape and the central issue for the corporate foundation sector in Europe was brought to light – the relationship of corporate foundations with their founding company. 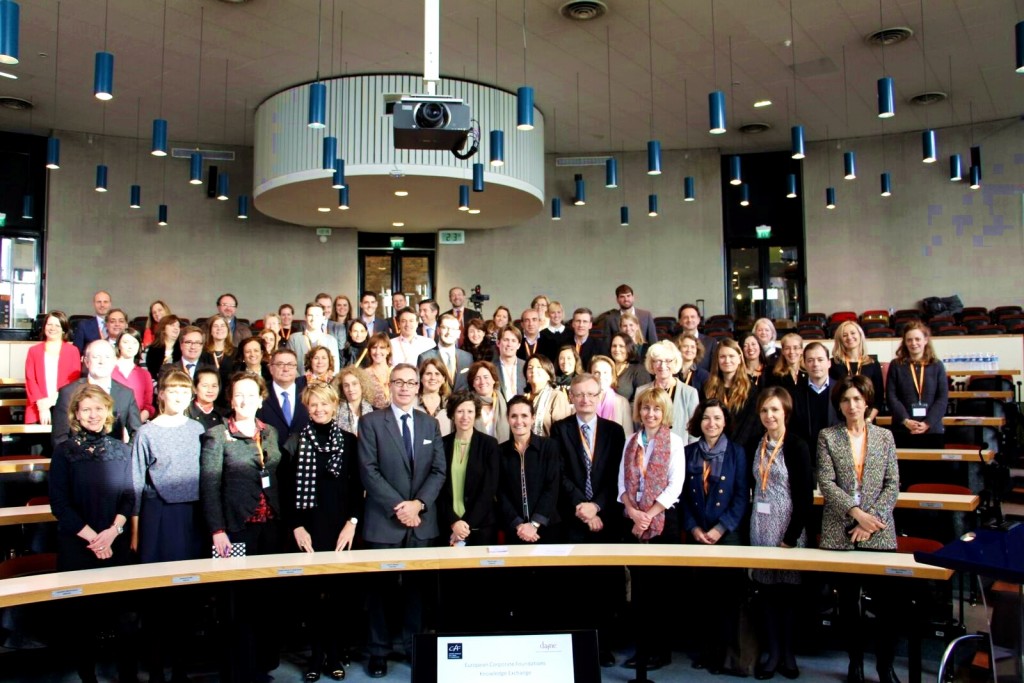 Opening the conference, both Beatrice de Durfort, the Delegate General of CFF and Rosa Gallego, the Chair of DAFNE outlined the importance of this first meeting as an excellent opportunity to connect corporate foundations on a European level and the role of DAFNE as an informal networking platform of 25 national foundation associations in Europe. They were followed by Eric Ponsonnet, Director General of the Fondation INSEAD and Craig Smith, INSEAD Chaired Professor of Ethics and Social Responsibility.

According to Professor Smith, the role of corporate foundations in the CSR research field is still new, even though it is an emerging trend. CSR and sustainability itself has evolved from a marginalized activity to an important concept for a company’s operations. Today there is much more recognition of the fundamental and strategic role of CSR in a company’s environmental and social impact than in the early 2000s. 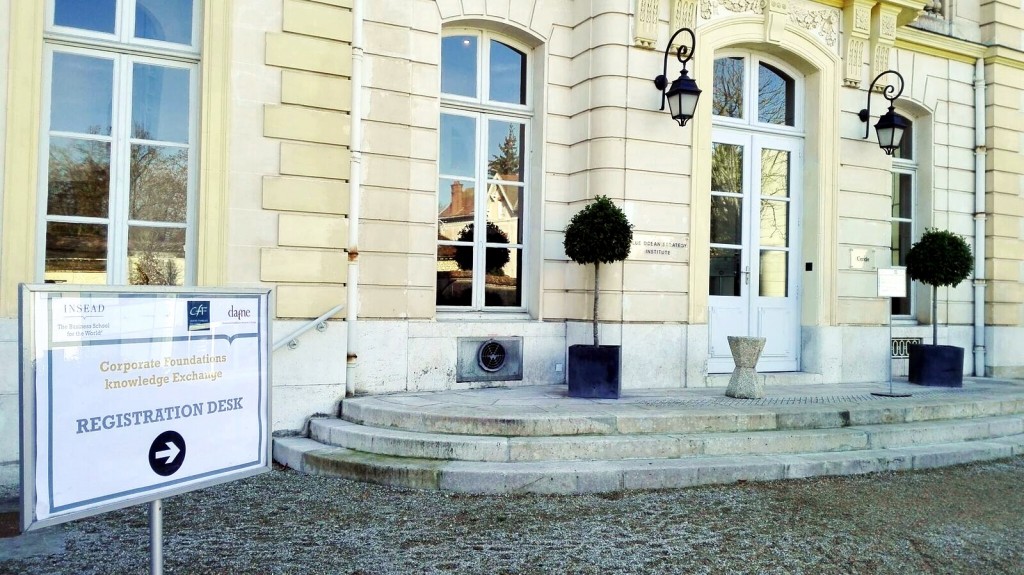 Research now gives more attention to the idea of creating shared value, the concept whereby business should create social and economic value simultaneously – a win-win situation for both sides. Nevertheless, making the business case for CSR or sustainability is not simple and sometimes even not possible. This is where Smith identifies an opportunity – possibly even an emerging trend – for corporate foundations: first, to work on social and environmental issues with a truly long-term commitment.

Second, even though foundations’ activities are defined by their statutes they have the ability to act with greater legitimacy, greater independence and even greater honesty than the founding company.

Third, a corporate foundation is able to continue its activities much more easily in times of economic difficulties than the founding company because of its legally independent set-up and long-term nature. Closing his academic snapshot, he sees an important and growing role for corporate foundations to address social and environmental issues in ways that complement, and will go beyond, strategic CSR and sustainability.

In the following opening plenary session Amanda Jordan, Chair of the Trustee Board of the Association of Charitable Foundations (ACF) and Co-founding Director of Corporate Citizenship, gave an overview of the European corporate foundations environment and challenges. 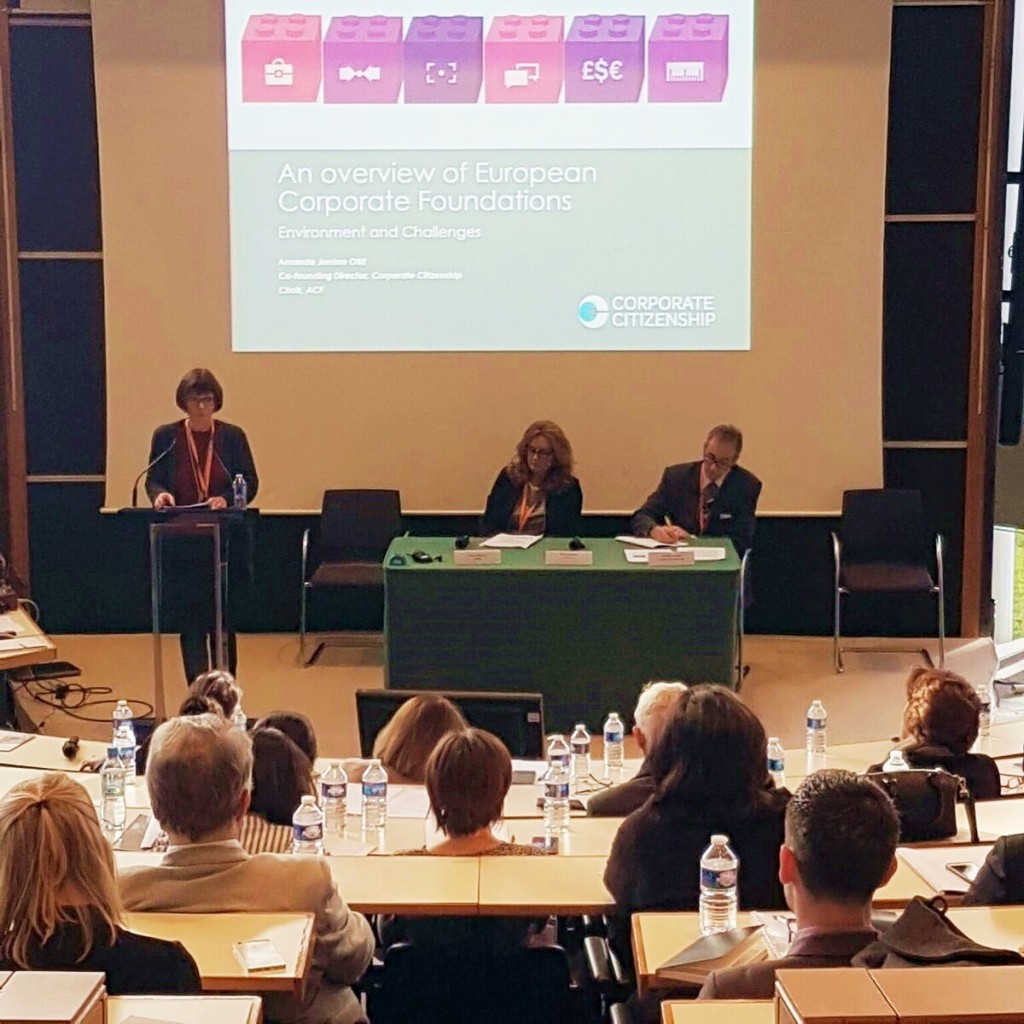 Amanda Jordan, Chair of the Trustee Board of the Association of Charitable Foundations.

All corporate foundations, she said, are united by four challenges: legal requirements that sometimes become a barrier to the foundation’s mission, lack of funds, reluctance on the part of trustees and persistent expectations from a wide range of stakeholders which makes it difficult for a corporate foundation to keep its focus.

Anne Ramonda, Executive Director of the Social Economy and not for profit Department at Ernst & Young, continued with an intriguing presentation about corporate foundations in France. The discussion afterwards gave the chance to share perceptions about trends – for example cooperation between corporate foundations and NPOs or foundations set up by entrepreneurs and finally the use of social media to create a social movement without the need to set up a foundation, a development which challenges the system itself.

Corporate Foundations market place
The main protagonist of the late afternoon session was a bell, wielded by James Magowan, the Coordinating Director of DAFNE and moderator of the conference, who promised delegates that they would be sick of its sound by the end of the session, which had the format of a marketplace. Participants gathered in small groups and rotated every ten minutes to a new ‘vendor’. 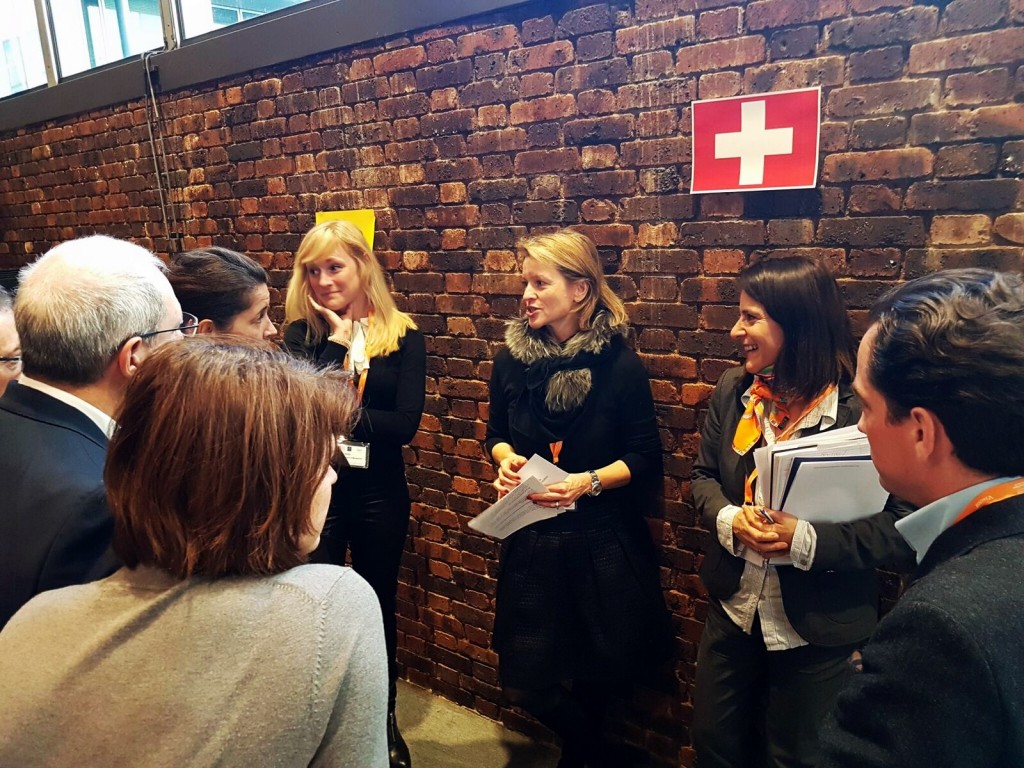 Delegates at the conference ‘marketplace’.

Each of the seven positions in the circle represented a country where the national association of foundations and a corporate foundation from the country teamed up. Information about the specific national background gave the context of the following presentation of one corporate foundation.

These were among others the Michelin Corporate Foundation from France, the Orange Foundation from Poland and the Innocent Foundation from the United Kingdom. Magowan kept his promise about the bell and participants in the marketplace would have definitely liked more time to intensify the exchange and discussion.

Several key issues emerged from among all groups: good governance, impact measurement, the composition of the board and the selection of beneficiaries.

A closing plenary discussion afterwards gave the opportunity to reflect together on these key issues and to share ideas of what is needed to advance the work of corporate foundations.

Governance
The second day started with an interactive workshop. Lonneke Roza from the Rotterdam School of Management at the Erasmus University Rotterdam and Steffen Bethmann (one of the authors of this text) from the Center for Philanthropy Studies at the University of Basel asked what effective governance of corporate foundation means. 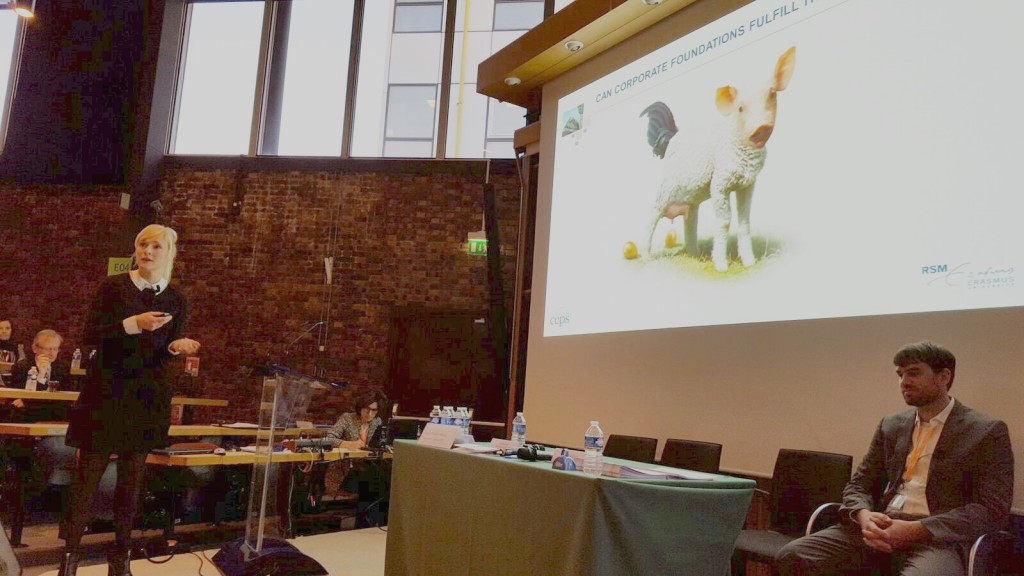 Lonneke Roza from the Rotterdam School of Management at Erasmus University, Rotterdam.

After all, corporate foundations are strange animals. As independent legal institutions they are obliged to fulfill a public purpose and seek effective ways to achieve their mission. However, as corporate foundations are almost never truly independent they are also subject to ‘for-profit market logic’. In their public and private capacities, they are serving different masters whose interests might not always be the same.

A somewhat similar point was made by Andrew Milner and Charles Keidan in their article on corporate foundations in the last edition of the Alliance magazine. 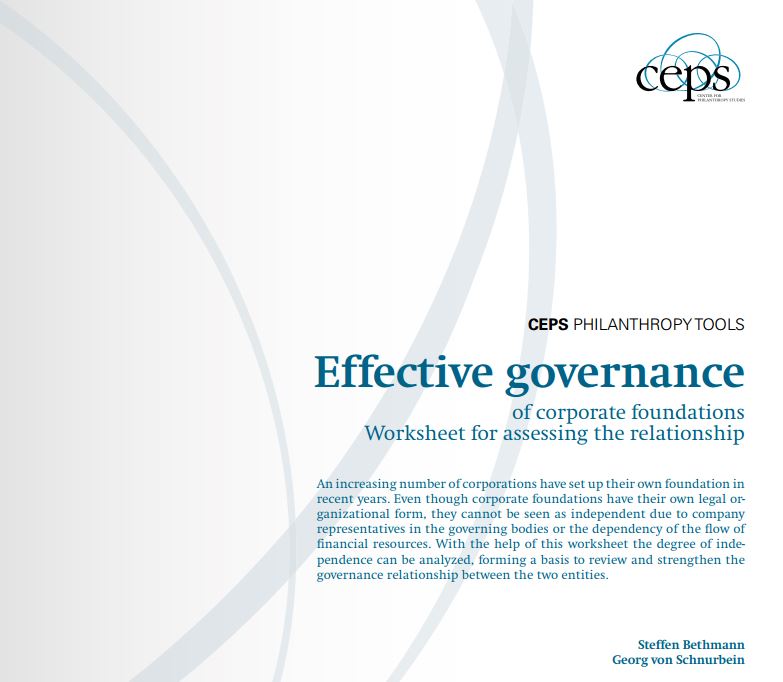 Foundation representatives were asked to rate the degree of independence from the funding corporation on a worksheet.

The variables were organized by the topics: board composition, foundation staff, operations, funding, in-kind donations and public appearance. Connecting the dots on the work sheet gave a visual representation of the governance structure, which enabled comparison between foundations[1].

None was necessarily better than the others. Corporate foundations have to find the governance model that best helps them fulfill their aims – while taking corporate interest into account. The open discussion, however, showed a trend for corporations to integrate foundations more closely in economically difficult times. 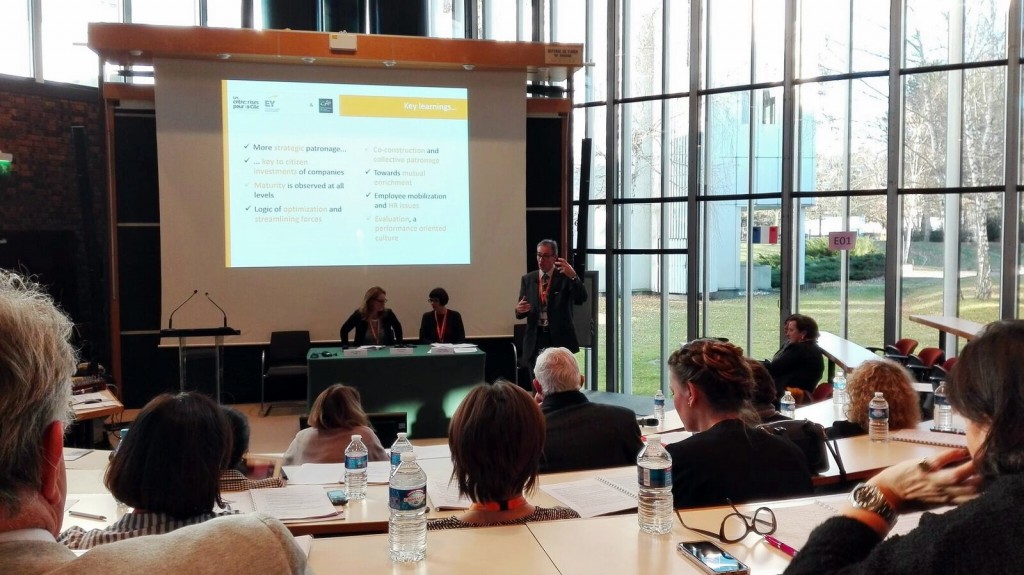 This may have some negative implications for the freedom of the foundation, but it can also lead to new opportunities. Some foundation managers talked about new interest in the foundations. Being able to make a strong case about their impact and benefit for the company’s reputation enabled some to get more funds and greater access to company resources.

In general, though, almost all agreed that long-term funding contracts between the corporation and the foundation are essential for the foundation’s ability to plan its programmes.

Mission alignment
The engaging discussion spilled over into five working groups on areas including education, solidarity between different population groups, and arts and culture which allowed the foundations to group around their missions. The overarching topic was mission alignment between the corporation and the foundation.

Here again, the active involvement of all the participants was a thread that ran throughout the conference. In each workshop a representative of one national association played the role of moderator while two foundations presented their work. Lloyds bank’s mission, for example, is to ‘Help Britain Prosper Again’.

The Lloyds Bank Foundation (LBF) explained how it had picked up the motto, but in a complementary manner. While the bank has a presence on almost every high street, the foundation concentrates on the most vulnerable of society, supporting people in the back street – following its own mission of ‘breaking disadvantages – bettering lives’.

The mission of the Syngenta Corporation and the Syngenta Foundation for Sustainable Agriculture foundation are more closely aligned. Both aim ‘to feed the world’. The company is doing so by increasing the productivity of medium and large farms. Syngenta’s prime products are pesticides and seeds. The foundation however, concentrates on pre-commercial farmers in the developing world. It provides them with knowledge and expertise, helping them to make a living out of their land.

Both examples lead to one of the most discussed questions of the conference: how far can and should the missions of the corporation and the foundations overlap? On the one hand, close alignment might be seen as an attempt to use the foundation to increase company profits.

On the other hand, an aligned mission may help the foundation to leverage the expertise and networks of the corporation to achieve its aims. Black-and-white thinking does not seem to be the answer. What became clear though is that a strong but dynamic mission statement allows a corporate foundation to strengthen its proper identity and hence its ability to concentrate on the social impact it strives for, however close the alignment with the founding company. 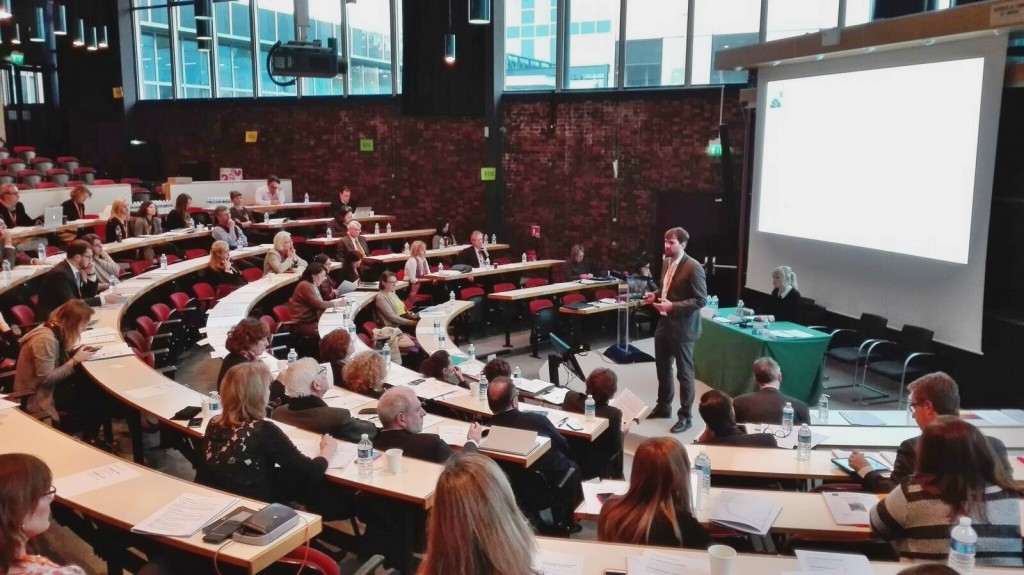 Even though both are striving to do good, CSR is more closely integrated with business activities. CSR is meant to ensure that business is done in an ethical, sustainable way and workers are well-treated. Foundations are more about spending and devising their own operational programmes. Sometimes CSR and foundation programmes are synergistic and can dovetail but they can also be in competition.

If too closely aligned in practice, the distinction becomes blurred and any wrongdoing by the corporation immediately has negative results for the foundation. In practice, you can find corporate volunteer programmes organized by a CSR department or the foundation. In both cases, participants seemed to agree that the best way to engage company employees is to utilize their expertise.

Good corporate volunteer programmes identify the corporation’s key skills and use them for the aims of the foundation. One example offered was of pro bono work by an insurance company’s risk analysts for the non-profit or communities the foundations work with as the Z Zurich Foundation from Switzerland does.

Other alternatives to grantmaking can be to run social institutions like, for example, the rehabilitation centre for sick children run by ING for Children Foundation in Poland. Foundations may also make use of one of the many new financial tools that are gaining prominence in philanthropy such as impact investments or social impact bonds. However, at least among the participants, these were not popular yet.

Wrapping up
What did we learn from the two days? First, it became evident that, while very different individually, corporate foundations in Europe share many commonalties.

The overarching theme for all is their relation with the funding company. Corporate foundations will always have to deal with this. The relationship is dynamic and full of risks but also full of opportunities. 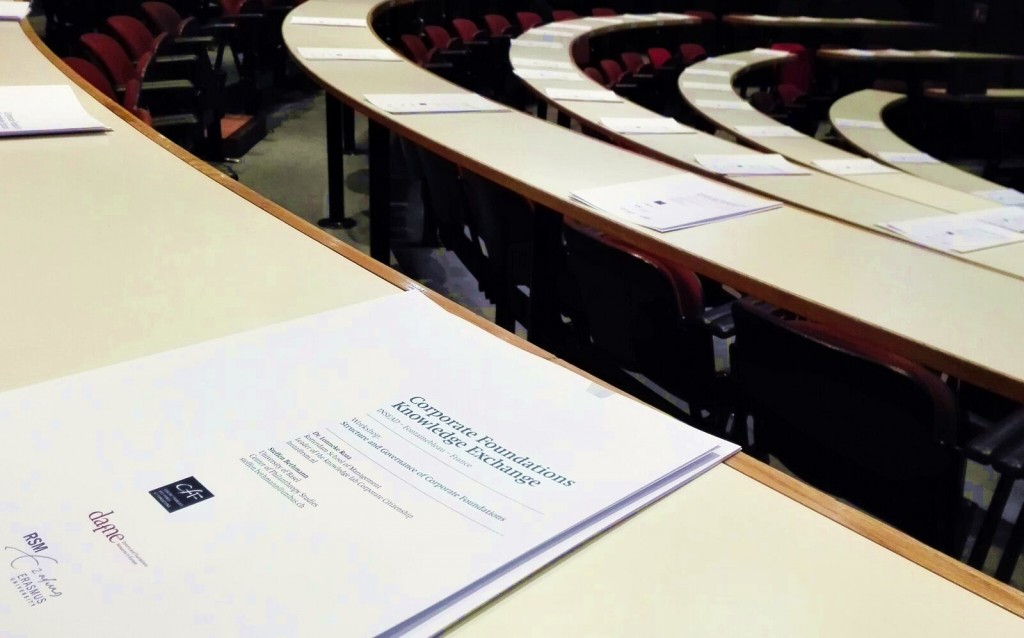 Second it became apparent how much foundations can learn from each other. The conference delivered what its title promised. The organizers found numerous ways to engage the participants and foster the exchange of knowledge among them.

Everybody had a better sense of what is going on in the European foundation world. Even though participants came from more than seven countries, they all spoke the same language. A mutual understanding could be felt. It was not one of those conferences where you are lectured to and sit through one panel after another.

It was a true exchange. This sort of event will move the field forward. Not just for corporate foundations but for the whole philanthropic sector.

Steffen Bethmann and Theresa Gehringer are researchers at the Center for Philanthropy Studies at the University of Basel.