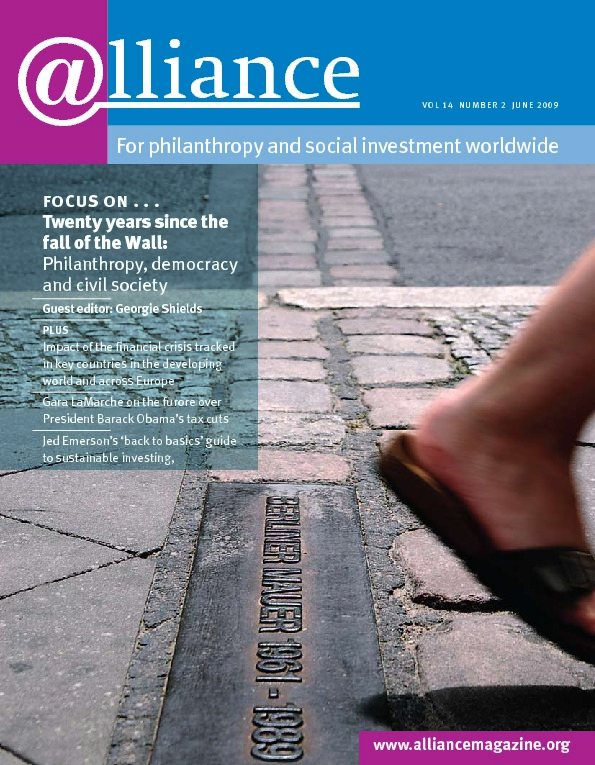 The effect of the financial crisis around the world upon civil society, including its key foundation funders, remains unclear, with limited reports from Asia, Africa and the Americas. While the situation in the US is the most closely tracked, the deepest impacts have yet to come in developing nations as the crisis in the North spills into the South in the form of reduced investment, employment, trade, tourism, remittances and international aid.

Alliance has reports on aspects of the crisis from South Korea, Indonesia, Brazil, South Africa and elsewhere. We welcome contributions on the impact and implications of the crisis for future issues: please send to caroline@alliancemagazine.org

Across Asia and the Pacific, the combination of domestic economic problems reducing individual and business incomes and international funders facing problems is leading to a civil society recession after a decade or more of growth and development in the ‘burgeoning philanthropic powerhouses’ of China and elsewhere in the region. Most foundations have seen their capital shrink by up to 30 per cent, while corporations and wealthy families are expected to become less generous. ‘All the news we are hearing is that people’s wealth is declining,’ said Singapore-based Krista Slade, Asia Pacific executive director of the Council for Advancement and Support of Education, which assists universities and colleges with fundraising.

There are reports of declining giving in the Philippines, Thailand, and Cambodia but the region saw some positive news in early 2009. Wealthy entrepreneur Cao Dewang aims to become one of China’s largest philanthropists by pledging roughly $600 million to a new foundation, while Singapore raised the percentage that donors can deduct from their taxes from 200 per cent to 250 per cent. This is part of the island city-state’s efforts to become a hub for non-profits in South-east Asia, with the number of international charities represented there doubling since 2005 to 70.

At the Asia Foundation, its Tokyo-based vice president for the Partners in Asian Development programme, Allan Choate, said the past ‘explosion in giving’ among wealthy families and businesses in China, Singapore and elsewhere was likely to fall back despite the growing needs, and he was concerned for the future of foreign aid programmes established by the region’s governments.

In South Korea, the economic crisis is having a serious impact on NGOs and civil society, writes Won Soon Park, executive director of Korea’s first community foundation, the Beautiful Foundation. But while major companies in particular have been cutting their cause-related spending hard, the Beautiful Foundation is among a number of charities hoping to see increases in the number and level of individual donations. The crisis comes against a backdrop in Korea of a government that Park calls a ‘catastrophe’ for its hostility to the NGO community, which has led to charities being politicized.

Indonesian politics is also combining with the economic crisis to affect philanthropy and civil society development, adds Natalia Soebagjo, a Jakarta-based policy analyst. This year’s parliamentary and presidential elections have seen Indonesia’s political parties competing with charities for contributions from individuals and businesses at a time when corporate giving is becoming ‘more selective and more limited’, says Soebagjo, so many civil society organizations are suddenly finding themselves short of operational funds or having cashflow problems as pledges made to them earlier by private corporations are not received in time or in the amount originally pledged. Civil society groups face a complex challenge of raising both their efficiency and their creativity to raise more funds domestically while also being less ambitious in programme spending.

South African non-profits have been urged to become more sustainable by rethinking the way they operate as the recession bites. Vincent McGee, a senior adviser to the Atlantic Philanthropies, told a meeting on the future of funding organized by Inyathelo, the South African Institute of Advancement, that resources had decreased substantially as some foundations and donors either reduced their funding disbursements or limited funding periods and worked on exit strategies.

One indication of the crisis is that social welfare groups in South Africa are closing despite calls for state support. The organization Child Welfare South Africa has met with government officials to discuss a possible bail out plan to help struggling NGOs but says closures have begun and services are being curtailed.

Analysts are reaching a range of conclusions about the scale of international funding flows to developing countries. The new 2009 Index of Global Philanthropy and Remittances published by the Hudson Institute’s Center for Global Prosperity and covering the US and 11 other developed countries suggests that philanthropy and remittances will be lifelines to help developing countries weather the economic storm.

Philanthropy from developed to developing countries by foundations, corporations, charities, churches and individuals increased to $49 billion in 2007 and the index predicts there will be no sharp downturn in 2009 despite the loss of assets in 2008. However, Interaction,  the US umbrella group of 175 overseas aid charities, forecasts that its members’ $9 billion-a-year spending will fall by $1 billion in 2009.

The index estimates remittances at $145 billion, up 9 per cent in 2008, and suggests they may be the most recession-resilient means to help alleviate poverty in developing countries, predicting they will decline by less than 10 per cent in 2009. Yet a World Bank report prepared for the March 2009 G20 meeting in London, which estimated remittances at $305 billion, warned that a significant fall in remittance flows in 2009 would be of major concern to highly dependent states in Africa, Eastern Europe, and Central and South Asia.

Source
Swimming Against the Tide: How developing countries are coping with the global crisis, World Bank, March 2009.
World Bank http://tinyurl.com/alliance3

In the US, informal research by Grantmakers without Borders (Gw/oB) suggests foundations have been responding to the economic crisis in a range of ways both enlightened and defensive. Positive responses have included offering emergency lines of credit, including low or zero interest loans, and crisis funding; switching from restricted to unrestricted funding to allow recipients maximum flexibility; contacting client groups early to see if grants might be needed earlier than anticipated; providing frequent and transparent communication with those receiving funds; and increasing the amount being spent. Defensive steps have included suspending all grantmaking to preserve or increase the foundation’s endowment. Gw/oB says further research will be published in future.

Gw/oB has also collated links to organizations offering advice to foundations, including:
Association of Small Foundations http://www.smallfoundations.org
Foundation Center http://foundationcenter.org/focus/economy
Council on Foundations http://www.cofinteract.org/economy
National Center for Family Philanthropy http://www.ncfp.org
The Foundation Center has produced a map with links to information on how non-profits in each state may be able to access stimulus package funding. http://maps.foundationcenter.org/economic_crisis/stimulus

As the economic crisis spreads to affect Brazilian philanthropy, the impact includes declining endowment funds in some foundations, poor business performance affecting corporate foundations, and caution as foundations generally save their resources to guarantee their long-term role.

Somewhat protected by the lack of foreign investment and liabilities, though at risk from falling commodity prices, the Brazilian economy seems to be experiencing slower but stable growth. But the overall level of philanthropy has been affected, with big falls in corporate giving.

Several companies, particularly those in commodity export, paper and cellulose production, mining and steel, have closed their giving programmes. Other firms have reduced their corporate social responsibility programmes, provoking debate about their commitment to social and environmental policies and claims of hypocrisy.

And while there is still a lack of hard data to monitor the crisis, evidence from faith-related organizations suggests job insecurity is affecting individual giving.

Marcos Kisil is President of the Institute for the Development of Social Investment. Email mkisil@idis.org.br