Turkey Giving Circles on the rise

The world’s second largest Foundation, the London based Wellcome Trust, is advancing plans to grow its staffing and operations in Berlin ahead of the UK’s departure from the European Union. While The Trust insists its plans are evolving ‘independently’ of Brexit, political uncertainty about Brexit is spilling over into the UK’s foundation sector and could have significant implications for its future size and scope.

The Wellcome Trust, which works to improve health through medical research, has an endowment of £20 billion and makes grants well in excess of £700 million annually. Widely regarded as one of the UK’s leading scientific institutions, Wellcome announced the opening of a Berlin office on 11 October 2018 just days after the Trust’s Director, Jeremy Farrar used an article in The Observer to warn against the UK leaving the EU without a deal. ‘No deal leaves a void on access to funding, regulation and, critically, migration’. Farrar also noted that Wellcome’s support for UK scientific institutions and researchers was ‘not unconditional’ fuelling speculation about its plans in the European philanthropic sector. One observer describes Wellcome’s new office as an insurance policy and ‘back pocket option’ in the event that the UK suffers a catastrophic Brexit. ‘We have invested in the UK for more than 80 years…but if the conditions and the culture here are damaged, that will affect our support. It is not unconditional,’ warned Farrar last year.

Despite that, the Trust argues that the UK is a great place for science and innovation and wants to continue to invest the majority of its annual spending in the UK ‘as long as the country maintains the scientific excellence that allows us to invest here so confidently’ it noted in a statement to Alliance.

German investment in science, and its pre-eminent role in the EU, clearly make the country an attractive location.

Wellcome’s office in Berlin formally opened in January 2019 just months before the UK was due to depart the EU on 31 March. A Wellcome spokesperson confirmed the charity is currently recruiting a fourth member of staff and commented that the office ‘is already enabling us to grow our network with other foundations, academic institutions and NGOs who share Wellcome’s vision to improve health for everyone.’

But as the Trust’s enthusiasm for Germany grows, its warnings about the impact of Brexit in the UK have also increased. In late July, Eliza Manningham-Buller Chair of the Wellcome Trust wrote directly to the incoming British Prime Minister Boris Johnson to express concern that Britain’s international scientific standing could start to ‘wane’. Manningham-Buller, who ran Britain’s secret security service (MI5) between 2002 and 2007 wrote that ‘damage has already been done’ with the ‘loss of researchers and influence’. In a pointed reference, she also noted that the UK ‘will need to mirror those countries who plan to spend much more than we do, such as Germany’ if it is to remain a science superpower. 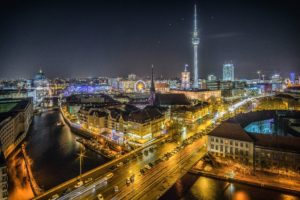 Berlin has become a hub for civil society organisations.

Germany calling…
German investment in science, and its pre-eminent role in the EU, clearly make the country an attractive location. Wellcome’s spokesperson noted that ‘Germany is increasingly playing a leading role in global health as well as being an established actor in science and culture. Under its presidency of the G7 and G20, Germany has driven significant progress on issues such as WHO reform, epidemic preparedness and tackling drug-resistant infections’ making the country ‘a natural place for us to establish an office’.  Berlin itself has added advantages too, according to observers. The city benefits from federal investment in science and a strong health research concentration including Charite, one of the largest research hospitals in the world and a large R&D cluster in the medical and biotech field.

And not just for Wellcome…
Wellcome’s arrival means that three of the world’s largest international foundations have now opened offices in Berlin in the past year. That includes the world’s largest foundation, the Bill and Melinda Gates Foundation, which now has ten staff in Berlin, and the Open Society Foundation (OSF) which plans to have around 100. Both foundations also have long-established offices in London.

Any change at Wellcome, as the UK’s largest foundation by a huge distance, could have significant implications for the British foundation sector and the charities they support.

The presence of Wellcome, Gates and OSF in Berlin underscores Germany’s status at the heart of European philanthropy and OSF in particular – with its un-ashamedly political orientation – could shake up the large but relatively sleepy German foundation sector. OSF arrived in Berlin last year after its exile from Hungary, the country of birth of its founder George Soros. According to OSF’s head of Institutional Relations, Selmin Çalışkan, the Berlin office will become the largest office outside its New York HQ with planned spending in excess of 100 million Euros per year. 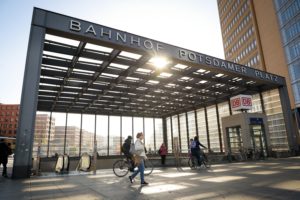 But it is in Brexit Britain that the impact of the 2016 referendum result will be felt most acutely. While most attention on the Wellcome Trust has focused on any potential loss to UK science, any change at Wellcome, as the UK’s largest foundation by a huge distance, could have significant implications for the British foundation sector and the charities they support. ‘Philanthropy…is getting nervous’ wrote Jeremy Farrar in his article last year and some British foundations are preparing for turbulence.

Foundations on a Brexit footing
In the UK, an ad hoc Brexit funders group meets periodically while the Association of Charitable Foundations (ACF), the leading membership body for the sector, is actively providing support and advice, according to Max Rutherford, ACF’s Head of Policy. As part of their preparedness efforts in support of grantees, the umbrella body is calling for ‘a guarantee from government for direct replacement of funding for civil society that is currently received from the EU, and urgent clarity about plans for the Shared Prosperity Fund’. ACF are also joining calls for a contingency fund to help charities to meet any surge in demand. There are also concerns among some foundations that a no-deal Brexit could lead to an economic downturn which could, in turn, reduce asset values and depress giving.

The situation could be most serious in Northern Ireland. The Community Foundation for Northern Ireland, which played an integral role in bringing communities together and reducing conflict during The Troubles, has warned that Brexit uncertainty is affecting the people and communities it works with and that UK’s departure from the EU, especially if it is without a deal, could risk undoing progress.

Its Chief Executive, Andrew McCracken told Alliance that ‘a no-deal exit from the European Union would have bad economic, political and social consequences for Northern Ireland. As a community we have benefited hugely from the EU, not least its investment in peace building, and there is uncertainty about how that will be replaced post-Brexit.’ McCracken added that ‘we also see that the debate about Brexit has heightened traditional community divisions, making it harder for groups who are working to maintain peace between communities.’

One silver lining is that Brexit might belatedly increase dialogue and interaction between British foundations and their EU counterparts. There have already been well-attended meetings in Brussels and the ‘ACF will maintain strong connections with our colleagues and partners in Europe regardless of the outcome of the Brexit negotiations’, notes Rutherford.

As the UK sails into un-charted waters, the stakes are clearly high for its philanthropic sector. But whatever happens with Brexit, and whatever the lure of Berlin for internationally minded foundations, it is looks certain that British philanthropy will need to be on hand in cities and communities across the UK to help pick up the pieces.

Dear Charles, many thanks for this insightful article! The arrival of three of the world's five largest foundations in Berlin will likely trigger a number of developments, including more international collaboration opportunities, a fiercer competition for talent, and perhaps a German version of the current global debate about the role of big philanthropy. Best, Felix (CEO, Association of German Foundations)

The quest for collaboration in Asia