Getting the have-mores to give more

Philanthropy is booming in the 21st Century

The Global Philanthropy Environment Index 2018 – A storm front ahead in Europe?

Why don’t wealthy people in the UK give more? A new collaboration is determined to find out – and to change it.

The Charities Aid Foundation (CAF) reported total giving among the British population at £10.1 billion in 2018. In the US, according to Giving USA 2019, the equivalent number was £337 billion. In other words, a country with a population five times that of the UK gave 33 times more. Why is the level of giving by the wealthy so comparatively low in the UK? It is not that the British are ungenerous. In fact, over the last 10 years, the UK has consistently been among the top 10 countries most generous countries in the world according to CAF’s annual World Giving Index.

The figures highlight the impact that culture has on levels of giving. In the US, where historically the culture not only accepts, but expects, those with money to do their bit, philanthropy has flourished. By contrast, giving in the UK is usually prompted by a sense that we are all part of something, that we are pulling together to a shared goal, bound by a natural sympathy for the underdog – and, critically, it eschews the flashy. If we want to change levels of giving in the UK, we need to harness this culture, value its qualities and adapt them in ways that make it normal to give significantly, especially among the wealthy.

The Collaborative identified five thematic areas that would collectively contribute to cultural change over a ten-year period:

Within each area, five strategic projects were identified as the mechanism for collaborative systemic change.

First findings
In March this year, the first three projects came to fruition.

From these three reports, one message is clear: wealthy individuals who give money to charitable organisations in the UK want to be seen as partners contributing to the achievement of positive social change.

The Giving Experience
Based on a study of 1,300 wealthy individuals – defined as those with liquid financial assets of £500,000 or over – the Giving Experience research shows that 20 per cent of respondents made annual gifts of £15,000 or more and almost all of those with personal assets greater than £10 million gave above this level. The median giving level among the affluent and millionaire respondents was £1,000 – £4,000. If these donations were made to a single organisation, they might register as a major gift. However, the amount is typically split between five or six organisations, meaning these individuals may never register as major donors.

The report concludes that being able to identify wealthy donors is critical for fundraising organisations, but that wealth itself is not the best guide to the kinds of relationships that wealthy donors are seeking.

In partnership with specialist research firm Cultural Dynamics, the study includes a behavioural profiling model based on Maslow’s hierarchy of need. Using this model, the research identifies strong behavioural groupings whose approach to giving is linked to personal drivers. For simplicity, we will refer to these groups as Settlers, Prospectors and Pioneers. 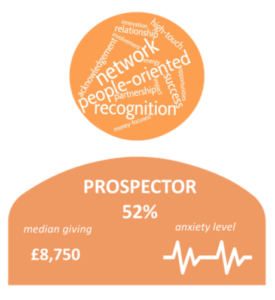 PROSPECTORS
Prospectors are the largest group within the wealthy population accounting for 52 per cent of the total. They have a deep-seated need for recognition, which makes them people-oriented, highly networked and widely engaged with charitable organisations

They also have the highest median annual giving level at £8,750 and are most likely to have given a major gift. Put simply, this is the profile that is most focused on making money, and also the most focused on giving it away.

Prospectors are well-known to charitable organisations, as high-touch, high-maintenance major donors. However, what is perhaps not appreciated by the fundraising community, is the high level of anxiety they have about money. For prospectors, money and status are linked.  They worry they may not be able to achieve their financial goals, that they will not be valued by the organisations they support, and that their family and friends will judge them negatively for their giving. 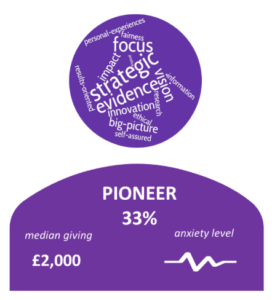 PIONEERS
Pioneers account for 33 per cent of the wealthy population and are more of an enigma to the fundraising community. Using the language of Maslow, they are in the phase of self-actualisation which manifests in a strong internal sense of what is right and wrong, of fairness, justice and equality.

They are likely to be deeply aware of the issues organisations are working on and seek out those that are leading the field. Many have made their money by being ahead of the curve in business and expect the same of the organisations they support.

Interestingly, however, they typically give less – the median annual giving level is £2,000 for this profile – although usually they give in a more focused way. For example, they are more likely to allocate larger amounts to core funding. However, they offer no guarantees, making commitments based on results rather than relationships. They are also not particularly keen on fundraisers because for them evidence is everything.

Pioneers are not particularly anxious about giving money; they are simply waiting to find organisations that convince them with evidence and innovation. 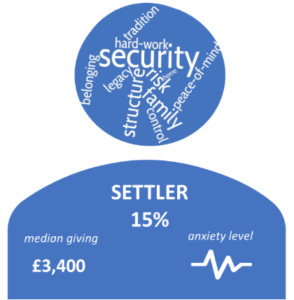 SETTLERS
Only 15 per cent of the wealthy population in the UK fits the Settler profile. This group is security conscious and naturally conservative, tending to favour tradition and structure over innovation and new ways of doing things.

For Settlers, family comes first. It is hard to engage them to make major charitable commitments. Yet, with a median giving level of £3,400 they should not be ignored.

Their preference for structure means they are more likely to consider pledging or writing a legacy into their will than other profiles. They also tend to focus on the governance and sustainability of non-profit organisations when considering making a donation.

The report highlights that current approaches to fundraising tend to prioritise the Prospectors and new approaches are needed to unlock giving among the other 48 per cent of wealthy individuals.

It also shows that the philanthropy sector can play an important role in supporting the wider needs of wealthy donors. In particular, many of the barriers to giving reflect the personal anxieties individuals feel when considering making a significant gift. In part, this need can be served by the wealth advisory community who need to be encouraged to factor giving into financial plans. Individuals need to have the peace of mind that their investments will achieve their financial goals and that some of the proceeds will be available for regular giving as rewarding lifestyle choice.

More broadly, however, there is a need to consider the public discourse on giving in the UK if we want to drive more and better giving. The research highlights that 13 per cent of wealthy people say the judgement of their family and friends is a factor in stopping them from giving money. In other words, the discourse on wealth and charitable giving in the UK can inhibit them from giving and, when they do, it can leave them isolated from best practice.

Based on 31 interviews with philanthropists and sector leaders, the report calls for philanthropy in the UK to be defined not according to how much an individual gives, but the role played by them in galvanising transformational change across communities. The report also calls for more opportunities for philanthropists to work together and for peer-to-peer support; as well as education to build the skills of philanthropists, fundraisers, the advisory community and the philanthropy sector around them.

The report concludes that the focus of our public discourse should not be on the individuals, but on the projects, communities and outcomes they enable, in short, philanthropy itself needs to be recognised and celebrated in the UK, more than philanthropists.

Collaborating for a Cause
The third report in the trio, conducted by New Philanthropy Capital, looks at how philanthropists can be brought together to share knowledge. Cause-related networks are a relatively new concept in the UK, but enable collaboration around a particular cause or theme. By working together, philanthropists can learn from each other, identify funding priorities and gaps and work towards greater coordination of resources. The report provides a framework for establishing such networks as well as cases studies showing how others have mobilised networks of donors aligned to particular funding themes.

In the weeks since completing these reports, the UK’s non-profit sector has faced the critical impact of the Covid-19 pandemic. The National Council for Voluntary Organisations (NCVO) has estimated that there will be a £4.3 billion funding gap for the charitable sector by June. While the scale of the crisis needs a coordinated effort led by government and civil society, there is an important supporting role for philanthropy to mobilise vital new capital where it is needed most.

In response, the Beacon Collaborative partners have been implementing the findings from these reports, raising the visibility of philanthropy and sharing knowledge across the network in an effort to encourage more individuals to fund. What we are learning is that the findings set out in these reports hold true, even under this most extreme test.

The Beacon Collaborative is a collective impact movement bringing together philanthropists, organisations and foundations that share a common aspiration to increase philanthropy and social investment among the wealthy in the UK.