Donors can help accountability of partnerships

Civitates has set up a €3 million fund to support public-interest journalism in Europe.

Collaborative fund Civitates is to make multi-year commitments for core support to organisations producing independent public-interest journalism. The grants will provide general operating support and institutional strengthening and also encourage grantees to work together and learn from each other through network building. 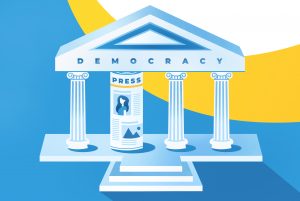 As a pooled fund founded in 2017 to promote democracy and solidarity in Europe, Civitates is already supporting initiatives that strengthen the space for civil society and that push for a healthy digital public sphere in which public and democratic values are safeguarded. At the start of this year, the 18 participating foundations agreed that the Civitates consortium would be an apt vehicle to support the struggling journalism sector in Europe[1].

The last few years have seen the rise of many non-profit, public-interest journalism outlets. Think, for instance, of centres like The Bureau of Investigative Journalism in the UK, Correct!v in Germany, Direkt36 in Hungary and the Investigative Reporting Project Italy. Organisations like these have proven to be invaluable for researching important societal issues, exposing abuses of power and defending a space in which all voices are heard. However, they are generally in a vulnerable position, particularly when operating in politically hostile environments. What is more, as not-for-profit outlets, they fall outside the scope of the funding mechanisms that cover for-profit journalism organisations. So philanthropy has a valuable contribution to make here and it is encouraging to see more foundations supporting the vital role that independent and reliable journalism plays in democracies, serving as a platform for debate, and reporting on governmental and corporate (in)actions.