A dramatic change in Ukraine’s culture of giving: the impact of Russia’s invasion

The culture of giving in Ukraine – the focus of Zagoriy Foundation – has changed dramatically since Russia’s full-scale invasion. The change in the amount, quality and speed of help was evident to the whole sector even before we were able to measure it. 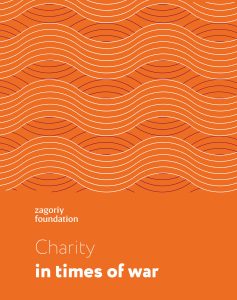 Now, our team is very much set on promoting a systematic approach to giving. Since 2019, we’ve been researching charitable giving in Ukraine, always noting positive growth, although a slow one. Of course, we couldn’t wait to see the results of the most recent study ‘Charity in times of war’ that the Zagoriy Foundation conducted with the Ukrainian Center for Public Opinion Research Sotsioinform. Our team is excited to use it as an evidence base for further analysis and planning.

Here are some highlights and insights from the study:

Giving in the spotlight

Charity has taken a much more visible and apparent place in society. Rising numbers of initiatives and their accessibility, higher relatability, as well as other factors led to Ukrainians for the first time rating the prevalence of charity as ‘high’. In 2021, it was estimated at 4.5 points, compared to 7.8 points in 2022.

Gender representation in charitable activities has levelled off: men are now as involved in charity as women. We assume that the feeling of personal responsibility for future victory makes the men participate more actively. It is also possible that currently there are more volunteer opportunities that could be considered ‘masculine’, like finding and delivering gear to the frontlines, restoring houses, etc. that make men in our fairly patriarchal society feel more comfortable doing charity work.

Participation in charity is correlated with income and education: the higher its level, the more actively people participate in charity. Of these two factors, education influences the level of giving the most. It could be argued that the more educated people are – the more they understand the value of giving not only to your immediate community but to different initiatives on a more global level since there is a huge number of factors playing into keeping society stable.

On average, the amount of financial assistance during the 4 months of the war amounted to 5,870 hryvnas (nearly $160) per adult resident of Ukraine. It might not seem like a lot, however, these numbers really fall into perspective considering that the minimum wage in Ukraine is 6,500 hryvnas ($170) a month.

At the same time, the intensity of donations decreases over time. Half of the donations took place in February-March (essentially the first 40 days of the war), and the other half over the next three months. This dynamic just further proves that giving is extremely connected to emotion, and even though that is rather useful in times of extreme need, once emotions calm down – so do donations. Does the settling of emotions mean the issue got resolved? Unfortunately, no. So here is one more reminder of the need for systematic approach help, that becomes natural and routine regardless of the times.

Ukrainian society has changed its attitude towards charitable foundations. The level of trust in nonprofits changed from mediocre (2.66 points out of 5) in 2021 to rather high (3.77) in 2022. In practice, residents of Ukraine are more likely to support a volunteer organization/association than a foundation (73 per cent, against 46 per cent). It could be said that foundations seem to be a safer place to donate than a newly established volunteer organization, however, 70 per cent of Ukrainians who helped charitable organizations did not check their integrity.

Not to much surprise, 86 per cent of benefactors and volunteers helped the army, 67 per cent – other beneficiaries. Most often, residents of Ukraine transferred funds to the state account of the Armed Forces of Ukraine and to the personal accounts of those who needed financial support.

A third of Ukrainian men and women volunteered since the beginning of the war (or 39 per cent of the number of benefactors). Truly unprecedented. There are a couple of positive outcomes to such exposure to volunteering. The more obvious one – people, who haven’t volunteered before get to experience how rewarding volunteering can be and might continue volunteering in the future. The less obvious, and possibly more important result – people get to experience how hard charity work is, physically and emotionally. Getting more citizens to understand the amount of funds and resources it takes to complete volunteer projects, helps the third sector build a strong network of committed donors and supporters out of those who tried volunteering. Not to mention, this kind of change helps grow the population’s respect towards the charity sector.

Of course, as in any unprecedented intensification of civil society processes, not all outcomes are positive. For instance, organizations that work with ‘less relevant’ for wartime issues have voiced their concerns about the decrease in governmental support as well as in private donations. Such topics include the support of seriously ill, HIV patients, and gender issues.

It is also much harder to keep track of donations and spending in times when the need for help is so urgent, and it is important for newly founded organizations to take time to reevaluate their systems once there is an opportunity to do so. It is no less important for donors to take the time to check the organization they donate to, regardless of how overcome with emotion they are at the moment.

Another big point of improvement is the communication between international and local charities – there seem to be many gaps that, once filled, would make for much more efficient work. I urge international organizations to not disregard the importance of keeping in constant contact with small local volunteer groups that have extensive and updated knowledge of each community’s needs.

Without a doubt, most change is positive. By our estimation, the culture of giving grew in a way it was supposed to in 5 to 7 years of constant work of the third sector. It is not to say that it’s time for a break, but it is to say that we have done well. So I would like to take the opportunity to give some praise to our sector!

Now let us regroup, and make this positive change effective in the long term.

Read the full version of ‘Charity in Times of War‘.

Eugenia Mazurenko is the CEO of the Zagoriy Foundation in Ukraine.