A Splendid Torch: ten environmental donors talk about their giving

The Environmental Funders Network this week launched a new publication: A Splendid Torch: Interviews with Environmental Funders. Ten influential donors with decades of combined experience in environmental philanthropy share what motivates them to give, what strategies they have adopted for their grantmaking and how they ensure that their donations are as effective as possible.

While their approaches to giving show some marked differences, a number of key themes emerged across the ten interviews, including: 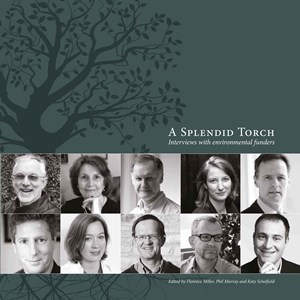 1) Be bold, and accept you may have failures. As Jamie Arbib of the Tellus Mater Foundation put it: “I’m coming from a venture capital background and that’s what we do. You make a number of investments, and some of them fail, that’s the nature of things. I’m relatively comfortable with risk and what we want to do is to encourage these more game-changing ideas… As a foundation we don’t feel the need to justify ourselves so much, and I think that liberates us.”

2) Fund for the long term. As Kristian Parker of the Oak Founndation said: “Change just doesn’t happen fast. You have to make long-term commitments to any enterprise.” Ben Goldsmith of the JMG Foundation stressed the importance of persistence and focus: “You need to get to know the groups that you’re supporting and stick with those groups through thick and thin and maintain focus, not flip from one thing to the next and be reactive.”

4) Give, give, give. As Sarah Butler-Sloss put it: “The biggest challenge for environmental philanthropy is that there are so few environmental funders.” Research published by the Environmental Funders Network confirms this view; only about four percent of charitable giving in the UK goes to environmental causes—giving is not yet anywhere near the scale that it needs to be to tackle the big challenges we’re facing.