How foundations can address poverty in the UK

Looking at the history of UK charitable foundations, it is not difficult to establish that a significant proportion of them have a longstanding tradition of working to relieve poverty across Britain.

However, in the current socio-political context, where Brexit is contributing to economic uncertainty and ongoing welfare reform is affecting some of the most vulnerable people in our society, many foundations are questioning the nature and extent of their contribution.

For some foundations, the concept of additionality, whereby foundations have traditionally seen their role as the ‘icing’ to the statutory funding ‘cake’, is no longer proving to be a realistic option.

As a result of reduced state provision, foundations are under considerable pressure to fill statutory gaps which, due to their limited resources or strategic priorities, they may not be able or willing to do. So, in the face of present and future challenges, what can foundations realistically do to help address poverty in the UK? 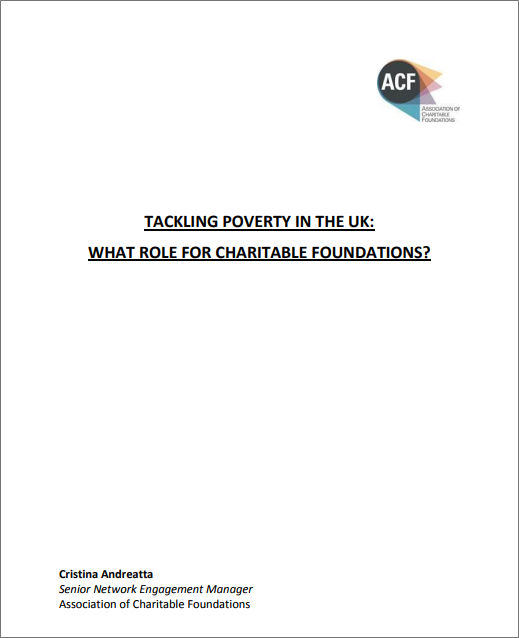 As part of a project funded by the Joseph Rowntree Foundation, the UK’s Association of Charitable Foundations (ACF) has recently completed a brief scoping exercise looking at the role foundations can play, with their finite but independent resources, to more effectively tackle UK poverty and its causes.

In this context, the merits and challenges of adopting collaborative and systemic approaches were also explored with a view to providing some indications of how future work in this area could be developed.

The research involved in-depth interviews and a group discussion with a sample of 21 foundations representing the diversity of the sector as well as a focus group session with people with lived experience of poverty and the organisations supporting them.

The research found that when it comes to mitigating the effects of poverty, this group of foundations collectively support a wide portfolio of interventions, ranging from crisis interventions to more tailored and strategic interventions. The diversity of grant-making approaches was generally welcomed by respondents as being very beneficial for the sector.

But many interviewees pointed out that one of the risks associated with grant-making in this area is the question of whether foundations may be failing to maximise their impact, with grant-making interventions useful in alleviating symptoms of poverty in the short-term but perhaps not conducive to achieving lasting change.

While tackling the root causes of poverty was in fact seen by most research participants as being beyond what foundations can realistically achieve, many thought that there might be scope for foundations to use their independence, power and privilege to a greater extent to influence change.

They could, for example, play a convening role by bringing together different stakeholders that can help find concrete solutions. They could draw attention to structural issues that fundraising charities find difficult to address and identify opportunities for political leverage.

The could also give voice to communities, use the evidence from their grant-making to make a case for what works and what does not work, and crucially leverage more money from the public and private sector to support larger scale change.

There was also some agreement among respondents that the time might be right for foundations to explore more coordinated approaches to tackling poverty.

This was perceived to be particularly valuable if used as an opportunity to explore ways of working together that learn from and build on existing frameworks, and draw in a wide range of foundations beyond the usual suspects.

Crucially, this research has shown that, when it comes to tackling UK poverty, the diversity of the grant-making sector and the complexity of the problem at hand mean that it is neither realistic nor useful to identify a ‘one size fits all’ anti-poverty strategy to which each funder can contribute in a homogenous way.

However, there might be scope for UK foundations to establish a shared vision for what they can collectively do as a group to better respond to the complexities of poverty in a changing socio-political landscape, with umbrella bodies like ACF potentially playing a facilitating role.

There might also be a chance within this process to identify discrete issues that are already on burning platforms and, as such, might have enough traction to galvanise the energy of the sector, with perhaps a small number of foundations willing to champion and drive forward potential collaborative efforts in those areas.

Such a collective endeavour, that acknowledges and builds on the diversity of the sector, might also offer an incentive for foundations to reflect on their behaviours and funding practice as an important step towards making their future contributions in the anti-poverty space more effective.

Cristina Andreatta is the Senior Network Engagement Manager for the UK’s Association of Charitable Foundations (ACF).

This article originally appeared on the ACF website on 30 November 2017. The original article can be found here.