At PEXforum 2022, democracy is on the agenda

Democracy funding is a tiny fraction of philanthropic giving – how can the sector use what resources are allocated in the most efficient way? A small group discussion at PEXforum 2022 dives into this question.

In the midst of the crises of recent years, our social architecture has proven to be extremely vulnerable – and PEXforum 2022 was an open venue for attendees to share their personal and professional experiences how.

Representatives from Ukraine’s Zagoriy Foundation testified to the precarious nature of peace and democracy after arriving in Istanbul via a long and winding journey, a trip that would have been just a quick flight merely six months prior. And from Turkey’s foundation and nonprofit sector, several at the two-day gathering shared their own experiences working in a shrinking space for civil society and growing polarisation.

What is the role of philanthropy when it comes to facing threats of social cohesion? A small group discussion, moderated by Alliance4Europe’s Maia Mazurkiewicz and sharing the insights of iac Berlin’s Vinzenz Himminghofen sought to explore this idea. A few reflections from participants stood out. 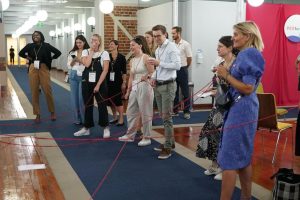 Attacks on LGBTQI communities and reproductive rights are often the ‘canary in the coal mine’, when it comes to a weakening democracy, one participant shared. Colleagues from Poland, where abortion access has been challenging for most of modern history and where same-sex couples are not legally recognised, spoke to their American counterparts about where their near-term future could be headed amid the repeal of Roe and increasing attacks on trans and LGBQ rights. In both countries, there’s no trust in democracy by the youth, one participant shared. In Poland, this lack of trust has made it hard to leverage any sort of change through funding institutions.

What can work? Participants discussed the benefits of funding civic education and journalism. The media can leverage change by making ‘the other’ familiar so it is not as scary – one attendee shared how Netflix is centring minoritized groups in some of its content, which is putting points of view in front of people that wouldn’t have otherwise been exposed.

Participants also explored how NGOs can work on democracy issues in places like the UK and US, where registered charities can’t be political. One participant shared how a philanthropist in her network allocates their democracy funding, not through their registered foundation, but instead through a private donation, to work within legal giving laws.

In this work, there’s always the looming threat of ‘bad philanthropy’ – in this case, the small group focused specifically on the amount of money being channelled into anti-LGBTQI groups and legal fights for abortion bans. According to a report from the Global Philanthropy Project, just one organisation, the Christian Broadcast Network, reported expenses of over $622 million in the period surveyed – contrasted with $576 million, the sum the entire global LGBTQI movement received during the same time.

But when it comes to influencing the strength of global democracy, it’s certain that whatever the sector is doing, it’s acting too slow, said one participant.

For attendees of 2022’s PEXforum, hopefully, they were inspired to act.

Read all of Alliance magazine’s coverage of PEXforum 2022.