Beyond impact: the international Philanthropy.Insight project

Some years ago, I attended an international conference of CSOs, held at OECD in Paris. Joining a table with CEOs of large international NGOs, it so happened they were discussing some effects of concentrating on impact in evaluating what they were doing. They all agreed this was going down the wrong path, blurring the difference between for-profit and nonprofit: if market standards were to prevail everywhere, why not leave everything to the market? They feared this would eventually lead to the question why nonprofits should exist at all and enjoy tax and other privileges. 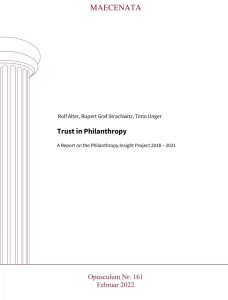 Not long afterwards, a former OECD director, Rolf Alter, now a member of the UN Committee of Experts on Public Administration (CEPA), approached me with the same question and interestingly different reasoning. His starting point was the loss of trust in institutions, by which the core of a liberal and open society would suffer severe damage. For civil society and philanthropy, trust was the licence to operate, and this he argued, could only be gained by developing a more comprehensive way to judge what CSOs were doing. A very first survey confirmed that this was anything but clear to most of them. Large foundations in particular, while believing to be extraordinarily popular, are often anything but that. Their focus on impact lets them be perceived as driven by self-interest. Their unprofessional while condescending boards follow popular whims that give them an illusion of being successful. In short, they are not trusted. Of course, there are exceptions to this rule, but the majority is overwhelming.

These findings led the Maecenata Foundation, a think tank, to develop a project called Philanthropy.Insight. Concentrating on private foundations, and assisted by Timo Unger, a young researcher from the Hertie School of Governance, Rolf and I asked ourselves how we could nudge them to adopt a more comprehensive assessment of their doings with the aim of regaining trust and setting themselves apart from business as well as government. What we came up with was what is called a category model. With the help of a number of international experts, both from academia and the field, we defined five categories, through which a fair assessment could be attempted:

These categories were broken down into 3 sub-categories each, and 3 questions per sub-category: 45 questions in all. The answers would be drawn together in a pentagon.

We were not aiming at spying on foundations. The purpose of the exercise was not to rank, let alone brand or denounce them. What we expected foundations to do is develop their very own pentagon and see for themselves where there might be room for improvement. Our toolkit was to be applied by them, their boards, managers, and staff, or anybody they might wish to appoint to the job. We know that a few foundations have been experimenting with the tool, appointing internal and external teams or hiring consultants to see them through it. We have not been told how they fared, so we may presume it has given them food for thought.

Still, the foundation community didn’t like the project. It seems many foundations were not keen on taking a closer look at their reasoning. While two large international foundations, Carnegie UK Trust and Gulbenkian Foundation were very supportive, most foundations we approached were not. Nevertheless, from 2019 to 2021, we were invited to talk about the project, in Addis Abeba, Beijing, Berlin, Madrid, Moscow, Paris, and New York. Articles were published in the United Kingdom, the United States, and Germany, and soon will be in Brazil; the Maecenata Foundation published preliminary reports in English, Chinese, French, and German, and finally a full report in English that includes a manual for applying the tool. The project also became part of the European foundation community’s PEX programme.

Not surprisingly, we were by no means the only ones to say that impact was not enough. The conviction that CSOs in general, and foundations in particular, have a different role to play in society than providing state of the art grants, assistance, or services, is widespread. As we rapidly move into a full-scale worldwide battle between liberal democratic and open societies on one hand and autocratic closed ones on the other, and seeing the civic space shrinking rather than expanding, it is clear we need to gear up our potentials; soft power is of essence. Trusted, independent, and open-minded CSOs are crucial, not as pseudo-corporates or pseudo-government, but as attractive and responsible communities of choice with an agenda and a reasoning of their own. If for no other reason, it is to join the fight for freedom that foundations need to go beyond impact.

Dr Rupert Graf Strachwitz is the CEO of the Maecenata Foundation.