Bill Gates Sr., a lawyer and the father of the Microsoft co-founder and philanthropist, passed away earlier this week. Gates Sr. helped his son Bill  and daughter-in-law Melinda start their philanthropy work in the ‘90s – support that made the Bill & Melinda Gates Foundation what it is today, Gates Jr. has said. 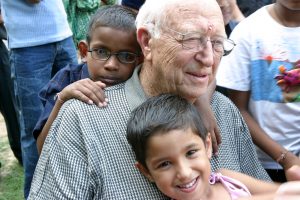 ‘More than anyone else, he shaped the values of the foundation,’ Gates Jr. wrote about his father in a blog post earlier this week. ‘He was collaborative, judicious, and serious about learning.’

For many years, Microsoft demanded the attention of Gates Jr., and Gates Sr. stepped in to manage the day-to-day philanthropy work – first at the William H. Gates Foundation, then later at the Bill and Melinda Gates Foundation when the family foundations were combined. Gates Sr. oversaw projects to funnel support for eradicating polio, reducing infant and maternal mortality, building schools, supporting agriculture development in Africa, and supporting research for an AIDS cure.

‘An enormous part of his contribution was not only the strategic focus and the institutional structure of the foundation, but he helped establish the principles we worked by,’ said Patty Stonesifer, Foundation CEO between 1997 and 2008, to the New York Times. ‘He was a daily reminder that just because you have the checkbook doesn’t mean you have the knowledge or the experience on the issues we are trying to address; that we need to listen to the people who have the experience and the knowledge.’

Gates Sr. is survived by his wife Mimi Gardner, his two daughters Kristianne Blake and Elizabeth MacPhee, and eight grandchildren.