CSWAfrica: There is no climate solution without Global South women

Women land, environmental, and Indigenous defenders are on the frontline in tackling the climate crisis and calling out the failure of governments to take adequate action – but they face repression aimed at silencing them.

The inclusion of their voices and stories are fundamental in attaining gender equality and tackling the climate crisis. This is being recognised by the United Nations Commission for the Status of Women (CSW) this year, which for the first time in 66 years focuses on the theme of achieving gender equality and the empowerment of all women and girls in the context of climate change and environmental and disaster risk reduction policies and programmes.

This year’s theme recognises that women and girls are often a casualty in crises – whether the crisis is war, a global pandemic, or a political crisis. The climate crisis increases the risks of gender-based violence, poor maternal and neonatal health and the disproportionate burden of unpaid care and domestic work for women.

Additionally, the impact of the climate crisis is more severe for women in the global south, including Black, Indigenous, migrant and older women, LGBTQI+ people, women and girls living with disabilities, and women and girls living in rural communities. It is crucial that their voices and stories of advocating for climate justice are centred in processes such as those of the CSW. 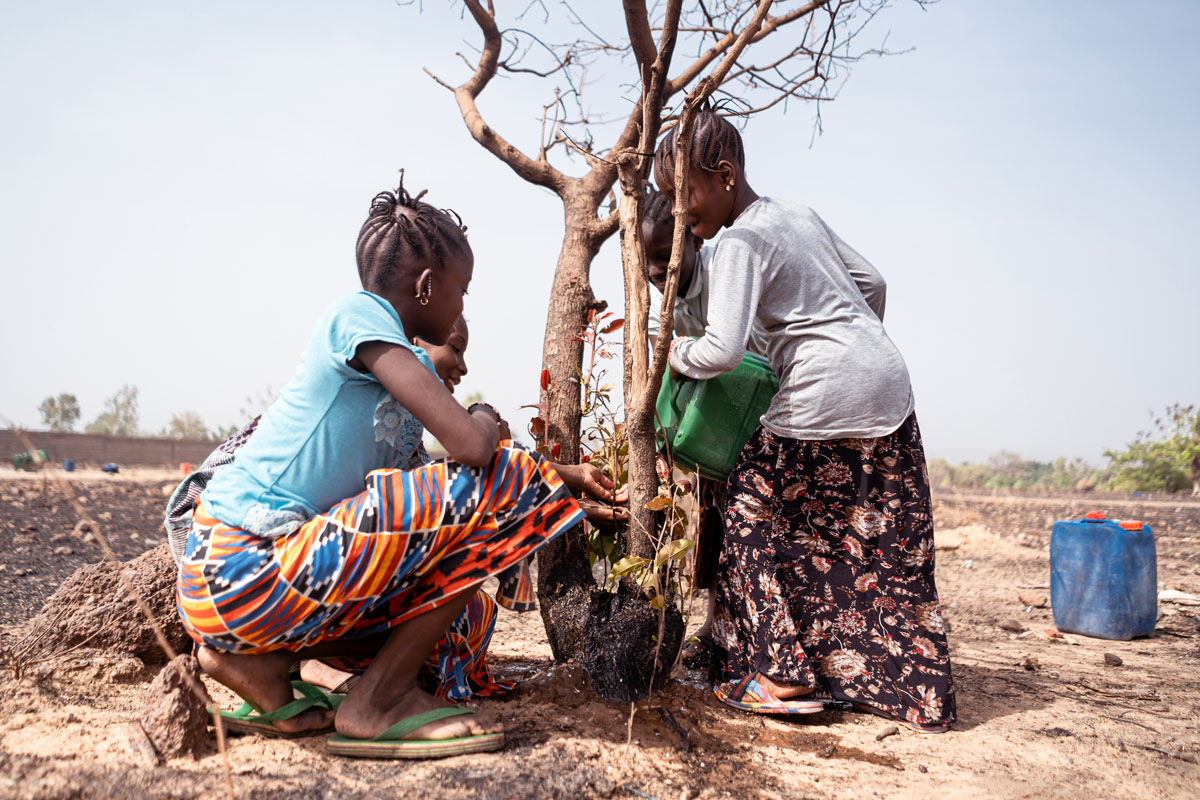 Young girls in West Africa water a tree that is suffering due to drought. Photo credit: Shutterstock

Women at the climate vanguard

There are many examples that demonstrate leadership and resilience. In Peru, Awajún Indigenous defender Augostina Mayán is fighting back against illegal mining in Indigenous territories of the Peruvian Amazon. In January last year she led the eviction of illegal miners from the Nuevo Kanam community, cutting the ropes that held dredgers – devices used to extract gold in the mining process – in place. This action sparked threats against Augostina and her family. However, she says that she will not abandon the struggle of her community.

Txai Surui, a young Indigenous defender from Brazil, is among six young climate activists who are taking the Brazilian government to court for changing its carbon emission commitments and violating the Paris Agreement on climate change. In a media interview she recently emphasised the crucial role of women Indigenous defenders: ‘If you look at who the great representatives of Indigenous peoples are today, you will see that they are women. I always say that the healing of this Earth passes through the hands of women.’

In Lebanon, following the Beirut explosion in August 2020, women were the most impacted on by the devastation but have also been at the forefront of responding to the crisis, which caused environmental harm. In Iraq, Lodya Remon Albarty is working to raise awareness of environmental issues in Basrah city and water pollution in the Euphrates river and Arabian Gulf.

Hidme Markam, an Adivasi woman human rights defender in India, advocates for Indigenous rights and campaigns about the impact of mining in the State of Chhattisgarh. She has been fighting back against mining by large corporations which is threatening a sacred Adivasi hill, an area symbolic for the community, and against mining’s negative consequences for the area. In Vietnam, Khanh Nguy Thi has campaigned for her country to adopt a greener approach by shifting away from coal towards renewable energy, after she witnessed first-hand how pollution from coal power negatively impacted on the health of many people in her community.

In South Africa, women from the communities of Fuleni and Somkhele are pushing back against coalmining and water scarcity, and defending their land, despite living in patriarchal communities that try to silence their voices and that benefit from their unpaid care and domestic labour. Similarly, women in the Democratic Republic of the Congo, Nigeria, Uganda and other parts of the continent are leading the fight against the extractive industries.

These examples demonstrate how women in the global south are pushing back. Yet their voices and their stories are often sidelined or rendered invisible.

This is why African feminists are staging the first CSWAfrica forum, a parallel event to challenge CSW66 in New York, which is currently taking place in a hybrid format, due to the pandemic, that limits participation. Using the hashtag #AfricaDisruptsCSW66, they are calling out CSW, like many other decision-making forums, for being exclusionary and failing to include African women’s voices. They are asking: ‘when is it our turn to speak?’ and ‘where is the table for our voice?’ as too often the voices of those based in the global north are heard the loudest in these discussions.

These demands point to the need to centre the voices of Black, Indigenous, rural and migrant women, and others who live in the intersections, in national and international decision-making and policy-making forums.

In striving for gender equality in the context of climate change, we must ensure that we do not end up fighting on behalf of some at the expense of erasing the experiences of others.

Instead of overlooking the resilience and agency of global south women who are at the forefront of tackling this fight, we must ensure that we amplify their voices and that these inform policy and practice.

Aarti Narsee is a South African feminist, writer and journalist who documents human rights violations across the world in her role as civic space researcher for the CIVICUS Monitor, an initiative of global civil society alliance CIVICUS.