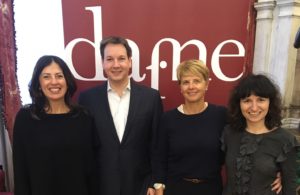 ‘The DAFNE Board is responsible for making policy and activity proposals to the membership, setting the agenda for the ongoing year and overseeing the implementation of a work programme, overseeing and monitoring the DAFNE budget as well as supervising the Executive Director.’

Felix Oldenburg, re-elected DAFNE Chair and Director General of the Association of German Foundations, notes, ‘European philanthropy has a long history of giving and a great diversity of national traditions, cultures and legal norms. DAFNE represents this diversity, as it unites today 27 national associations of donors and foundations with their collective membership of more than 10,000 donors and foundations. European foundations contribute billions of euros each year to social, cultural and educational causes. The potential of institutional philanthropy is even greater. We call for a European Single Market for Philanthropy to unlock this potential and to facilitate cross-border collaboration in Europe.’

Vice-Chair Magdalena Pękacka has served as the Executive Director of Polish Donors Forum since 2006, Treasurer Beate Eckhardt as the Managing Director of SwissFoundations since 2005, and Board Member Carola Carazzone as Secretary General of Assifero, the Italian national membership association of grant-making foundations, since 2014.

For more information about the recently elected DAFNE Board of Directors, visit: https://dafne-online.eu/.