Don Mohanlal appointed as next President and CEO of Synergos

Don Mohanlal, will join the organization as President and CEO on 1 December 2015.

The appointment of Mohan, as he is known, by Synergos’ board follows the retirement of Bob Dunn, who has played this role for the past ten years and for whose tenure and accomplishments the board expresses profound appreciation and gratitude.

Mohan says, ‘I’ve long admired Synergos and its unique approach to locally-created solutions to overcome poverty and look forward to helping it expand and deepen its impact.’ 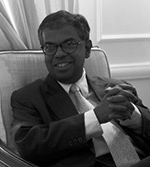 Don Mohanlal was born in Sri Lanka, first coming to the United States at the age of seventeen on a scholarship from AFS Intercultural Programs, an organization to which he returned later to work for 15 years, including as Executive Vice President for Programs and Operations. He currently serves on the organization’s board.

Mohan then served for 16 years as the COO and Executive Vice President of the International Youth Foundation. Following this period of service, Mohan ran the Nand & Jeet Khemka Foundation and the Nabha Foundation, both in India, for seven years. He remains Vice Chair of the Khemka Foundation; in this capacity he also serves on the World Bank Advisory Council of Global Foundation Leaders. He joins Synergos after a stint as Executive Director for Innovation and Impact at the National 4-H Council in the United States.