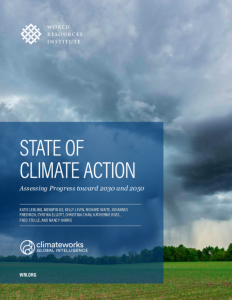 In order to meet limit global warming to 1.5 degrees Celsius – the number agreed as part of the 2015 Paris Agreement – countries will need drop their emissions by half by 2030 and reach net-zero by 2050. A new report from ClimateWorks and World Resources sought to understand whether the world was on track to meet these looming targets and discovered progress is happening too slowly – and in some cases, going in entirely the wrong direction.

The State of Climate Action, released at the close of the Race-to-Zero Climate Dialogues and shortly ahead of the fifth anniversary of the Paris Agreement’s adoption, assessed global and country-level progress across six key sectors toward keeping global warming in check. It found that while progress is being made across many sectors, for a large majority of them the rate of change is much too slow for the world to cut greenhouse gas emissions in half by 2030 and reach net zero emissions by mid-century, which is necessary to achieve the goals of the Paris Agreement.

We need to dramatically step up action across all economic sectors globally, if we want a stable climate future… time is running short.

The report analysed various indicators across six key sectors: the power sector, the building sector, the industry sector, the transport sector, forests and deforestation, and agriculture. In most of these areas, there was insufficient; however, deforestation and emissions from agricultural production had regressed since 2015.

There were two examples of sufficient progress among the 21 areas examined: if sustained at their current rate, crop yields and consumption of ruminant meat would meet 2030 and 2050 targets.

‘We need to dramatically step up action across all economic sectors globally, if we want a stable climate future,’ said Surabi Menon, Vice President of Global Intelligence at ClimateWorks Foundation. ‘Even though we’re making gradual progress, time is running short.’

Though the problem is daunting, it’s still achievable, noted the report. However, the rapid transformation needed will require significant financial investments. Estimates indicate that $1.6 trillion and $3.8 trillion per year from now until 2050 will be needed for the transformation of the energy sector alone. Climate funding has increased significantly in recent years, yet recent data suggests it’s still less than two per cent.

In this area, philanthropy can help to ‘accelerate our progress toward a healthy planet with a prosperous future,’ Menon said.

The State of Climate Action is available to read and download here.