Funding for climate change mitigation in Europe amounts to less than two per cent of total philanthropic funding on the continent – and within that sum, just 3.5 per cent is directed in grants to Eastern Europe with the other 96.5 per cent allocated to Western Europe. 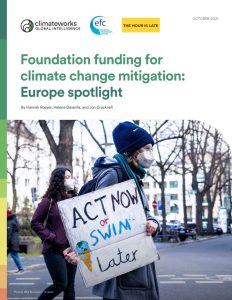 ‘This is particularly alarming given that Europe plays an important role as a global laboratory for climate policy and technology innovation,’ notes the report from which these figures are drawn. ‘It is hard to avoid the feeling that the European foundation sector is missing in action when it comes to the climate emergency.’

These findings come from the most comprehensive report ever published on climate funding in Europe. The research, compiled by the ClimateWorks Foundation, the European Foundation Centre, and The Hour is Late, draws on over 6,000 grants worth €1.8 billion from 136 foundations across Europe to show clear funding trends and provide a comprehensive view of the continent’s key role in the climate philanthropy ecosystem.

When looking at climate funding, look at everything

The report also notes that looking at the total figure of climate funding can be deceptive. For example, the €1.8 billion in grant funding across 2016, 2018, and 2020 analysed by the research ‘may seem like an impressively large figure’. However, it should be understood relative to the enormous sums being spent by those trying to slow down the decarbonisation of the economy, and the levels of investment needed to effectively mitigate climate change.

For example, in the three years following the passage of the Paris Agreement, five large oil companies alone invested more than €900 million in lobbying and misleading branding. Meanwhile, more than 80 per cent of government stimulus spending in 2020, roughly €760 billion, went to carbon-intensive sectors and companies, finds the report.

Why is the foundation sector moving slowly?

The sluggish pace of embracing climate change mitigation funding is not just reflected in the sums allocated to the issue – according to the EFC, just 19 of its 245 members are signed up to any climate commitment. This is despite climate being ‘one of the key topics that do keep our members awake at night’, said EFC CEO Delphine Moralis in an interview with Alliance last week.

Climate change is a complex issue and can feel intractable for new funders, said report co-author Jon Cracknell to Alliance last month in a story about the rise of green intermediary funding bodies. He also noted that there is a general assumption that governments will lead the way, and climate funding can be politically challenging, especially with certain strong institutions trying to slow down the action.

But, Cracknell said: ‘It is really alarming how the failure to address climate change is likely to undermine many objectives which foundations care about… There is strong public support for action, and yet philanthropy is a sector that seems to not really be picking up the challenge.’

The research does highlight some positives – namely that philanthropic support for climate change mitigation has increased by 250 per cent since 2016. In 2016, a year after COP15 in Paris, foundation funding for climate change in Europe was around €100 million. In 2020, that figure was €350 million, and more than a quarter of it was new in that year.

According to the report, foundations are moving more money toward climate change mitigation than ever before, and ‘the landscape of philanthropic giving is complex and growing.’

Speaking about the report’s release, Moralis said in a statement: ‘Philanthropy, as a convener, as a bridgebuilder, as an investor and as a funder has a critical and catalytic role to play in this existential and urgent crisis. In fact, I believe that every foundation – no matter what their focus or subject area is – should consider to contribute, and in its own way and true to its own mission, should consider themself to ‘also’ be a climate foundation.’