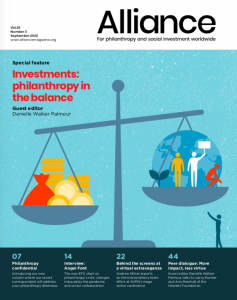 It inspired me to think about popular beliefs with respect to endowment management and the use of investment strategies in philanthropic spending. Both could be challenged and deserve it to be challenged. In my work with foundations I see conventional wisdoms and also new trends that should not be taken for granted but require some reflection and possibly even demystification. Let me mention three different issues, foundations should address in relation to their endowment management and the use of investment tools on the spending side.

The first issue is the orthodoxy of perpetuity. We live in a low-interest environment and we experience a high volatility on stock markets and lower expected returns with respect to most asset classes in comparison with the past. The consequence for most foundations – at least in Europe but I believe more globally, with the exception of the US – is a pressure Boards/Trustees feel to lower the annual spending for their philanthropic mission. In the US this is different, because American foundations are faced with an obligatory payout of five per cent. If they do not meet this requirement, they may lose their tax-exempt status.

The pressure to decrease the spending rate by foundations in Europe is triggered by their wish to be there in perpetuity.

It is nearly always taken for granted that endowed foundations in a distant future should have access to the same purchasing power in real term as today. In this way they will always be able to maintain the same level of spending adapted for inflation. The irony is, that exactly at the moment that foundations would decide to lower their spending rate, the needs for their funding in society are high. Spending rates are under pressure during economic and social crises (or a health crisis as today), but these are also the moments, that society is in need of our resources.

Should we do away with the orthodoxy of perpetuity and opt for a strategy of spending down the main capital? I have worked with foundations that indeed decided to give up on perpetuity and switched to a model of using both the revenues of the capital and using part of the capital as well. I have also worked with foundations, that did not take this explicit decision to give up on perpetuity but maintained or even increased their spending level, when financial markets were in distress. By doing this they accepted the consequence that their endowment could be reduced, and that perpetuity could only be achieved on a lower level than before.

The essence of my remark is not that foundations should give up on their perpetuity but at least that this issue should be discussed periodically by Boards/Trustees.

The second issue is to ‘avoid the behaviour of lemmings’. Foundations moving collectively into illiquid investment products like private equity and hedge funds. Because of the low interest environment, the high volatility on public equity markets and the fear for high P/E [price/earnings] ratios, foundations get persuaded by their advisors, investment managers or investment committees to move into illiquid investment, without giving serious consideration to the risks involved.

Very often foundations hardly understand the complexity of such illiquid products. Furthermore there are wide disparities in terms of risk-adjusted returns in these asset classes; it is difficult to get access to the best illiquid managers; it may lead to an additional return (as a premium for illiquidity) but it comes with high fees; foundations forget that they will have to hold cash to pay for capital calls issued by the managers of private equity investments and that this amount of cash will subsequently not generate a return (these are the opportunity costs).

…exactly at the moment that foundations would decide to lower their spending rate, the needs for their funding in society are high.

The essence of my remark is not that foundations should avoid illiquid investments, but they should work with advisors that can give them access to the best managers and they need a sufficient level of inhouse expertise. Starting point is that foundations in their overall asset allocation try to define a budget for illiquidity: how much illiquidity can you afford to have, given your spending, incidental expenses, existing capital calls etc. In the end any product that is being added to the portfolio should be understood by the entire Board and not just by the financial specialists on the Board. Boards have a fiduciary responsibility that goes beyond the spending side and include the investment side. Any product that cannot be explained to Board members should not be purchased.

The third issue is ‘don’t push innovative instruments down the throat of your grantees’. This issue is not strictly related to the endowment side but represents a wider trend, including the spending side, of taking an investment approach in the relation with grantees. This trend emerges in the universe of foundations, interested in venture philanthropy and impact investing. In this context foundations decide, that they will not just make donations but also loans, subordinated loans, guarantees, convertible grants, social impact bonds, social equity capital etc.

The question is whether there is enough attentive listening to the needs of recipients or whether new instruments are designed at headquarters of foundations and subsequently pushed down the throat of recipients as the latest innovation and panacea for the problems in the field. The essence of my remark is not that foundations should stick with grants as the only instrument in their financial toolbox. However, if foundations want to use this kind of investment instruments, they should have an approach that is customer centred. It means a thorough communication with grantees as professional partners about their needs.

I realise that my three remarks can be questioned, and I could even question them myself. The importance is, that the issues mentioned, deserve a proper discussion on the level of Boards/Trustees without any preconceived ideas.

This article was originally published by Rien Van Gendt on his website.

Rien Van Gendt is an advisor to the Calouste Gulbenkian Foundation and based in the Netherlands.

Very insightful and also a balanced,non biased view. Partial spending down of endowment capital may make a lot of sense, as there is an inherent "inefficiency" in locking down capital for the sake of perpetuity.