The Bill & Melinda Gates Foundation has added four new members to its board of trustees. The news follows several months of uncertainty about what the Foundation’s future would look like following Bill and Melinda’s divorce. 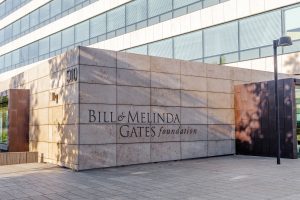 For the first time ever, the Gates Foundation – one of the world’s largest with an endowment of almost $50 billion – will be governed by people who are not named Gates or Buffet. Between 2006 and 2021, the Board of the Gates Foundation was made up of three people: Bill, Melinda, and close Gates friend Warren Buffet – until Buffet announced he would be stepping down last summer.

In a statement, the foundation said the additional trustees are an explicit acknowledgement from Bill and Melinda ‘that the foundation will be well served by the addition of independent voices’ in the wake of their divorce. Three additional people may be appointed in the future for a total of nine board members. Each trustee will serve three-year terms with a two-consecutive-term limit, and their work is unpaid.

Relatives of members are prohibited from serving on the board, with an exception for ‘a child of the marriage of Bill Gates and Melinda French Gates,’ according to the new board governing principles. That suggests that one of the three Gates children, who range in age from 19 to 25, may someday join.

Who are the new Trustees?

The new trustees have close ties to the philanthropy world and closer ties to the Gates and their work. Suzman has worked at the Gates Foundation since 2007 and has served as CEO since 2020.

Tierney is co-chair of the Bridgespan Group, which has advised the Gates Foundation, alongside many other noteworthy nonprofits and philanthropists. Bridgespan is behind the philanthropy of billionaire MacKenzie Scott, who has disbursed nearly $8.6 billion since 2019, though is doing so without any mechanism for transparency.

Shafik, director of the London School of Economics, has worked with the Gates Foundation over many years in various capacities including government and third sector roles.

And Masiyiwa, a telecom billionaire and signatory of the Giving Pledge, has been a long-time board member of the Rockefeller Foundation, as well as chairman of the Gates-funded Alliance for a Green Revolution in Africa.

‘Our new board members are strong, qualified leaders who will support the foundation and its partners in our work to promote a healthier, safer, more equal world for all,’ Melinda French Gates said in a statement.