The 2019 German funders award has been given to the German community foundation movement. It is the first time the award has recognised the efforts of a community, rather than an individual. 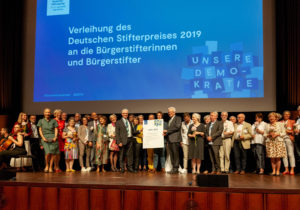 ‘Shaping democracy means assuming responsibility. More than 30,000 people are involved in community foundations for a liveable environment. This makes them a prime example of donor engagement and democratic participation,’ said Prof Dr Joachim Rogall, President and CEO of the Robert Bosch Stiftung and Chairman of the Association of German Foundations .

The community foundation movement is currently based under the umbrella of the German Association of Foundations. The award of the German funders prize is also designed to strengthen ties between the two organisations according to close observers.

Last year’s recipient of the German funders prize was Hamburg-based philanthropist Ise Bosch for her commitments to LGBT and environmental rights.

For more on the award see: http://www.stiftungen.org