Grantmaking with a Gender Lens

For the second year at the EFC AGA, I joined a meeting of the Thematic Network on Gender Equality, co-chaired by Francois Pissart of the King Baudouin Foundation, Debbie Pippard of the Barrow Cadbury Trust, and Mama Cash. 18 months ago, six foundations came together to form the gender network  which now has at least 14 EFC Funders involved. This has since had three meetings and published a guide to “Grantmaking with a Gender Lens: Five practice case studies,” according to Esther Lever of the Mama Cash Foundation. This is only the first of many activities the gender network, now with at least funds represented, hopes to undertake, in addition to hosting three meetings a year. Miren Bengoa of the Chanel Corporation Foundation volunteered to have the publication translated into French. 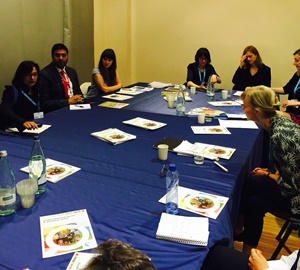 The goal of the group, according to Pippard, is to develop our own skills and urge “every member of EFC to use a gender lens… [although] there is no right way into this.”

We shared our own stories of progress within our organizations regarding using a gender lens. Peter Coltman, chair of the Joseph Rountree Charitable Trust, spoke of an internal audit JRTC are undertaking in the hopes of becoming gender transformative. A whole discussion of what is transformative ensued.

“The issue of male involvement in gender is key,” commented Bengoa. “We must be inclusive.” All present agreed that the network is promoting not just women’s issues, but wider societal issues that must use a gender lens.

“The gender issue affects everybody,” said Coltman. “What might we do to transform ourselves? It will certainly take more than an afternoon… It’s going to be a long process.”

The next step, according to Gokce Percinoglu, of the Sabanci Foundation in Turkey, is that the Grantmakers East Forum (for Central and Eastern Europe), is organizing a conference in Istanbul on October 1. Ali Khan of the EFC staff said a special session on gender lens grantmaking would be offered.

Pissart mentioned that KBF is just finishing a report on ten years of funding around human trafficking. I spoke about a new guide on “Climate Justice and Women’s Rights,” published by GGF, the International Network of Women’s Funds and the Alliance of Funds. Some work on monitoring and evaluating with a gender lens has already been done by AWID an Mama Cash, said Antonella Notari Fisher of The Womanity Foundation in Geneva. At the Oak Foundation, they have a strategic learning and evaluation system in the Issues Affecting Women’s Rights Programme, about “what can I learn so that I can be responsive all along… It’s a huge but useful undertaking,” according to Katarina Samara-Wickrama. You can’t underestimate how much time that takes, although it is well worth it.”

“In our diversity, we all find a way to take something from the activities that fit our funding priorities,” concluded Pissart.
Teresa Odendahl
Executive Director and CEO
Global Greengrants Fund