Philanthropic funding for clean air amounts to 0.1 per cent of grants worldwide, according to a new report from the Clean Air Fund. And while philanthropic funding for clean air projects has increased, it is largely disbursed by climate, environmental, and energy funders, and mainly directed to North America, Europe, India, China, and global projects. 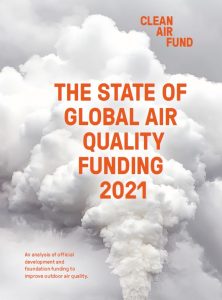 Clean Air Fund’s study, released today on the United Nation’s clean air day, also found that governments worldwide funnelled 21 per cent more aid to fossil fuels than to air quality projects in 2019 and 2020, and research suggests that government funding for clean air has actually dipped in the past two years, in comparison to where it was in 2015.

Overall, funding for air quality falls short of what is needed to tackle the problem, the Clean Air Fund’s research has found. Currently, air pollution causes over seven million deaths every year – more than twice as many as from malaria, tuberculosis, and HIV/AIDS combined.

Addressing the philanthropic community, Jane Burston, Executive Director of Clean Air Fund said: ‘It’s encouraging to see that funding for clean air from philanthropic donors is continuing to rise. But it’s surprising how little still comes from foundations outside of the environmental space – three-quarters of the current funding is from foundations focused on climate, environment, and energy.

‘Air pollution is a crisis with multiple touch-points, impacting everything from public health to early childhood development, sustainable development and equity. It’s important therefore that funding for the area is prioritised not only by those concerned primarily with tackling climate change but also by a broader range of philanthropic donors. If we can bring diverse expertise, connections, and ideas to the issue, we will be much more effective and faster in our response.’

The report also highlighted a disparity between where funding is disbursed and who is feeling the hardest effects of air pollution. Africa and Latin America receive just five and 10 per cent of aid funding respectively, despite housing some of the world’s most polluted cities and regions. Eighty per cent of aid goes via loans to middle-income countries in Asia, the report found.

Looking at solutions, the report highlights significant opportunities for more collaboration and complementary approaches between foundations focussed on climate, health, and equity, as well as between governments and philanthropy.

‘Clean air initiatives can be a secret weapon against some of the world’s most pressing challenges, but governments are largely ignoring them. We can tackle climate change, save lives, and fight inequality at the same time if we invest more and work together. Governments that address this blind spot can rapidly deliver huge benefits for people’, said Burston.