How one foundation in Eastern Europe is tackling mental health

Have we forgotten humanity and solidarity?

Shock. That was the feeling I had while reading about the famous French photographer René Robert, whom no one approached for nine hours and offered help after he slipped and fell on the street in the middle of Paris. Passers-by believed he was homeless, that he deserved to lie on the ground until the earth swallowed him, not even worthy of life and respect. The first person who, too late for Robert, came to his aid and showed a different, humane face was homeless himself. The person from whom most people turn their heads.

Why had no one come to his aid earlier, when the place where he fell was busy? Where had humanity and solidarity disappeared?

Homeless people, members of the LGBT community, people suffering from mental illnesses are just some of the marginalized and stigmatized groups. When you live in a small space, such as Serbia, there is so much fear from speaking publicly about belonging to one of the minority groups that you decide to remain silent and suffer. You are silent about who you are, you swallow your feelings, you sweep under the rug all the things that weigh you down, you disregard the things you want. In the case of people with mental illnesses, the decision to admit to someone what is inside your soul and seek professional help according to some unwritten rule entails condemnation of those around you and a label that there is something wrong with you.

Time of crisis and depression

Research shows that one in four people around the world is affected by some form of depression, whether these are emotional, motivational, cognitive or somatic symptoms. Depressed mood, loss of interest and satisfaction, decreased energy, feeling of guilt, helplessness, low self-esteem, sleep and appetite disorders, poor concentration and dark thoughts, to name just a few features of depression.

The real problem is that depression does not differentiate between its victims. It does not recognise gender, social class, intellectual level, or even age, which is why the presence of this disease is increasingly radical in young people who are just beginning to mature (suicide is the second most common cause of death in the population between 15 and 29 years of age). It is invisible to X-rays, tasteless and odourless, it attacks insidiously, and the victim often becomes aware of it only after it has been significantly contaminated by its toxic effects.

When it comes to Serbia, unfortunately, the situation is no better than in the rest of the world. The unresolved issue of the mass post-traumatic experience resulting from the recent wars, poverty, a collapsed value system and extreme polarization of society are just some of the factors that impact the worrying data, exacerbated by the Covid crisis, that almost 30 per cent of the population have symptoms of moderate to severe depression. This number is probably even higher, considering that many people suppress the symptoms of depression due to fear of being condemned by society, refusal to accept the facts or, simply, insufficient information about the effects and side effects of this, in many ways, specific disease.

In order to prevent the coronavirus pandemic from being followed by an epidemic of mental disorders, the Hemofarm Foundation, founded by the pharmaceutical company Hemofarm A.D., member of STADA Group, in cooperation with the Faculty of Philosophy in Belgrade, launched a national campaign ‘Unbreakable’ in April 2021 for the purpose of preserving mental health and fighting against depression and stigma. The importance of this campaign, which aims to provide psycho-social support to the population and, in the long run, create a society characterised by humanity and solidarity, is reflected in the fact that it was recognized and supported by the Ministry of Health of the Republic of Serbia. 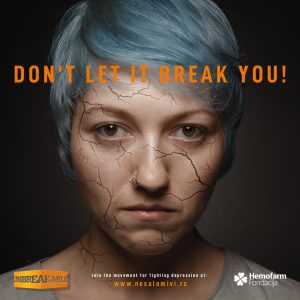 Billboards with the message ‘Watch out, fragile’ and ‘Don’t let it break you’ visible in 18 cities in Serbia were the first in a series of activities that provided professional support to people through the establishment of a free and anonymous SOS line to fight depression 0800 001 002. The line is operational 24/7, and 40 psychologists and psychiatrists from the Special Hospitals for Psychiatric Diseases in Vršac, Gornja Toponica, Kovin, and Novi Kneževac provide assistance and support to those who call. Help and support are also available via emails podrska@nesalomivi.rs and pokret@nesalomivi.rs, as well as social media of the foundation and the campaign. The ’Unbreakable’ campaign website contains texts and advice from experts for improving psychosocial health, confessions of people who are struggling with depression, frequently asked questions and answers about depression, sessions ‘A Cup of Coffee with a Psychologist’ as well as an address book of mental healthcare facilities in Serbia.

The ‘Unbreakable’ campaign very quickly grew into a movement for fighting against depression and stigma, which, in the first eight months, was joined by:

The success of the ‘Unbreakable’ campaign is reflected in the timely recognition of the importance of mental health as a topic of public interest in the field of health and the lack of local initiatives in this area. The broad support of stakeholders contributed to the success of the project. The campaign also inspired numerous institutions, organizations and individuals to join in and personally contribute to it or to launch their own initiatives in the area of mental health. The ‘Unbreakable’ campaign has been awarded nine times at global, European, regional and national competitions. Nevertheless, the knowledge that we have provided people with free professional help and support and the feeling that they are not alone remains our greatest reward.

‘Thank you for existing. We need your support.’

Messages of gratitude and support for the launch of the ‘Unbreakable’ campaign arrive every day, which is just a confirmation of the necessity and purposefulness of this nationwide activity.

Talk about how you feel

Depression is treatable. Talking about the disease is part of the cure. Let’s not silence the people around us, it is better to learn how to listen to them. Join the anti-depression movement ‘Unbreakable’ at pokret@nesalomivi.rs. Become part of the largest support network for people struggling with depression.

When we are together, nothing can break us.

Suzana Djordjevic is the Director of Hemofarm Foundation in Serbia. 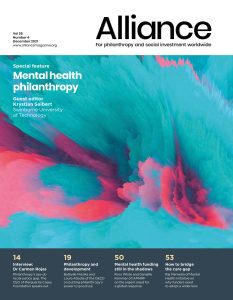