How to save the world for just a trillion dollars

Remember the film Brewster’s Millions? Richard Pryor’s character is given a vast sum of money and told to spend it. I sometimes wondered what I would do in that position.

My daydream turned into a book as I became aware of just how much money is out there. The US Treasury recently estimated that uncollected taxes amount to $600 billion a year, and $7 trillion in the next decade. According to Forbes, the top 1% control $162 trillion of assets. In 2020 alone, Fitch Ratings reported that $6 trillion was created through quantitative easing. In the US, President Biden is attempting to get Congress to pass a $6 trillion budget. The idea of my book is to show what could be done with some of this money. 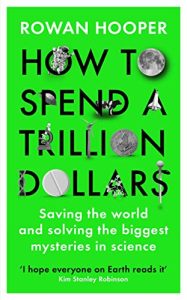 I knew that some of the world’s richest people were spending money in interesting ways. The Bill and Melinda Gates Foundation, of course, but also the Chan Zuckerberg Initiative and its extraordinary aim to cure all disease and extend human lifespan, by the end of the century.

That was enough for me to get to work. I have spent the last couple of years talking with hundreds of scientists and thinkers about what large sums of money could achieve in their fields. That research has gone into a book, How To Spend A Trillion Dollars, published earlier this year (and in 2022 in the US).

Although it’s a thought experiment, the book is very much about solutions to global problems. My hope is that it might help nudge philanthropists and billionaires into inspiring, effective and lucrative ways to spend some money. As we’ll see, I’ve had some success with Elon Musk and I hope others will follow.

Some projects require surprisingly little investment, in the context of having a trillion dollars to spend. It might be enough, for example, to lift hundreds of millions of people off the lowest rung on the poverty ladder, and to fund the education of all children around the world. The World Bank and charities such as Give Directly have found through experimenting with cash transfer schemes that one-off lump-sum payments can sustainably lift people out of extreme poverty. The United Nations has found that it would cost only an extra $39 billion a year to ensure universal education for all children in low- and low-to-middle income countries.

Other projects, such as the aim to cure all disease, would require more than the full Zuckerberg fortune, and far more even than $1 trillion. But I outline a number of ways that investment could go a long way to improving global health. And it’s important to note that money spent on poverty reduction, education, and global health saves money in the future.

The problem of climate change is another one that is expensive to fix. Again, however, there is an awful lot of good that could be done with investment in key areas, helping accelerate the transition to a green economy, and creating a sustainable means of food production. This too saves vast amounts of money and generates jobs.

A billionaire looking for the best way to spend money to tackle climate change will be swamped with different options. Personal interest will go a long way towards determining where the investment ends up. Bill Gates, for example, funds start-ups developing nuclear fusion as an energy source, as well as those looking to capture carbon dioxide from the air. If I was advising a concerned billionaire, I would advise spending on projects that could protect or enhance regions important for biodiversity and for carbon storage. There are many parts of the world that are rich in species and that are vital for drawing carbon dioxide from the atmosphere. With the loss of natural habitat around the world, we are seeing a crash in species numbers as extinction ramps up. This biodiversity crash is at least as dangerous to life on Earth, to the healthy functioning of the “Earth system”, as climate change. By investing in the protection of key areas of land and ocean from human exploitation we can tackle both problems at once; you get two solutions for the price of one.

One simple thing a billionaire could do is to buy up land and safeguard it. Planting millions of trees on deforested land, or just allowing land to regenerate naturally, has the potential to draw down billions of tonnes of carbon dioxide from the atmosphere. When a carbon tax is rolled out, and when nation-states and large corporations are required to pay for natural services that we currently take for granted, such as flood protection and water recycling, investment in areas of rich biodiversity will pay dividends.

Whoever puts the money up can name the protected zone. We might get the GoogleForestPlex, or the Amazon.com World Wide Wood, or the Elon Musk GigaForest. Elon didn’t go for that suggestion when he read my book, but he did act on another proposition. Carbon dioxide is currently present in the atmosphere at around 417 parts per million, compared to pre-industrial levels of 280 ppm. Ecosystem restoration is a key way to get carbon levels down, and as I say has the bonus of protecting biodiversity, but we need a variety of ways to reduce carbon levels. Another method is to develop technology capable of sucking carbon dioxide out of the air and locking it up.

At the moment it is possible to do this, but expensive, costing around $600 per tonne of CO2. In my book, I suggest that a way to stimulate the development of carbon-capture technology is to fund a lucrative competition. Offer $100 million to the first group able to fix and bury 100,000 tonnes of CO2, or to fix 1 tonne of CO2 for $200. After reading my book, Elon announced the launch of just such a competition. Once we have the technology to easily remove large amounts of carbon from the air, you can imagine how attractive that will be to airlines who want to be able to offset their emissions. Again, this is an investment that will pay dividends.

If we can kick-start the carbon-capture business, and get the price of carbon fixation down, then it can start to play a part in mopping up the carbon emissions that we can’t avoid.

My hope is that the book might inspire other philanthropists and investors to spend in this way too. It really could save the world.

Rowan Hooper is a journalist at New Scientist and author of the book How to Spend a Trillion Dollars. You can find him on twitter at @rowhoop.