Community Foundations in Hungary have reached an exciting milestone. On the one hand, three new foundations have emerged this year from the Community Foundation Support Programme’s set-up process, each with a unique identity and ambitions. On the other, they and Hungary’s existing community foundation face a changing and in some respects challenging situation.

First, they are having to work even harder for funding. The Hungarian government has cut the money going to the non-profit sector by about one-quarter, and what remains tends to go to a fairly narrow group of organizations. This has caused many NGOs to turn to the public for donations, which has in turn driven an increasing professionalism. 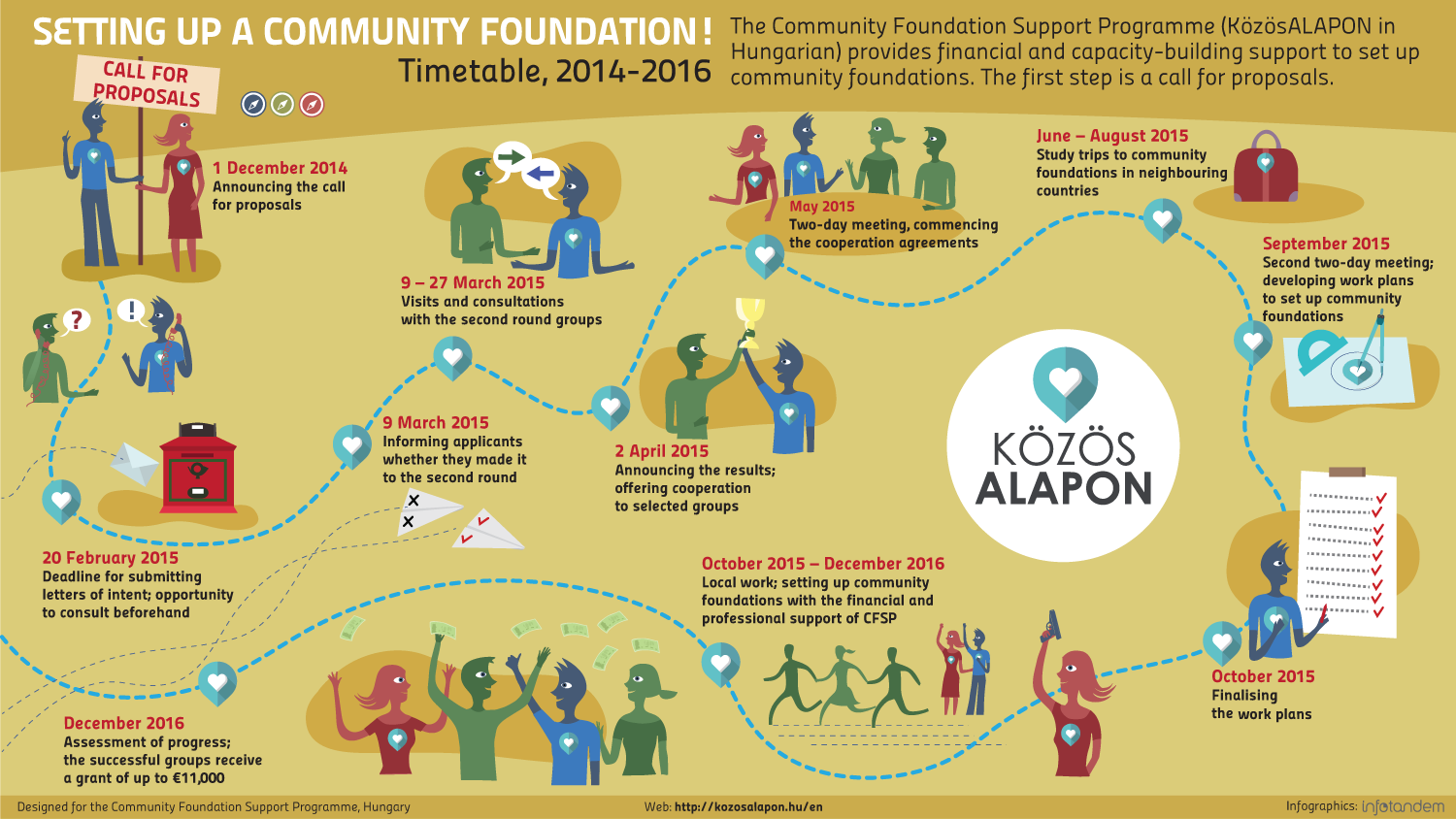 The Ferencváros Community Foundation, for example, has held high-profile events and campaigns, and meaningful engagement with residents.

This engagement has helped it to establish solid roots in its dynamic Budapest neighbourhood: in 2016, 85 per cent of its income came from local sources.

The number of volunteers, donors and relationships with locals, SMEs and institutions increased substantially too. With a ten-fold growth in income over five years, it has developed during a time of economic stagnation, against the backdrop of an increasingly centralized state.

This brings us to another ‘pressure point’. The climate for civil society has changed. The government’s anti-NGO attitude creates new societal divisions between those who believe that NGOs are mechanisms for meddling in politics and representing ‘foreign’ interests, and those who recognize the sector as a social force creating a better world. NGOs are trying to communicate to both camps about what they do and how they contribute to society.

In a multicultural region, one of the new trio of community foundations, the Danube Bend Service Community Foundation, established by local business people, is supporting projects aimed at the preservation and re-interpretation of local traditions, the engagement of young people, and events that promote local cooperation.

Further pressure, though, has come from communities themselves. We have witnessed a strong increase in interest in ‘localism’, along with a desire to create lively, flourishing communities. Volunteering is becoming more popular, and philanthropy is starting to become a more accepted social norm for people and small companies.

In various ways, the new community foundations reflect this. In southwest Hungary, the Pécs Community Foundation wants to strengthen solidarity, increase community activity and reduce social inequalities, by emphasizing local identity and decision-making. The Térerő Community Foundation for Our City in Miskloc aims to develop a culture of philanthropy through the direct participation of donors in allocating funds, and giving out small ‘hot grants’ on rapidly emerging issues.

These pressures and the responses to them have also changed the way that the Hungarian Community Foundation Support Programme works. It harnesses the growing interest shown by local communities while also helping prepare community foundations to thrive within the evolving political context.

We strongly encourage community foundations to have diverse boards so that trustees can represent different opinions and still find common ground for action – in a way, providing a role model for local society; trustees are also advised to proactively use their personal networks and standing to enhance the credibility of the newly established organization in the community. We recommend that new foundations base their work on local funding, so they need to be excellent at cultivating donor relationships, explaining what they do and at planning their growth without a need for regular injections of external funds.

The changing political climate requires us to work differently at the national level, too. We started with initial investments from large, institutional donors such as the C.S. Mott Foundation and the Norwegian Government. Understanding that such support is limited and Hungary is not at the centre of donors’ interest, we decided to move slowly toward more local, in-country resources, taking advantage of the emerging interest in philanthropy from SMEs and individuals.

We work with an increasing number of volunteers, pro bono service providers and financial supporters. It is exciting to see the support for a complex, long-term development process. It takes courage to stand by us publicly, and this sends a clear signal that they believe we are serving Hungarian communities, which is crucial for a programme like ours which continues to receive foreign funding, amid government attempts to stigmatize us as ‘foreign agents’.

Our goal is to inspire a nationwide movement. That requires us to continue to build the ecosystem in which community foundations can thrive; striking a balance between expanding the number of foundations, and building the capacity of those that have formed already.

Right now, community foundations are growing organically. Roots in the Hungarian context provide our emerging movement with credibility and resilience at the local and national levels, to ensure that we will outlive the current challenges.

For more on Hungary, see Robin Nobel’s recent blog piece ‘As Hungary slides towards autocracy, what can philanthropy do?‘.