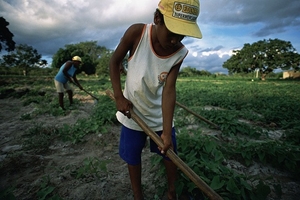 Latin America and the Caribbean is the region that has made most progress in the reduction of hunger over the last 20 years, according to a new report from the UN Organization for Food and Agriculture (FAO). The State of Food Insecurity in the World 2012 says that the percentage of those suffering hunger in the region has dropped from 14.6 per cent in 1990-2 to 8.3 per cent. Brazil and Peru have seen the greatest reductions, with 2 million fewer people suffering hunger in each country.

The FAO claims that the figures mean the region is well placed to meet the Millennium Development Goal of reducing hunger and poverty by half by 2015. Percentages are neutral things, however. This still means that 49 million people in Latin America and the Caribbean are hungry. Another thing to ponder: despite the region’s economic growth and consequent poverty reduction, says the report, levels of inequality are much higher than in other regions. ‘In parts of Latin America,’ it notes, ‘because of an unequal distribution of land and the dominance of mechanized farming, the relationship between productivity and poverty reduction is much weaker: yields have grown rapidly but rural poverty has changed little.’

Moreover, says the FAO, Latin America and the Caribbean produce enough food to meet the needs of its 600 million inhabitants. The governments of the region, however, continue to support agricultural exports, leaving behind small-scale agriculture, which is the main source of food for millions of people and generates high levels of employment in rural areas. As part of World Food Day last month, therefore, the FAO asked national authorities to support small-scale farmers. Oxfam, too, has exhorted the region’s governments ‘not to yield to the private interests of the agrobusiness sector, which oftentimes go against the generation and production of basic food’, and to ‘invest in the sustainable productivity of small-scale farmers … that will guarantee the provision of food for everyone’. ‘The close relationship between the demands of powerful interest groups and budget allocations in their interest is no secret,’ says Oxfam’s Antonio Hill, who is leading Oxfam’s CRECE campaign to boost small-scale agriculture. ‘Either we change those tendencies or we throw away a more just food system.’