Private philanthropic spending was up almost a quarter in 2020 in India, a report from Dasra and Bain & Company has revealed. Much of this increase has come from family foundations, the report found. 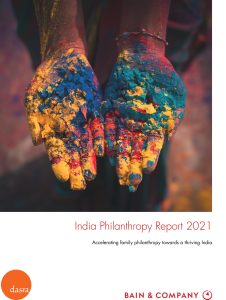 The increase of family philanthropy could be related to the increase of billionaire wealth. Like other countries, in India, the wealth of billionaires grew by 35 per cent between just the months of April and July 2020, according to the Billionaires Insights 2020 report published by UBS and PwC. Families are also giving back to society sooner, Bain & Company and Dasra report found. In previous decades, families were taking 30-50 years to establish a foundation, versus 15-20 years in the last decade.

Family philanthropy, according to the report, has fewer constraints than other sources, enabling a broader impact on the social sector. These donors have a greater ability to innovate, influence public policy, build institutional capacity, and experiment with new forms of funding. However, family foundations have biases towards certain causes such as education and healthcare, and often other pressing issues such as gender equality get neglected, the report says.

India’s increase in giving lies somewhat at odds with the nation’s tax incentives for philanthropy, which have declines in recent years according to a new study by the Centre for Social Impact and Philanthropy and Centre for Budget and Governance Accountability at Ashoka University.

‘The data across development goals are clear. India has enormous gaps in our achievement of the Sustainable Development Goals (SDGs) that have been further exacerbated by COVID-19. A serious re-examination of our tax incentive regime could not be more urgently required. Even just making data more accessible could unleash a flood of generosity from Indians across the country’, said CSIP Director Ingrid Srinath.

It’s not only cause areas that are limiting the effectiveness of family foundations in India – it is also the way they fund. The report found that 60 per cent of family philanthropists engage with non-profits through grantmaking; however, not all NGOs can absorb the scale of funding offered by these families. Only a handful of NGOs in India have an annual operating budget of more than ₹5crore ($68,000).

‘Such grant-making behaviour is better suited when the non-profit ecosystem is more sophisticated and has a larger scale,’ the report said.

Though philanthropic spending in India is on the rise, the report found the social sector remains underserved.

‘Compared with other BRICS countries, India under-spends on the social sector – reflected in its relatively poor ranking (117th) on the Sustainable Development Report. Central government spending on the top 10 social programmes accounted for the vast majority of overall public funding for the social sector.’