Opportunity and risk – discussions at the Alliance Breakfast Club

Following the June issue of Alliance, with a special focus on Opportunity, risk and global development, last week’s Breakfast Club looked at the question Should foundations take more risks in pursuit of social justice? 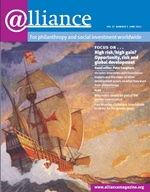 To kick off the discussion, each panellist was asked to describe a time they had taken a risk. Stephen Pittam, of the Joseph Rowntree Charitable Trust (JRCT), began by recounting the foundation’s involvement with the Basque peace process (detailed in the article Taking risks for peace in the June issue of the magazine). Charles Keidan, director of Pears Foundation, spoke of his visit to the Gaza strip in 2009 (further information about the work of Pears Foundation can be found in his article Philanthropy’s tugboat).

Panellist Carolyn Hayman OBE, who is co-founder and chief executive of Peace Direct and a member of the Network for Social Change, compared her funding of an ethical mining business in the DRC with her involvement with Solar Aid, which aims to eradicate the kerosene lantern from Africa. Despite both projects being important ideas from charismatic entrepreneurs, the former collapsed very quickly whereas Solar Aid, through a long process of trial and error, has developed successful methods of becoming sustainable. From her experience, Hayman’s recommendation was that if something sounds too high risk to recommend to others, that is a good sign you should be wary of it yourself.

The topic of investing in projects for the long term was raised again and again throughout the discussion. Stephen Pittam’s example of the 18 years JRCT funded the campaign for a Freedom of Information Act before it was introduced – and it was even longer before it began to have an effect – was a great illustration of the difficulties of measuring success in the world of philanthropy. Given that success can take so many years to become apparent, when do you measure?

There was also some debate about whether impact measurement can actually deter risk-taking, as foundations do not want to risk apparent failure. Philanthropy consultant Diana Leat felt that impact measurement could deter risk taking, but pointed out that foundations weren’t great risk takers before the current emphasis on impact evaluation. In Stephen Pittam’s view, foundations are fundamentally conservative because their main task is to preserve their endowments.

Another big issue was who takes risks. Robert Dufton, director of Paul Hamlyn Foundation, felt they were more likely to undertake risky activities when undertaking work themselves as a foundation rather than handing grants to others. Stephen Pittam disagreed. In his view, foundations not well placed to be engines of social change, and having a grantmaking focus is very important. If you give out a clear message that you are willing to take risks and have a culture of taking risk, then people will find you. The notion of prudence was discussed as not referring to being careful, but instead being wise, as too much caution can limit the scope of a foundation’s work. While due diligence is vital, having the vision to consider funding activities which may be controversial, push the boundaries of innovation or are outside their usual range of activities can be a great way to further a foundation’s original aims.

Vision is related to a foundation’s values, in particular the need for commonality of values between staff and board members. Stephen Pittam outlined JRCT’s board structure, where board members are very engaged in grantmaking activities and do themselves visit grantees, which he feels is one factor in the foundation’s willingness to take risks. Without visionary leaders, foundations can end up with a lowest common denominator of conservatism  among board members. However, a clear value base and clarity about what course of action to take can help to ameliorate perceived risks: if a foundation is achieving its mission – ‘doing what is right’, as Pittam put it – there is little room for criticism.

Funders should be not ‘risk-averse’ but ‘risk-alert’, suggested David Carrington, consultant and APT board member: while risks should be carefully considered, funders should not be scared of them but actually aware of the opportunities they may offer – a view endorsed by many others at the meeting. Charles Keidan said that a willingness to take risks and learn from mistakes can only benefit a foundation’s long-term activities.

It was concluded that while foundations, and individuals in general, are not inherently likely to take risks, there is a need to think about what foundations are for, given their special place in society, ensuring that their values and vision are not lost among excessive caution about risk or worries about how to define success.  As Diana Leat said in her closing comment to the group, foundations have a lack of accountability which enables them to have a much greater amount of freedom than other organizations, and she cannot think of a better, or a worse, time to wave a hand in the air and say so.

The Alliance Breakfast Club for the June 2012 issue took place on 3 July 2012 at the offices of the Paul Hamlyn Foundation.

Regrettably, we must say it aloud that Foundations very often operate in closed circles. They have a selected number of clients and advertize themselves within a club of friends including media. Many grant looking, genuine NGOs and Community Based Organizations have no information about Foundations and their criteria. We believe that Alliance should arrange a face to face dialogue between Foundations and Civil Society Organizations. Those from the islands states are the ones to suffer the most. Why not arrange such a dialogue in one of the Islands? As a long serving partner of Alliance, we can help if such a proposal is agreed to be held in Mauritius.