The US’s largest grantmaker Fidelity Charitable has funded anti-Muslim, anti-LGBTQ, and anti-immigrant groups to the tune of millions of dollars over the past five years, according to research released by a group dedicated to unmasking the organisation’s grantmaking. 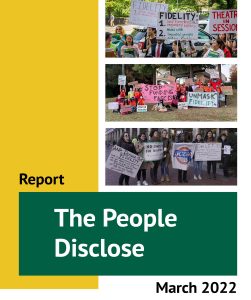 The report, ‘The People Disclose’, shows how 10 organisations that further systemic oppression globally have received direct contributions from Fidelity Charitable, including more than $18 million in 2019 alone.

The report was written by the #UnmaskingFidelity coalition, which is composed of six local and national organisations, and it adds to growing concern that Fidelity Charitable is fuelling violence in the United States and internationally through its donor-advised funds.

The coalition contacted Fidelity in Fall 2021 with support from 40+ organisations and hundreds of community members, demanding they publicly disclose the total amount they have contributed to the 10 organisations identified, along with the profits they have earned from these contributions and current DAF policies, but they have not responded.

‘Anti-Muslim violence is thriving globally, and anti-LGBTQ policies are expanding across the US. Fidelity needs to acknowledge its role in these systems of oppression, establish a progressive DAFs policy, and begin to repair this harm,’ said Fatema Ahmad, Executive Director of Muslim Justice League.

‘Funding those who undermine and limit rather than advance human rights is not a neutral policy, it’s rubber-stamping systemic oppression.’

Fidelity Charitable has been under fire for years for permitting sizeable investments into discriminatory and prejudiced organisations. A petition with over 1,400 signatures called for Fidelity to publicly disclose these donations and be transparent about its donation policies. Following protests in 2019, Fidelity Investments and Fidelity Charitable representatives met with the coalition but have since refused to change or disclose their policies. Last year, groups protested outside of the Fidelity Charitable headquarters in Raleigh, North Carolina, and Boston to draw attention to the charity’s donation policies.

For more information or to read the report, visit unmaskingfidelity.org.

Nothing surprises me after I learned that the Ford Foundation had just appointed a Nigerian billionaire as a Ford Trustee when it has been reported in local Nigerian media that his company has occupied over 11,000 hectares of forest in Edo State, Nigeria, to plant a one crop economy of oil palm. Residents of this forest were evicted with the blessing the local government. Stories of their protests appeared in local papers. Nonetheless, Ford's response to the appointment of Gbenga Oyebode, director of the Okomu Oil Palm Company, was "We'll keep an eye on it." Ford, unlike Fidelity Charitable, does not support racist, anti-immigrant organizations, but they will cover a billionaire trustee with a questionable history of displacement in Nigeria.