Established in 2004, the Inner Mongolia Lao Niu Foundation works mainly on environmental protection, culture and education, and industry promotion. Its work involves multiple SDGs. As of 2019, it has carried out 255 public welfare projects in 31 provinces in China, and in countries including the United States, Canada, France, Italy, Denmark and Nepal, with its public welfare expenditure totaling RMB 1.515 billion. 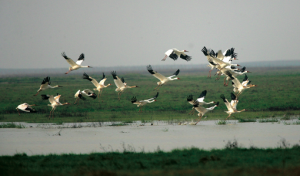 The Life on Land project was jointly initiated by the Lao Niu Foundation and a number of public sector and academic bodies to promote and protect China’s natural wetland resources.

At present, the country has 5.7959 million hectares of coastal wetlands. These are located in the most economically developed and densely populated areas of China. They have formed an important ecological barrier in these areas and play an irreplaceable role in regulating the climate and maintaining ecological balance. In addition, 246 migratory bird species breed and overwinter in these coastal wetlands , 24 of which are globally threatened. At least 140 coastal wetlands meet the requirements of internationally important wetlands, internationally important bird areas, or the East Asian – Australasian Flyway Partnership (EAAFP) standards. Their importance of their role in ecological protection is therefore evident. However, the outlook is not optimistic.

In the past half century, China has lost 53 per cent of its temperate coastal wetlands.

The main problems are 1) Wetland protection laws and regulations are not complete; 2) Local management capabilities need to be improved 3) Economic development interferes with wetland protection; and 4) Publicity and public education is insufficient.

Because of this, the Coastal Wetland Project has established two phased goals. The first phase (14-17 years) will document the condition of the wetlands through research, share information and experience through the creation of a platform, provide professional training, promote coordinated actions and conduct public advocacy. The second phase (17-20 years) will implement actions on the basis of research to promote effective wetland protection.

The research report of the first phase of the project, China Coastal Wetland Protection and Management Strategy Research, has been published and second-phase projects so far implemented include protection of China’s mangroves, establishing a database of coastal waterbird habitats in China, establishing a standard system for wetland education centres (three wetland education centres have been established so far) and the planning and implementation of the first wetland protection area in Ant Forest, which allows 13 million people to directly participate in an energy exchange, so as to popularise public education and advocacy.

The stakeholders of the project include the government, scientific research institutions, the coastal wetland protection network, and public welfare organisations. Among these, the Institute of Geographic Sciences and Natural Resources Research of the Chinese Academy of Sciences, provides expert resources and technical strength to the research. The coastal wetland protection network with 82 members is responsible for coordinating publicity and joint promotion and social organisations carry out projects based on the main findings of the research.

Based on the research report of the first phase, Policy Recommendations to Decision Makers have been submitted to the State Council, the National Development and Reform Commission, the Ministry of Environmental Protection and the major leaders of six provinces and cities including Liaoning, Hebei, Tianjin, Jiangsu, Shanghai and Zhejiang. It has attracted the attention of coastal provinces and municipalities, and provided a reference point for the National Development and Reform Commission and the Ministry of Environmental Protection, and indirectly promoted the State Council’s 2018 Notice of the State Council on Strengthening the Protection of Coastal Wetlands and Strict Control of Reclamation. The impact of the report and the exchanges and advocacy of the project at the international level have contributed to the approval of the Migratory Bird Sanctuaries along the Coast of Yellow Sea‑Bohai Gulf of China to be included in the World Heritage List.

The impact of the project is gradual. The project will continue to play a role in data support and network member collaboration. After the formation of China’s “two horizontal and one vertical” wetland protection pattern in the future, the project will play an even bigger role.

But future wetland protection in China requires constant public advocacy and public participation. From the worldwide aspect, the biggest challenge of the project is the challenge of global cooperation on biodiversity. This is not only an environmental issue, but also a development, economic, security, social and moral issue. If a ‘grey rhino’ event[1] is to be avoided, the protection of wetland, an ecosystem with the richest biodiversity and ecological functions in nature, is urgent.

Lan Keqi is the Project Manager of the Inner Mongolia Lao Niu Foundation.