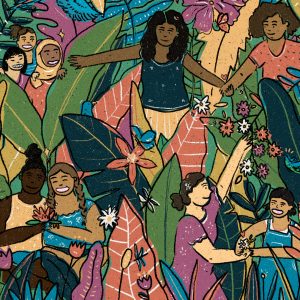 So often in philanthropic practice values of solidarity, reciprocity and power sharing are pitted against notions of efficiency and scale. The Global Resilience Fund is an example to the sector of what we have always known as feminist funders: it is possible to seed power to young activists, and to do it quickly. It is possible to move a relatively large number of grants in ways that align with young activists’ realities. But it requires critical analysis of grant-making practice, and a commitment to ceding power to the activists who best know this work.

‘Emergency funds often use the excuse of expediency and urgency to short-circuit inclusive participatory processes. We have been taught that this is a necessary trade-off’, said Judy Diers, Program Officer, International Programs at Ford Foundation. ‘But the Global Resilience Fund was able to hold both at once, quickly getting the fund off the ground but never compromising the participatory nature of selection.’

Some key features of the fund enabled a reframing of power in philanthropy, including the lowering of barriers to participation and support to first-time-funded groups to access resources.

It began with a simple and flexible application process: ‘To ensure we were resourcing young feminist activism at pace and scale the application process needed to be simple, accessible, inclusive and robust enough to adapt as the fund evolved,’ said Liesel Bakker, Programme Officer, Purposeful. ‘The application form was kept simple, with minimal background information required and brief questions.’

These features were adapted further in Sierra Leone, ‘We adapted the global process in Sierra Leone to truly centre the girls and young womxn most removed from power,’ said Zanele Sibanda, Director, Purposeful. ‘We took applications over WhatsApp, voice notes, in person and over telephone. We made sure that literacy was no barrier to application. We saw that when you lower barriers you uncover the creative, imaginative and brave action that girls are taking.’

‘We have met young activists where they are, instead of them conceding to us,’ added Purity Kagwiria, Director, Purposeful. ‘Seemingly small adjustments to the process – adjustments that really centre the realities of what it means to organise as a girl – are part of what has made the fund a success.’

The reframing of power was also characterised by the inclusion and prioritisation of the expertise of young activists. ‘The design of the participatory process bringing together 30+ young feminist panelists was swift in the start up and iterative in the months following,’ said Ruby Johnson, Fund Advisor and Former Co-Executive Director of FRIDA, The Young Feminist Fund.

‘Seemingly small adjustments to the process – adjustments that really centre the realities of what it means to organise as a girl – are part of what has made the fund a success.’

‘To do this with speed, we started with our original base, drawing on recommendations from movements and funders in our networks, and by building upon the expertise of peer participatory grantmakers. At the heart was openness and transparency about our limitations, and balancing things that were non negotiable, the urgency and need to prioritise genuine participation and decentralisation of power.’

Trust-based, network approach to due diligence

We also found the need to get creative about due diligence to align with the realities of young feminist organising. As described by Gloria Rosales of Women Win, on secondment to the Global Resilience Fund, in practice this meant ‘Due diligence consisted of a set of very simple questions, asking partners to provide information about the applicants. This process was based on trust, and allowed the fund to reach under-resourced groups which had often never been funded before due to their lack of official registration and other typically required documents. It also allowed us to quickly disburse the funding to the groups, while still building relationships’.

The process moved beyond functional reporting to leverage genuine learning for young activists and for the field. ‘The learning agenda for the fund is rooted in the same feminist principles and commitment to participatory approaches which it is grounded upon,’ said Boikanyo Modungwa, Senior Manager for Feminist Learning, Purposeful. ‘The learning agenda was collectively defined and informed by a commitment to leverage genuine learning for young activists as well as the philanthropic field.

‘The approach moves away from functional reporting to facilitating learning conversations as spaces for open sharing and peer learning, unearthing reflections and recommendations to challenge philanthropy to be more responsive and to inform young feminist activists organising. Finally, it seeks to shift understanding on what counts as evidence: young activists’ experiences, stories and perspectives are more than just anecdotes and should be used to inform the field.’

From the political to the practical: so much more to learn and do

Now more than ever we must show up in this work with the same bravery and political clarity that young activists bring to their organising. It is not enough to move money to radical transformational work: we must embody those principles across our work. The Global Resilience Fund offers one example of how to do this politically, but also practically, adapting practice to better respond to the realities of young feminist organising. There is much more to learn, to try and to do – to make mistakes and to try again – as individual funders and as a field. In part 3 we will go on to explore the broader lessons for philanthropy.

Rosa Bransky is a feminist activist, strategist, researcher and the co-founder of Purposeful.

Information is power am learning , ilitracy should not be a barrier in supporting grass roots women feminist

Hello There, Nice work. Can we form a collaboration.