About Alina Porumb
Alina Porumb is strategic philanthropy programme director with Romania’s Association for Community Relations (ARC). The core of her work in the last ten years has been helping to create an active community foundations movement in Romania, offering a model of self-reliance and mutual support to communities at a time when they were accustomed to look outside for resources and assistance. ARC is a national support organization for advancing philanthropy in Romania.

There are now 13 Romanian community foundations serving 37 per cent of the population and investing a total of $560,000 in local communities, with three more in the process of setting up. ‘Simply put,’ says Alina Kasprovschi, director of the Bucharest Community Foundation, ‘the community foundations network wouldn’t have existed in Romania without the vision and personal belief of Alina. What Alina has helped build is not just a number of local initiatives and foundations, but a system of learning and mutual support between foundations for the long term.’ 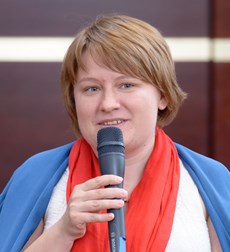 Her work with the Initiative for Strategic Philanthropy in Central and Eastern Europe (INSPIRE), which she set up in 2012, has helped to spread knowledge of philanthropy advice and donor engagement to countries of the region including Bulgaria, Czech Republic, Hungary, Poland, Romania, Russia, Serbia, Slovakia, Turkey and Ukraine.

She is also involved in international philanthropy initiatives such as WINGS, the Global Fund for Community Foundations, YouthBank International and Bolder Giving.

In her own words …
“Working in community development in the NGO sector, I knew that the main issue was that funds came from outside the communities. Local people wanted to do things, but without flexible resources they felt they weren’t in control of their own fate.

I learned about community foundations in 2003 through the Mott Foundation. Two years later, with ARC, we decided to test out whether they might work in Romania. Community foundations were closer to the initiatives, to communities; they could work at the grassroots level and inspire local citizens to take action and find the space for their generosity to respond to challenges and build solidarity.
We now have a network of community foundations in Romania, and I think the biggest achievement is that it operates independently and has momentum. It has its own dynamic of people who are building something because they are motivated, because they have ideas and ways to support them. With colleagues and donors, we have created a framework of leadership and self-development at both local and national level.

At first, we wanted things to go fast, but now we see how important it is to give time to each stage in the set-up and consolidation of community foundations. Romania is still a challenging environment. Individual giving is growing, but time is needed to build trust. Trust is the thing that is most necessary for sustainability and we need to invest a lot in work and good communications to build it and maintain it.

Both in my work with community foundations and in INSPIRE, the biggest challenge is to find people who have the interest and commitment for philanthropy infrastructure work. It’s the biggest leap of faith – you wonder to yourself, ‘will it work? Will people respond?’ We have found that these people are always there, but you have to find the right way to discover them and communicate with them.”