The six finalists for this year’s Olga Alexeeva Memorial Prize are announced in a special supplement published with the September issue of Alliance. They come from Brazil, China, India, Romania, Russia and the USA – and they are equally diverse in terms of the variety of their approaches to building philanthropy. Click here to read all about the finalists and to learn more about the Olga Prize. The winner will be announced in early October. Throughout September, we will be publishing profiles of each of the finalists in this blog.

About Marta Cabrera
Marta Cabrera is president of EMpower – The Emerging Markets Foundation, based in the USA. In 2000 she was one of the founding members of EMpower. EMpower invests in local solutions for at-risk youth in emerging market (EM) countries by tapping into the resources and energy of EM finance sector professionals. 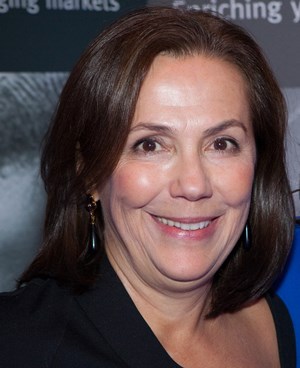 EMpower started out as a simple idea: wouldn’t it be great if EM professionals who had made their substantial careers in the finance sector in turn redeployed their resources to EM countries in a direct, targeted way?

Fifteen years later, it is clear that EMpower’s model has unleashed an interest in philanthropy driven for and by EM professionals, wherever they live. These professionals are actively involved in making decisions about where the funding is directed and participate in EMpower’s strategic vision and growth. In addition, all supporters are encouraged to visit grantee partners in the field, meet them when they travel to EMpower offices around the world, give their opinions on grants pipeline and strategic portfolio, and lend their unique skills to benefit its grantee partners.

Marta Cabrera has led EMpower since 2004. She has expanded its activities to the point where it has staff in five countries and boards of directors in three: US, UK and Hong Kong. It also has a wide network of supporters who live and/or work in their countries of origin, as well as in global hubs and other EM countries.

In her own words …
“Working in emerging market finance, and travelling as a banker, despite going from limousine to four star hotel, you can’t help seeing what these countries are really like. Among my colleagues and me, there grew a real understanding that we had to give back. That was the seed of the idea and it still applies.

At first we thought we could do everything but we found out very quickly we couldn’t. The Millennium Development Goals had a big influence on the development agenda at this time and a lot of attention was going to primary education and microfinance. There was a gaping hole in adolescence and transition to adulthood, which is where we thought we should go. From day one, we wanted to be grantmakers to community-based organizations that were already doing really good work, and we wanted to have a direct link to those organizations rather than going through intermediaries.

A very simple idea and a very simple vehicle have resonated across countries and over the years. That, and the fact that the people involved, whether running or supporting the organization, refer to EMpower as ‘we’ and ‘our’, gives me my greatest satisfaction. Supporters are taking ownership in our work, making it the vehicle for their philanthropy, recognizing that EMpower was created to get them directly involved in countries and on issues they deeply care about.  Through substantive presentations with grantees (usually the first time finance professionals have come face to face with a leader in the social sector), events to convene like-minded supporters, and other forums to include family and friends, EMpower creates an environment where people are driven to get involved .

There’s still so much that can be done in terms of bringing together the needs of our grantee partners with the resources, networks and knowledge of our stakeholder base. Except on an ad hoc basis, though, we’ve not been able to do that. If we had resources to do this type of donor engagement systematically, EMpower’s impact would really explode.

We are changing the way we do things. Instead of just looking at our grantee partners organization by organization, we are now looking at the needs of the communities in which they work and live, and assessing our impact in those communities.

Our biggest challenge was the financial crisis. Since our constituency is finance sector professionals, it hit us very hard. In fact, we didn’t know if we were going to survive. But by making drastic cuts, we did, and we were able to meet all our existing commitments.

In many of the 15 countries where we work, it’s a challenge to keep up with changes in the regulatory regime and to stay clear of any constraints. One of the challenges for the EM sector is that many countries have had authoritarian governments where social issues are the province of the state so there is no robust social sector to take on these challenges.

We want to extend our reach. We want, for example, Indians to support EMpower in India, and to give them the experience of direct engagement with the organizations they support that others in our network talk about.”