New research has found that on the boards of Swiss foundations: almost two third of trustees are men; less than five per cent of trustees are under the age of 40; and there is very little diversity in terms of nationality amongst Swiss foundation trustees. Yet a majority consider their board to be diverse, and 90 per cent consider diversity to be an advantage for their board. 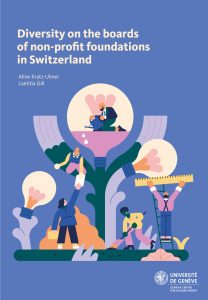 These statistics come from research produced by the University of Geneva’s Centre for Philanthropy which analysed the makeup of the boards of Swiss Foundations. Report authors Dr Aline Kratz-Ulmer, an academic fellow at the University’s Centre for Philanthropy, and Laetitia Gill, the Centre’s Executive Education Associate surveyed approximately 1,300 people, representing over 100 non-profit foundations across French and German speaking Switzerland.

According to Kratz-Ulmer and Gill, the survey was not designed to provide a representative analysis of diversity on Swiss foundation boards, but rather to provide a sample of these boards to identify key characteristics.

‘While it is encouraging to see 90 per cent of participants recognising the value of diversity in boards, it is clear that we all need to do more to ensure that our own governance structures reflect the deep commitment to diversity and inclusion that we demonstrate in our grantmaking,’ said Laudes Foundation CEO Leslie Johnston. ‘I hope that this report serves as a call to action to all of us in raising our own ambitions to bring in new voices and those with lived experience into our boards.’ 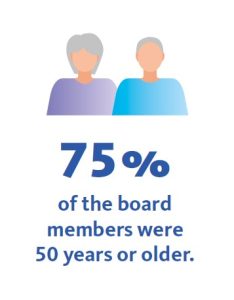 The report found that some of the biggest gaps in representation were amongst the age of trustees. Seventy-five per cent of board members were 50 years and older, while only five per cent were under 40 years old. Foundations are doing little to address this: almost 90 per cent of those surveyed did not set an age limit for board membership in their articles of association.

Diversity amongst nationality was also lacking, according to the research. Almost 80 per cent of board members were Swiss nationals. This figure is especially striking when measured against where the foundations that were analysed operate: 57 per cent had programmes abroad. 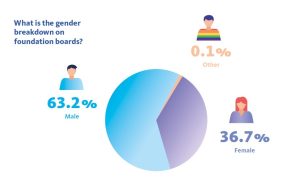 Gender was another gap for foundation boards. Almost two-thirds of board membership are male. Women make up the other 36 per cent, while people who don’t identify as either male or female are only represented by 0.1 per cent of trustees.

In spite of this, two-thirds of trustees considered their board to be diverse. Ninety per cent considered diversity to be an advantage, and 86 per cent thought that diversity contributes to a foundation’s efficiency.

When it comes to efforts to increase diversity, measures that could help are adopted varying degrees. In 80 per cent of cases, foundation board members have time-limited terms. Under current Swiss law, to benefit from tax exemptions, foundation must agree not to pay their board members any compensation; however, 35 per cent thought that offering compensation to trustees with help increase diversity and professionalism.

The research also found that Swiss foundation boards included almost no beneficiaries amongst their trustees – and in 98 per cent of cases, the foundation’s articles of association did not allow their beneficiaries to be represented on the board. This opens of up questions of whether the foundation has the necessary expertise to meet its purpose without the voices of its grantees represented amongst leadership.

The report concludes with some recommendations for increasing diversity. The authors suggest awareness-raising and training for foundation board members could help increase diversity. They also suggest setting age limits and term limits for trustees.

‘I welcome the results of this survey… Clearly, we have some work to do,’ said Lynda Mansson, Executive Director of the MAVA Foundation. ‘However, accenting diversity at the board level cannot be just an exercise of ticking the right boxes. We must truly listen to the diverse voices around the table and not maintain old power imbalances. In many cases, this will require a fundamental shift in culture and mindset.’

To read the full survey, click here: Diversity on the boards of non-profit foundations in Switzerland.