#NCFF17 – From local to global

The Australian National Community Foundation Forum was held in Melbourne last week, with Ian Bird of Community Foundations of Canada (CFC) as our guest. The Forum has caused me to reflect on what it means to be a community foundation in 2017. There are aspects that remain constant and new collaborative opportunities that are emerging.

The following quote from 20 years ago still rings very true today:
‘Things happen. There are natural disasters, and man-made ones, like the collapse of a major employer. But if communities have organized themselves and built their capacity, they’ll weather those changes better. And if they’ve saved, by building an endowment, they’re even more able to bounce back.’ Sue Talbot, Montana Community Foundation (Aspen Institute’s Rural Development and Community Foundations Initiative, funded by the Ford Foundation)

This local self-help approach which community foundations embody is well understood within the community foundation movement around the world. Using a collective approach to tackle local challenges faced at any particular time has been proven to make a difference in many communities, from Melbourne to New Orleans. 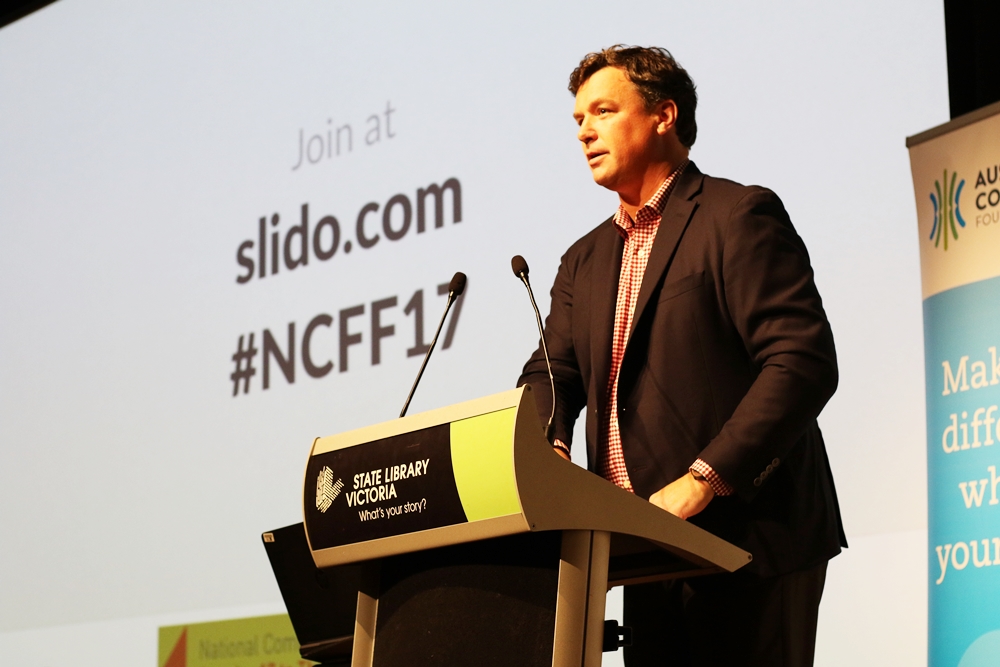 The new dimension that was thought provokingly presented by Ian Bird, President of CFC, in his keynote address at the National Community Foundation Forum in Melbourne, was that many of our shared challenges are caused, not simply by local or national factors, but by global influences.

Community foundations now find themselves dealing with many cross-border issues. The opportunity to collaborate across community philanthropy has grown enormously in the last ten years because we have become more connected through the economic, social and environmental challenges faced globally.

One session at the Forum called GLOCAL focused on linking the impact of philanthropic investment and partnerships to the impact measures of the Sustainable Development Gaols (SDGs). The importance of cross-sector and cross-border collaboration is an interesting theme.  The idea that SDGs give us a shared language that can help us translate our thinking and solutions between business, not-for-profits, governments and the community, and across languages, was a useful insight.

The report confirmed some of the key challenges we are working on, such as homelessness and affordable housing, the sad increase in older women ‘couch surfing’, and protecting healthy waterways, which are essentially local Australian issues. Other issues such as youth unemployment, food security, social cohesion and the increasing incidence of heatwaves are issues that affect Melbourne but also other communities as well.

Community foundations can be a knowledge exchange where local challenges are tackled and global challenges are brought down to the local level so that ideas, funding, people and partnerships can be brought together.

The Philanthropy Tool Box workshop I presented at the Forum, which builds on the concept developed by Luc Tayart de Bohms, in Creating Impact in a Globalised World, generated a wonderful discussion. There is so much we can do alongside grants to make an impact.

Community foundations in Australia are using partnerships and collaborations extensively, commissioning research to find out more about issues, actively engaged in policy work, using impact investment in line with their impact areas, and using communications networks to engage new people.

Giving circles were another interesting topic of reflection. The hands down favourite amongst the community foundations audience was Geelong Community Foundation’s Philanthropy 500, a new network of 90 younger donors, aged under 30, all giving $500 per annum, half towards a flow through grant and half to build an endowment. Philanthropy 500 is a thoughtful balance of giving now while also investing in the future of a community.

Australian community philanthropy has grown from a handful of foundations to over 40 during the last 20 years. My overriding impression after the Forum is that, as a network of independent community asset holders, we have even more potential.  Community foundations are well placed to make an impact locally in our globalised world.

Hi Catherine Thanks for your comments and support of the growth of Community Foundations across Australia. Your guidance, advice and insight will ensure that the potential is realised. Thanks also for the shout out regarding Philanthropy 500, Geelong Community Foundation's Collective Giving Program. We are very proud of our achievements and I acknowledge the fabulous team of young professionals who have volunteered their time to make it happen. So pleased to share our model with other Community Foundations. Thanks again.