A new issue of Alliance magazine is out now! 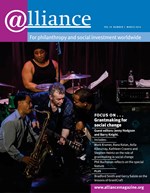 This issue has a focus on ‘Grantmaking for social change.’

The special feature includes articles from Africa, Brazil and Turkey showing how vital grantmaking is where philanthropy and civil society are emerging, and a piece from Helena Monteiro on why grantmaking matters to WINGS. A series of short articles showcases successful grants from countries as diverse as the USA, Ireland, Sri Lanka and Namibia.

The special feature also includes Andrew Kingman considering ‘catalytic philanthropy’ in action in Mozambique and a write-up of an Alliance webinar in which participants discussed the role of grantmaking and other approaches in achieving social change. Context is everything, concludes Phil Buchanan, reflecting on the various contributions.

Also in the March issue of Alliance: Gerry Salole and Bradford Smith look back at three years of working together on the GrantCraft partnership, now ending; opinion pieces on foundation transparency and accountability; articles on the growth of collective philanthropy in Asia and the reasons for low levels of giving in Latin America; and letters in response to December’s special feature on next gen philanthropy.

You can buy this issue for as little as £15, here>