This report ‘Form and Function’ reflects the research undertaken into the governance, financial management and grantmaking practice of twenty one South African philanthropic foundations during the course of 2015.

This report was to assist existing foundations as well as emerging entities to benchmark their practice. Based on an extensive questionnaire, interviews were done with 21 foundations through their representatives including foundation staff as well as the founders where appropriate. 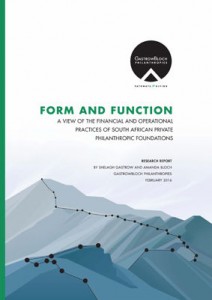 The report produced some interesting and unexpected results some of which are outlined below:

Other findings of the report can be summarised as follows: