At the end of February, the first case of COVID-19 in Nigeria was recorded in the city of Lagos – the nation’s defacto commercial capital with a population of almost 20 million people, about 4 times that of Finland.

A month later, confirmed cases had risen to 93 and become more widespread across the country, forcing the federal government to order a full blown lockdown by 30 March across the three key Nigerian states where COVID-19 infections were most prevalent.

Philanthropic responses to the pandemic have generally followed two tracks: that of responding to the immediate crisis, such as donations of cash and in-kind items to private and public healthcare providers, and that of addressing the economic effects caused by strict lockdowns. 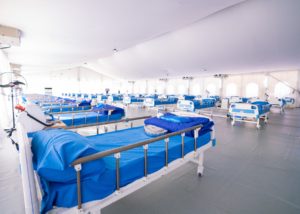 In Nigeria, one of the first major philanthropic responses to the pandemic was the donation of a 110 bed isolation centre to the Lagos state government by Guaranty Trust Bank (GTB) PLC with 50 per cent of costs covered by the African Finance Corporation. Commissioned on 28 March, the facility was delivered within a week to strengthen the existing isolation centre at the Infectious Diseases Hospital in Lagos.

In recognition of the scale of the challenge facing the country and the ability of Federal and State Governments to respond appropriately to it, on 27 March, a private sector coalition, spearheaded by the Central Bank of Nigeria with the Aliko Dangote Foundation and Access Bank, announced the creation of the Coalition Against COVID (CACOVID) to mobilise private sector resources toward supporting the government’s response to the crisis. 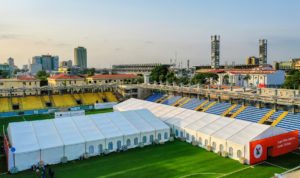 To date, CACOVID has mobilised more than $72 million in donations, and it comprises more than 50 partner organisations including Nestle, KPMG, MTN, CitiBank, and CNN.

In addition to local philanthropic donations, there were also several in-kind and cash donations made to the Nigerian government from multilateral aid agencies, including the EU, which gave Nigeria a grant of €50M to tackle the pandemic; the UN, which donated 50 A30 ventilators and personal protective supplies worth $2.2 million; and UN Women, which donated the equivalent of $100,000 in support of the purchase and distribution of palliatives to the most vulnerable women across 14 states in Nigeria.

Serious questions have been raised about the response thus far, however. Some individuals and members of the wider civil society in Nigeria have asked why banks making up a sizeable proportion of the CACOVID coalition chose to make donations to the federal government when they could have directly reached their most vulnerable customers via existing internal databases.

Others still have questioned the sincerity of the Federal Government in its response especially with respect to the receipt of donations and the disbursements of palliatives to the most vulnerable. Reports of lopsided distribution of palliatives based on political and sectional prejudices have been rife in local newspapers following the government’s announcement when the lockdown was instituted that it would leverage the distribution mechanism of the Conditional Cash Transfer program it created in 2015 to distribute the palliatives.

Coalitions of (I)NGO’s and other CSO’s including Upright4Nigeria led by ActionAid in Nigeria, whilst implementing their own palliative schemes in effort to make up for the lopsidedness of the federal government scheme on 22 April, demanded that all governments must disclose to citizens the value of all donations received and publish the list of beneficiaries of the palliatives.

On 4 May, another coalition of NGO’s led by Oxfam similarly called for transparency on the Federal government’s part in the utilisation of a further $3.4 billion emergency support loan from the IMF that was granted in response to the pandemic.

Though philanthropy in Nigeria has mobilised to respond swiftly to the COVID-19 crisis,  Nigerians are still waiting for answers to the questions raised in the course of this response.

Shaninomi Eribo is Programs Director at the Association for Research on Civil Society in Africa (AROCSA), an organisation founded in 2015 with the support of ARNOVA and the Ford Foundation West Africa office to advance a community of excellence in civil society research and practice on the continent. The views expressed in this article are the personal opinion of the author and do not reflect those of AROCSA.