GLASGOW – The Global Methane Pledge, a public-private partnership to reduce methane emissions by 30 per cent by 2030, has raised an additional $105 million in the few short weeks since the pledge was launched in October. 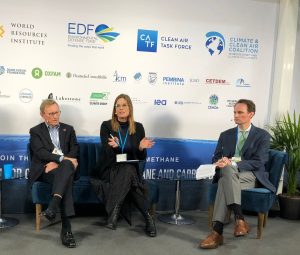 From left: Per Heggenes (IKEA), Kate Hampton (CIFF), and John Palfrey (MacArthur) discuss the methane pledge on a panel in Glasgow today.

The pledge is backed by many major climate funders, including the Hewlett Foundation, CIFF, the IKEA Foundation, and the MacArthur Foundation. The pledge launched on 11 Oct with commitments from around 30 countries and 20 funders with $223 million. Since COP26 began last week, the numbers have grown to over 100 countries committed and the funds committed now total $328 million, according to Hewlett President and CEO Larry Kramer speaking at an event on methane emissions at COP26 earlier today.

Getting methane under control is hugely urgent, agreed leaders from three of the foundations involved in the pledge at a panel today. CIFF CEO Kate Hampton, IKEA Foundation CEO Per Heggenes, and MacArthur Foundation President John Palfrey all sat down today in Glasgow to discuss the importance of pushing this work forward – and fast.

Today’s panel exploring the philanthropic role in reducing methane emissions comes just days after the first time a COP in recent history has hosted a major event on methane. Fifteen major methane emitters, including Brazil, Nigeria, and Canada, signed up to the Global Methane Pledge at Tuesday’s major event.

At today’s discussion, Heggenes noted: ‘Fifty per cent of warming comes from methane. What took us so long to get here?’ 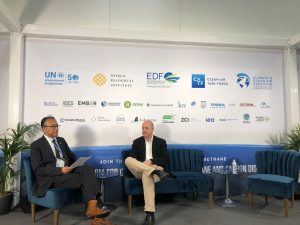 The pledge will seek to catalyse even larger sums of money and follows the playbook of the Kigali Amendment, which led to the pace and scale of potent hydroflourocarbons being removed and reduced. Kigali was kickstarted by a philanthropic agreement involving 18 funders and $53 million.

‘We learned from Kigali, and we’re now doing something bigger and faster,’ Hampton said.

Speaking earlier in the morning in a public interview with World Resources Institute CEO Ani Dasgupta, Hewlett’s Kramer expressed that he wants to see the impact of the methane pledge go even further.

For more on climate philanthropy at COP26 see our COP reporting portal, and follow @charleskeidan and @eroohi on Twitter.