Philanthropy Australia has unveiled a blueprint it believes can help double the level of structured giving in Australia over the next decade by encouraging actions across the philanthropic, not-for-profit, business, and government sectors. 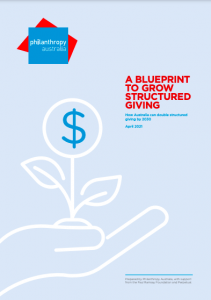 ‘There is an unprecedented opportunity to harness $2.6 trillion in intergenerational wealth that will be passed from baby boomers to their children in the next two decades. If we act now, we can use this to supercharge giving in Australia,’ said Philanthropy Australia in a statement.

‘A Blueprint to Grow Structured Giving’, which was launched at Philanthropy Australia’s national conference earlier this week, highlights a plan to double the $2.5 billion in structured giving that was estimated in 2020 to $5 billion by 2030.

However, Australian tax data from 2017-18 showed that only half of individuals earning over $1 million a year claimed tax deductible donations, compared to 90 per cent in the United States, according to Pro Bono Australia.

Boosting the percentage of wealthy donors will have a major impact on the nation’s giving levels, said Philanthropy Australia’s CEO Jack Heath to Pro Bono Australia. ‘We think that there needs to be a lot more work done around communicating the joy that comes from giving,’ Heath said.

For more information on the Blueprint, visit philanthropy.org.au.