I arrived at the 2015 Global Pro Bono Summit in Berlin on 24-27 February with lots of questions from my home, Cairo, the capital of Egypt. And after three rewarding days I learned that there isn’t just one right answer for every question and that in itself was an answer.

I am one of the co-founders of Sharek, which in Arabic means ‘participate or take part’. This is an online initiative that started right after the 25th revolution in Egypt to capitalize on the tremendous momentum and sense of affiliation that emerged post-revolution. Trying to maximize the role of the corporate sector in the development of Egypt at this critical moment, we established Sharek – the first corporate volunteer match online platform in Egypt and the Middle East.

Before I arrived in Berlin, I was expecting theoretical sessions that would only address pro bono as a concept and offer suggestions on how to improve our performance as organizations. However, it was much more than that. 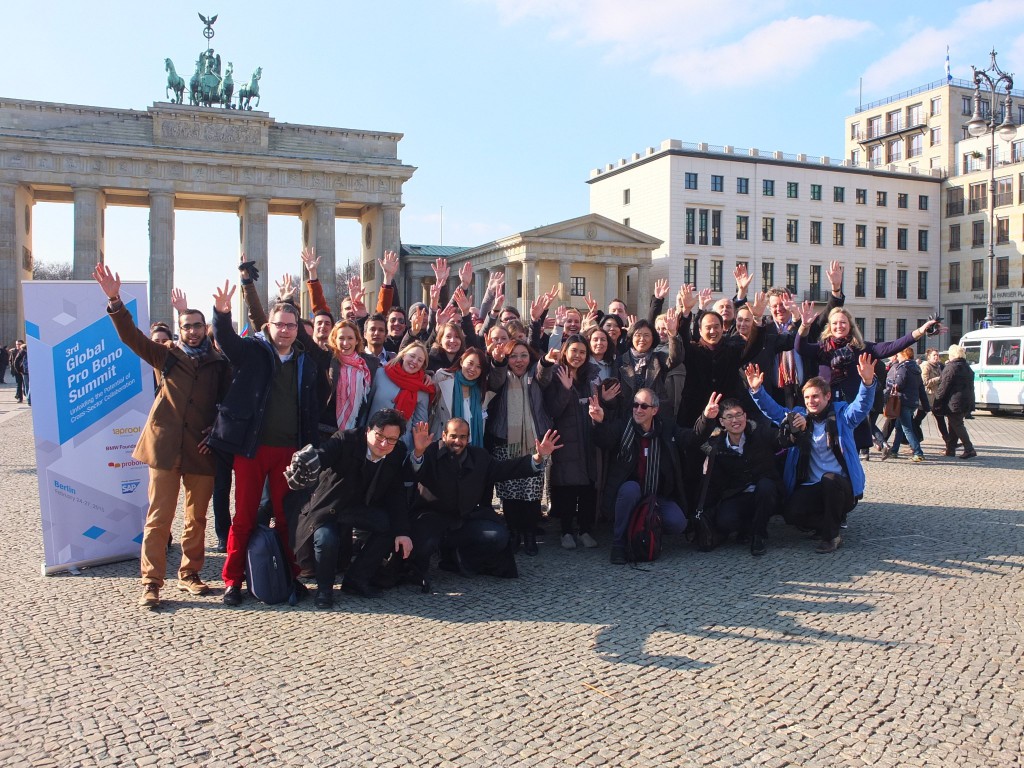 It was so inspiring to see the incredible energy and enthusiasm of 60 people from more than 20 countries including leaders of multinational corporations, government representatives, and the Global Pro Bono Fellows (an international group of pro bono leaders developed in partnership by the BMW Foundation and the Taproot Foundation – also the organizers of the Summit, along with Proboneo). The fact that we answered questions like ‘How can we make it work?’ in a similar but also very different way was very stimulating. The sessions addressed real issues taking place on the ground about how people perceived the notion of volunteering and how changes are influenced by the political and cultural dynamics of each country.

The discussions around the challenges we faced were rich, due to the various stages of organizational maturity represented. Advanced organizations like the Taproot Foundation from the US shared how they overcame early stage challenges, which was very beneficial to those still developing.

Moreover, the challenges participants from the Middle East are facing – like Bonum in Morocco or Ghadan in Saudi Arabia – sparked an intense debate. Across the region, young people are more interested in improving their communities and contributing to the long term development of their societies after the revolution. People are starting to realize that yes, they can use social entrepreneurship and volunteerism to create social change, start their own business or create awareness in their community. However the challenges are numerous, from the political instability to the lack of governmental support to the increasing poverty rates and more.

Additionally, it was very interesting to understand that non-profits everywhere are essentially experiencing the same needs such as capacity building, partnerships with the private sector, support from the government and human talents.

Feeling as part of the Global Pro Bono Fellows network that strives to promote a common goal around the globe is – to me – the real harvest of the Global Pro Bono Summit. Knowing that you have the support of all those great people from countries like Russia, Japan, Norway, France, Saudi Arabia, Singapore and Canada on ‘how to make it work’ truly empowers you to finally make it work!

Shereen Mady is co-founder of Sharek.