It is a core NPC belief that unrestricted funding is incredibly valuable to charities: it allows them to be more responsive, more agile, more independent, and more forward-thinking. NPC itself relies on unrestricted funding from a small group of individuals who support its mission and allows us to shared our thinking through topical reports, such as The Chancellor’s choice.

People who have worked in a charity with lots of restricted income understand just how useful it can be. George Monck, the CEO of CleanupUK (which is supported by one of NPC’s clients) says ‘I always think of unrestricted funding as being worth twice the value of the grant—unrestricted funding is the icing on the fundraising cake.’ Unrestricted income means not worrying so much about cashflow, being able to give high-performing staff a pay rise or respond quickly to changes without having to check first with funders.

Back in 2009, I co-authored Granting success which looked at unrestricted versus restricted grants. Recently, I have become concerned that the situation is now worse than it was when I wrote this report. For many of the small charities that NPC’s clients fund, these donors are now the main source of unrestricted funding. These charities have seen the core grants they used to receive from local authorities all but disappearing. This shift is also affecting other charities. The amount of grants local authorities give to charities has fallen from £3.9bn in 2008 to £2.6bn last year—many local authorities have moved to contracting for services instead.

Local authorities have made this change because of the pressure to show value for money. That’s understandable, it’s our money they’re spending after all, and one of the good things about restricted funding is that you know in advance what it is being spent on. But independent funders and donors have a great deal more freedom and do not have to give a restricted grant as the default.

In Granting success we outlined some questions that funders can ask themselves to explore whether they can offer unrestricted grants. Funders who have done their due diligence on an organisation, and share similar aims with their grantees, should be considering whether an unrestricted grant would have a bigger impact.

As our recent report on public sector commissioning showed, the charity sector is experiencing many changes at the moment. Local authority income streams are being cut, public fundraising is facing criticism, and new models of funding such as social investment require a significant planning and due diligence. From recent conversations I’ve had with funders, it is clear that many are worried about how no one has the time to plan. One potential way donors and funders can help charities to find the headspace many so desperately need is by providing unrestricted grants.

CleanupUK has found its unrestricted funding vital for planning its development. ‘Unrestricted funding is invaluable to a young charity like CleanupUK as it gives us flexibility as we grow and develop our fundraising. It also affords us the potential to build reserves and, therefore, sustainability.’ As we’ve said before at NPC, charities need to be planning ahead on how they are going to survive these changing times. Funders have a role in helping them.

Earlier this week I wrote about the value of unrestricted funding and how helpful it can be to charities. But the case has not fully been made without addressing one of the reasons that funders prefer to restrict their grants—which is a desire to see clearly the impact their funding has had.

Let’s say a grant is given specifically to train mentors who will encourage young people to go on to higher education. If half of these mentees then go on to attend university, it’s clear the impact that funding has had. That’s easy enough to measure. An unrestricted grant, on the other hand, may have been spent on a number of different things—it might have topped up that training budget for mentors, it might have paid for some of the chief executive’s salary, some new marketing materials, unexpected recruitment costs, or even the staff Christmas party. How can you measure the impact of that?

The diagram below shows how NPC considers the different types of impact funders can have. 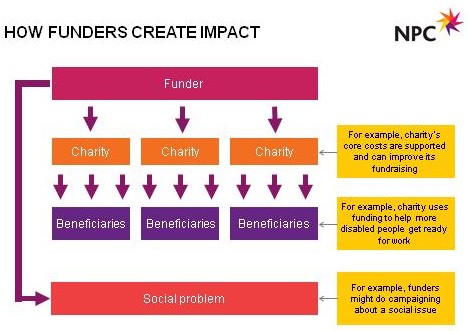 It shows that thinking about the impact of this type of funding is slightly different to how you think about the impact of a service. It won’t surprise you to know that NPC thinks that funders should be thinking about what impact their funding has on organisations overall. When funding is unrestricted, it has an impact on the charity itself (the diagram’s orange boxes)—its ability to plan ahead, to upskill and boost efficiency, or to retain staff. Unrestricted funding helps charities run better. The impact the charity then has on its beneficiaries is separate, but directly linked to this.

But unless you are a funder with the primary aim of building capacity in the charity sector, the impact you have had on organisations may not seem to be quite enough for you. If you’ve supported a charity helping young people into university, it was probably because you wanted your money to ensure that more young people do go to university—by directly funding a service to help them do so.

Yet NPC is very clear that charities should be run effectively, and that money spent on chief executives and fundraisers is very important. And because unrestricted grants are usually spent on core items such as fundraising or staff costs, without it there would be no charity, and no services. So your unrestricted grant is the foundation stone for all of the work the charity does. In a way therefore, you have some sort of claim over the outcomes of the whole organisation.

When NPC’s clients give unrestricted grants, this is normally how we look at it—that the funding has contributed to all of the charity’s work and its impact. Then, it is possible to ask: what is the charity as a whole achieving, and how does that match up to what we expect in terms of impact? Here, unrestricted funding is seen as a sort of collaboration, since it is not as straightforward as saying which outcomes are directly attributable to you, the funder. As Paul Hamlyn Foundation said in its 2012 impact report ‘We sense a growing acceptance by many funders that it is not always possible to claim attribution, and that convincing evidence of contribution is what we need.’

This isn’t always possible for funders—some who fundraise like BBC Children in Need, or get money from the tax payer, need to show a tighter link between their money and what it has been spent on. But, as I wrote in my previous blog, there are plenty of independent funders who don’t have these constraints upon them, who could provide a lot of value to charities by unrestricting their grants. It requires a different approach to thinking about the impact of a funder—namely a focus on contribution over attribution—but I think the benefits of unrestricted funding to charities outweigh the cost to funders.

Angela Kail is head of funders team at NPC.

This post originally appeared on the NPC’s blog. The original article can be found here>