Sharing is the most important attitude to data

Do we expect too much from data? This was one of the questions at the recent Alliance Breakfast Club which sparked much discussion around the topic of the recent special feature on philanthropy and data in Alliance magazine.

The event began with Jon Cracknell, director of Goldsmith Family Philanthropy, speaking about the way environmental funders have been collecting data, using examples from the recently published report Where the green grants went from the Environmental Funders Network (EFN). He illustrated the findings from such data collection by recounting how the cost of saving two Titian paintings for the UK was double the total amount foundations spent on climate change over a three-year period. Talking about the value of collecting data on funders’ activities, Cracknell argued that organizations certainly can’t do any worse for comparing what is going on, particularly as the cost of research is tiny compared to the amounts foundations often spend on projects. Many of those present agreed that the EFN report has been valuable to their work and believe this data has helped to increase the amount of environmental funding available. 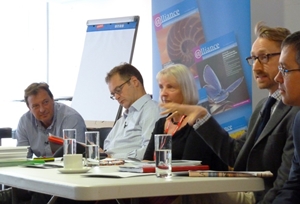 Cracknell briefly touched on the results of a survey which asked the same questions of those making and receiving grants. This demonstrated that these two groups have quite disparate views of what they feel should be their priorities. Steven Montgomery from Global Witness said that they had found it most productive to engage in meaningful dialogue with a foundation, which allowed funders to understand the background behind the data and therefore offer more long-term support. There was some discussion of the need for greater sharing of data and also of personal experiences, both among grantmakers themselves and between funders and recipients.

Director Chris West said the Shell Foundation aims to bring together social enterprises and funders. He sees their role as providing financial support in the early days to allow enterprises to mature sufficiently to attract the next level of investor. Interestingly, this neatly follows on from discussion at the Social Investor Breakfast Club the week before, which questioned whether responsible investors should be funding start-ups. West believes data is very important to grantmaking as it contributes to learning, which in turn informs strategy decisions which ultimately affect resource allocation. He feels that collective learning is needed within the philanthropic sector. It was widely acknowledged that organizations tend not to talk about their failures, despite the fact that shared lessons informed by data could be very beneficial to all involved. However, Diana Leat raised the important point that failure is not definitive but should be considered in context – and do funders have the right to broadcast the ‘mistakes’ of others, ie their grantees?

West also spoke of the difficulties of defining benchmarks and comparing data as so little data exists in this sector and it all comes in different forms. One important element of the subsequent discussion focused on whether it is possible to have a shared taxonomy when talking about data on foundations and their activities. They all measure success based on different values so the metrics are unlikely to be the same. Richard Graham from Comic Relief spoke of moves among the British NGO community to establish common metrics to better measure change and enable comparisons to be made between different initiatives. David Chapman from Monitor also raised the point that much research goes unreported and is therefore repeated numerous times; the context in which data is collected is just as important as the results, which is again an argument for further collaboration between those in the sector.

Mark Campanale, founder of Carbon Tracker and director of the Social Stock Exchange, said he had been surprised there was not more information available on the environmental impact of many individual companies. The data on this existed, but not analysed in a meaningful format.; Campanale said that the key thing about data is that often you have to be prepared to look at it in a different way. He outlined the work of Carbon Tracker, which demonstrates the potential impact that the data from one small study could have on the valuations of international fossil fuel companies.

Richard Jenkins, policy adviser at the Association of Charitable Foundations (ACF), raised the importance of data for influencing policy, noting some obvious gaps in the information available on foundations. He believes that having open access to data is key, as providing information on their activities forms part of the charity sector’s accountability to the public. However, Jenkins also suggested that data can be dangerous if people are too reliant on it; Diana Leat added to this by proposing that data can be seductive, as people hope it can answer questions for them and provide them with direction. The risk of being too reliant on data is that personal stories can become lost. West added to this by saying that while investments are informed by data, in the end one always invests in people, as they are the ones who deliver projects.

A key point emerging from discussion at the event was that it is important to remember that data is just a proxy and that it should always be considered in context alongside other sources of information. The general consensus was that more personal collaboration would be helpful to further collective learning within the philanthropic sector.

As Caroline Hartnell noted at the close of the session, perhaps the title of her editorial in the recent issue was wrong. Maybe data are just for geeks, and the rest of us care more about personal contacts and sharing individual experiences.

A video of the discussion is available at http://philanthropynews.alliancemagazine.org/september-breakfast-club-full-video/.

Comment: Crossing the mountains and building the bridges between NGOlandia and Bizworld | Latest from Alliance

Ah, the question of 'is' or 'are' - our editor debated that long and hard, have you read the magazine's editorial on the subject? https://www.alliancemagazine.org/en/content/data-aren%E2%80%99t-just-geeks