Calls for global approaches grow louder, but how can we unlock them?

Philanthropy is no longer a corporate tick-box

Putting a stop to child sexual abuse before it occurs

This article originally appeared on PhilanTopic, a Foundation Center blog, on 24 November 2014. The original article can be found here>

After we sent our November newsletter, other excellent blogs and resources from the philanthropy space about the Ebola outbreak surfaced. This blog is cross-posted with permission from the International Human Rights Funders Group. You can find the original article here, and subscribe to our newsletter for more spotlight content by registering for free on our website.

In December 2013, a two-year old boy living in Guinea’s remote Forest region died of a mysterious disease that went on to kill members of his family as well as people from his and other neighboring villages.  It took the authorities in Conakry over three months to confirm the cause of his illness was Ebola, enough time for the virus to take hold in these remote communities and spread to neighboring Liberia and Sierra Leone. Like other rural areas in Guinea and across West Africa, the people of Guinée Forestière have always felt far removed from the government due to chronic neglect and failure to invest in social services such as health, education, and infrastructure. 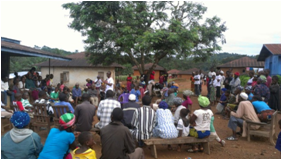 Nearly a year after the first case appeared in Guinea, the virus continues to spread at an alarming rate that is fast outpacing both local and international containment efforts. The epidemic represents not only a public health emergency but also a crisis of human rights and governance. Decades of underinvestment in health and social services, neglect of rural areas, widespread corruption, and lack of transparency have led to deep public mistrust of government and official institutions in the region. Thus, at the onset of the crisis, public health messages were interpreted as attempts by governments to attract donor funds, and health workers often came under attack and in some cases were killed by local communities.

The outbreak has overwhelmed the healthcare systems of the three worst-affected countries, leaving them unable to respond to other pressing healthcare needs, including those of children and pregnant women. There are reports of people dying from treatable diseases because several health centers have closed and health workers are refusing to treat people for fear of contracting Ebola. Progress made over the past decade in improving child and maternal health is in danger of been reversed.

The outbreak also threatens the political stability of these countries, which are recovering from years of conflict and political turmoil. In the absence of effective emergency response and disease containment strategies, governments in the region have resorted to using the military to enforce quarantine zones, impose curfews and lockdowns, and screen people entering major towns and cities. This militarized response has often led to human rights violations, raised tensions within communities, and added to mistrust of government.  In August 2014, attempts by Liberian security forces to quarantine residents of the West Point district in Monrovia descended into violence.

The outbreak has also led to serious stigmatization of individuals and whole communities that have been infected by or survived Ebola. This has been made worse by the response of the security services, which treat people presumed to be infected as suspected criminals. In Sierra Leone, grantees of the Fund for Global Human Rights (the Fund) report that names of individuals are often aired on radio and posted on social media and the public encouraged to report to authorities if they suspect neighbors are carrying the virus. This has led to a number of false accusations and stigmatization, which in turn have prevented some people from coming forward to be tested.

The latest available disaggregated data show that women and children are worst affected by the virus. In Liberia, the government reported in September 2014 that 75 percent of those infected with or who have died from Ebola are women, while UNICEF reported that women account for 55 to 60 percent of deaths in the three worst-affected countries.  As of yet there is no research to determine the reasons for disproportionately high infection rates, but anecdotal evidence points to the status of women as primary care givers as well as their limited access to health information. In late September 2014, UNICEF also released data showing that at least 3,700 children in the region have lost one or both parents to Ebola. These children face stigmatization and rejection due to fears by extended family members of contracting the virus.

While media headlines are focused on the international response, locally-rooted groups, including Fund grantees, are emerging as key actors in the fight against this outbreak. These organizations are using their credibility, local knowledge, and extensive networks of volunteers to partner with health officials to raise awareness of the virus and educate communities on modes of transmission and prevention. Local groups are also fighting stigmatization and helping to reintegrate survivors into their communities, monitoring the state’s use of emergency powers and resources, and ensuring that quarantined communities and vulnerable populations receive adequate support. Activists and volunteers from the affected countries hold the greatest promise in breaking the transmission link and preventing future outbreaks. This crisis should therefore be an opportunity for governments in the region to build trust and stronger connections with citizens and grassroots groups who are often at the frontlines of responding to community challenges and articulating their needs.

Although the international community has committed much-needed resources, local groups have largely been left out of the funding circle and policy discourse despite their crucial role in combating the disease. These groups also face serious challenges to maintain support for their existing work, as many governments and donors have diverted funds to dealing with the clinical aspects of the epidemic, neglecting the many social and human rights challenges in these communities.  Activists have raised concerns that vibrant groups and networks may be weakened or even destroyed if funding is suspended or reduced, reversing the significant gains in human rights movements since the end of the regional conflicts in the early 2000s. Already, a number of organizations in the region have started laying off highly valuable staff due to a freeze in funding. It is therefore crucial that human rights funders maintain support for local human rights groups and their efforts to respond to the crisis to ensure that these groups continue to function.

One possible approach is to allow grantees to reprogram existing grants toward responding to the human rights challenges posed by the outbreak. Due to the scale of the emergency, however, additional resources and support are required in the form of emergency and project grants. Funders not operating in the region have the option of contributing to a number of regional Ebola response funds, which are then able to leverage additional support for groups on the ground.

While the immediate response to contain the disease is crucial, equally important work starts after the end of the outbreak. Funders should therefore work with local partners in thinking through some of the post-Ebola challenges to ensure they are well positioned to respond. Some of the emerging priorities include supporting groups working to challenge stigmatization and promote community reintegration of survivors; strengthening the capacity of local communities, especially women, to respond to emergencies and natural disasters; strengthening transparency and accountability mechanisms; and advocating for increased government investment in health, education, and social services. Ibrahim Tommy, director of Fund grantee Centre for Accountability and Rule of Law (CARL) in Sierra Leone, observes that “to prevent future outbreaks of this magnitude, in the post-Ebola phase, attention should be focused on building local capacity and participation in disaster response, disease surveillance, alert, and referral; increasing allocation to social services such as health care and education; and building citizens’ trust in government by improving transparency and service delivery.”

To learn more, contact John Kabia at the Fund for Global Human Rights.

Additional Resources, shared by our friends at the International Human Rights Funders Group