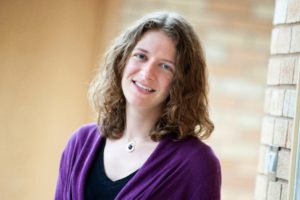 The Joseph Rowntree Charitable Trust has announced the appointment of Celia McKeon as its new chief executive.

She will take over from trust secretary Nick Perks, who announced earlier this year that he would be stepping down from the role after seven years.

Celia is currently a co-founder and coordinator of the peacebuilding network Rethinking Security and previously worked as assistant trust secretary at the Joseph Rowntree Charitable Trust for seven years.

Before this, she was a policy director at the international peacebuilding organisation Conciliation Resources and a Quaker representative supporting local peacebuilding initiatives in the Balkans.

Celia said: ‘I am delighted to have been entrusted with this role. The Trust’s charitable grant-making contributes to some of the country’s most inspiring and effective social justice initiatives, and its responsible investment strategy continually breaks new ground.

‘It will be an honour to work with the trustees and staff to build on the Trust’s rich history, and to continue to explore how best to exercise the privileges of being an endowed foundation in ways that support transformative change. I look forward to leading the organisation through its next phase of development.’

Celia will start her new role in September, and will be the first female chief executive in the Trust’s 115 year history.

Helen Carmichael, chair of trustees, said: ‘We are thrilled to confirm Celia as our new chief executive. Celia’s experience and strong track record on strategy, grant-making, leadership and communications are exceptional and her values align well with the Trust.

‘Celia was one of a strong field of candidates. Her passion and commitment to making a difference was evident throughout the recruitment process and has been demonstrated consistently throughout her career.

‘We are very excited by this new appointment as the Trust embarks on a period of growth and we look to shape the future with an increased spend and opportunities to reach and support organisations in new ways. We’re confident Celia will be excellent in this role.

‘We’re extremely grateful to Nick for his work steering JRCT so capably for the last seven years. His most recent work to lead the Trust through its decennial review has been crucial to planning our strategy for the future and leaves us in a strong position to hand over to a very worthy successor.’