Oxfam has been banging on to good effect recently about extreme global inequality in income and wealth. Over many years, we have also been making the case for universal health and education. It turns out the link between the two is stronger than I’d realized, according to ‘Working for the Many: Public Services fight Inequality’, a new paper published today.

We normally discuss inequality before and after tax (eg it’s progressive taxation that really brings Europe’s inequality down). But recent work published by the OECD and World Bank has put a monetary value on the ‘virtual income’ provided by public services. This produces some startling findings on inequality. 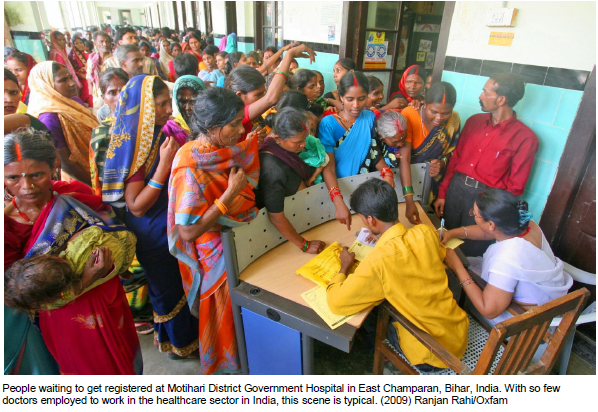 ‘Public services mitigate the impact of skewed income distribution, and redistribute by putting ‘virtual income’ into everyone’s pockets. For the poorest, those on meagre salaries, though, this ‘virtual income’ can be as much as – or even more than – their actual income. On average, in OECD countries, public services are worth the equivalent of a huge 76 per cent of the post-tax income of the poorest group, and just 14 per cent of the richest. It is in the context of huge disparities of income that we see the true equalizing power of public services.

The ‘virtual income’ provided by public services reduces income inequality in OECD countries by an average of 20 per cent, and by between 10 and 20 per cent in six Latin American countries (Argentina, Bolivia, Brazil, Mexico and Uruguay – see graph). Evidence from the IMF, Asia, and more than 70 developing and transition countries shows the same underlying patterns in the world’s poorest countries: public services tackle inequality the world over. 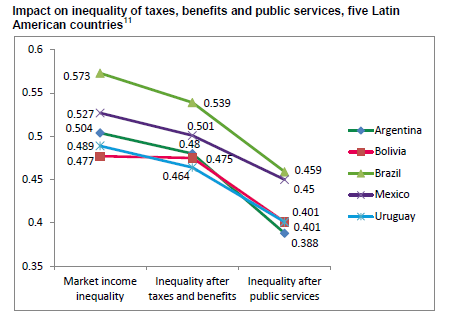 In Mexico, and even in Brazil with its award-winning Bolsa Familia cash-transfer scheme, education and healthcare make double the contribution to reducing economic inequality that tax and benefits make alone. But regressive taxation in many Latin American countries, including Brazil, is undermining the potential to combat inequality through fiscal redistribution, and preventing even greater investment in health and education.

This evidence underlines a double imperative for governments: to ensure progressive taxation that can redistribute once when collected and again when spent on inequality-busting public services.’

And seen through the eyes of inequality and redistribution, the private v public debate becomes even starker:

‘Far from being a magical solution to providing universal access to health and education services, private provision of services skews their benefit towards the richest. Amongst the poorest 60 per cent of Indian women, the majority turn to public sector facilities to give birth, whilst the majority of those in the top 40 per cent give birth in a private facility. In three of the best performing Asian countries that have met or are close to meeting Universal Health Coverage – Sri Lanka, Malaysia and Hong Kong – the private sector is serving the richest far more than the poorest. Fortunately, in these cases the public sector has compensated.

Services must be free at point of delivery to reach their inequality-busting potential. Health user fees cause 150 million people around the world to suffer financial catastrophe each year. For the poorest 20 per cent of families in Pakistan, sending all children to a private low-fee school would cost approximately 127 per cent of that household’s income. The trend is the same in Malawi and in rural India.

Smart and important work by Emma Seery and colleagues.

Duncan Green, strategic adviser for Oxfam GB and author of ‘From Poverty to Power’.

This article was originally published on the Oxfam GB blog on 3 April 2014. The original article can be found here>