But how do we unleash the power of philanthropy to be agents of development change? How can we tap into this community of philanthropists and leverage their ability to take risks and to innovate in sectors like education, gender or youth empowerment?

Better understanding foundations and how they view the 2030 Agenda will help us better partner with them. That’s why the Organisation for Economic Co-operation and Development‘s (OECD) Network of Foundations Working for Development (netFWD) unveiled a new circle typology to outline a fresh way to think about and understand philanthropies and their role in advancing the SDGs and well-being overall. 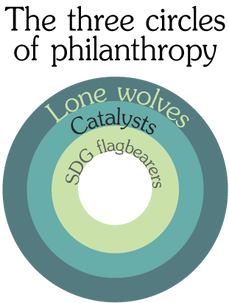 SDG flagbearers live in the smallest, inner circle of the typology.
These foundations have been part and parcel of SDG discussions from the outset, strategically reflecting on how they could contribute to their achievement and devising careful strategies and partnerships to do so.

Foundations in this circle are typically based in North America, with a few notable exceptions like the Aga Khan Foundation. This group is rather homogeneous compared to other philanthropies worldwide. The American philanthropic tradition of engagement to support social good along with the geographic or cultural proximity many of these organisations have to the United Nations allow them to embrace and follow the international development agenda more easily.

They are relatively big in size, and the annual giving (2014 figures) of the 50 biggest foundations ranges from $130 million to $3.5 billion dollars, which give them the means to engage on global development issues and have a strong voice in the development galaxy.

The catalysts occupy the middle circle of the typology.
Foundations in this circle focus on creating impact, having invested a lot in monitoring and evaluation and often having carefully crafted theories of change anchored in the concept of ‘shared value’. The latter approach, discussed by Michael Porter in 2011, argues that companies and philanthropies can bring business and society back together by generating economic value in a way that also produces value for society by addressing its challenges.

While mindful of the 2030 Agenda and the importance of connecting, middle circle philanthropists have kept their distance from international conferences and United Nations discussions. Rather, they showcase a willingness to test new ideas, adopt innovative approaches and forge new coalitions.

For example, the Shell Foundation helped launch a $100 million dollar fund, the GroFin ‘Small and Growing Businesses Fund’, for small and growing African businesses. Funding supports startups in Nigeria, Ghana, Zambia, Egypt, South Africa, Kenya, Tanzania, Rwanda and Uganda, and is projected to help over 9,800 entrepreneurs and create 47,000 sustainable jobs over the next five years.

Some within this circle call themselves venture philanthropists, which is a new approach to philanthropy. To simplify, this consists of working with social entrepreneurs and helping them through seed funding, marketing or management advice and access to networks to develop their businesses that, in turn, advance the common good in various ways.

Lone wolves make up the final, outer circle of the typology.
They may be the brainchild of high net worth individuals, families or large enterprises. They often have a life of their own outside the SDGs. They invest funds without necessarily consulting with other development actors or the governments of the countries where they operate. This outer circle is heterogeneous but characterized by input-driven approaches that are often isolated from measures of impact.

These foundations will, for instance, count the number of teachers trained or scholarships awarded rather than measure what students have achieved or whether they have found good jobs upon graduation. These foundations often consider themselves charity organisations. What they do not consider essential is partnering with governments or gearing their mandates towards achieving the SDGs.

While it might be easier to see philanthropy as a monolith, we see great value in recognizing and understanding the differences among the foundations working in these three concentric circles. So how can we best engage with the three circles to move the needle on the 2030 Agenda? Two principles should guide us.

First, we need to recognize philanthropy’s fierce independence.
It is critical to acknowledge that not everyone working in philanthropy is a viable partner on the SDGs. We need a differentiated approach to philanthropy, tailored to the comparative advantages and priorities of our partners to best determine who does and does not recognise the importance of the 2030 Agenda.

On the one hand, then, the inner circle of SDG flagbearers can add the most value, especially when we design specific coalitions around major SDG issues they care about, like addressing climate change, building sustainable cities or fighting inequalities.

On the other hand, we need to respect the prerogative of the lone wolves of the outer circle to support the philanthropic projects that matter to them. That is even the case when those efforts are not targeted at what governments consider to be pressing development priorities.

Second, we need to celebrate philanthropy’s ability to test new ideas outside of government channels.
Working with the middle circle of catalysts is most powerful and timely once they have tried-and-tested approaches in hand and are ready to turn to governments to scale up their most promising efforts. The catalysts might be amongst the best sources to deliver on the SDG commitment to innovation given their focus on new processes, methodologies and technologies to tackle various development challenges.

Guided by these principles, a differentiated approach to philanthropy allows us to concentrate our finite resources on delivering the greatest value and impact. In understanding the diverse agendas of our philanthropic partners by stepping into their respective circles, we are better positioned to start engaging differently — and arguably more effectively — which is precisely what the 2030 Agenda challenges us to do.

Bathylle Missika is Senior Counsellor to the Director and Head of Unit for Partnerships and Networks at the at the Organisation for Economic Co-operation and Development (OECD).