Feminist funders the Astraea Lesbian Foundation for Justice and Mama Cash have released a report on the lack of resources accessible to lesbian, bisexual, and queer movements. Titled ‘Vibrant Yet Under-Resourced: The State of Lesbian, Bisexual, and Queer Movements’, the report presents a picture of the current lack of resourcing for LBQ communities and makes a case for why increased and more effective funding is urgently needed. 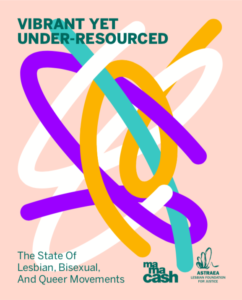 ‘Vibrant Yet Under-Resourced’, a report from Mama Cash and the Astraea Foundation

The report also surveyed foundation donors, finding that of the foundations who want to support LBQ communities, 67 per cent have no strategy in place to reach them. It also found that donors fund in siloed ways – though 85 per cent of donors were interested in funding activism across multiple issue areas, more than half of LBQ-specific funding came from LGBTQI portfolios.

Speaking to the urgency of funding LBQ movements, Chantelle de Nobrega, Program Officer for Body at Mama Cash said, ‘LBQ activists are changing the world. The work they do confronts the realities of violence and exclusion experienced by LBQ people, in social attitudes, in institutions, in laws and policies, in families and relationships… If we want to see LBQ groups not only hold the line against the rising tide of anti-rights politics, but also advance a radical politics of liberation, then we need to give them more to work with.’

Despite this lack of resourcing, LBQ groups have been emerging and growing worldwide to confront hostile social and political environments, as well as advocating for freedom and justice. The research showed a surge in organising over the past two decades, as well as reflected that over half of the groups were new, having been formed in the past ten years.

‘Vibrant Yet Under-Resourced’ is available to read here.